Skip to content
You are here
Home > Nick Farrell (Page 2)

From the blurb“The creation of a vault is a rite of passage for any Modern Golden Dawn Order. Creation of one a Herculean task and it requires a knowledge of as much of the Second Order material as possible. It is a moot point if you can ever be a real Golden Dawn Order unless you have made one.” The Order of the Golden Dawn had a magical machine which used colour to create a magical effect within its Adepts. The construction of a vault was the key to understanding the Golden Dawn system of magic. However, it remained a closely guarded secret and before the development of the computer creating one was a work of art which required a deep 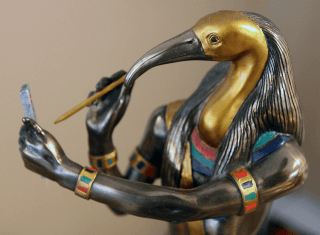 A long time ago a friend of mine Clive Harper published a list of what people in the Servants of the Light really meant when they said certain phrases.  I thought I would update it for the Golden Dawn tradition. I might add to itWhat Golden Dawn people mean when they say the following things:This is a Golden Dawn oral tradition:  I made it up.This is a Golden Dawn tradition:  Don’t blame me I didn’t make it up.This is a Cabbalistic tradition:  Don’t blame me, god made it up.The Golden Dawn used to do it this way:  My old temple used to do it this way.They are an independent order: No one wants to go near them.They are an independent

I have released 100 copies of this new hardback on Lulu (see link)http://www.lulu.com/shop/nick-farrell/what-my-heirophant-should-have-taught-me/hardcover/product-21405702.htmlThe blurb says:"One of the problems that many people on the occult path face is that few people will actually tell them them the rules. They blunder through making mistakes and having bad experiences because no-one has told them otherwise.. They might fail to see some crucial signs about a group that they want to join, or not be told the implications of their magical actions. The Chief Adept of the Magical Order of the Aurora Aurea, Nick Farrell, has gathered a set of magical statements which can answer all the sorts of questions you should be told by your teachers but were probably afraid to ask.

Beyond the Sun – the secret teachings of the Missing Golden Dawn Order  (click to order)“This book contains the Secret Inner Order Teachings of the missing order of the Golden Dawn – Whare Ra. Whare Ra managed to keep secret and above all keep running long after the other Golden Dawn magical orders had given up the ghost. Closing in the late 1970s the Order was founded by Dr Robert Felkin nearly 100 years ago. Working in New Zealand, Whare Ra became a secret forefront of occult teaching.Nick Farrell publishes the Second Order Rituals of this Order including the 6=5 and 7=4 in their complete and unedited state as well as the 6=5 training papers and lectures. He also examines the

For a long while I have described the Magical Order of the Aurora Aurea as a traditional Golden Dawn group. From today it is not and we will stop describing ourselves in that way.MOAA will no longer look to the past for any particular knowledge or security, but to its future.  And rather than trying to pour new wine into old skins we will be more secure in our own independence and ability to move in our own direction.   The word “Golden Dawn” has come to mean the tradition which encompasses all its off-shoots including the modern renditions of the Stella Matutina, Smaragdum Thallasses and the AO.  However most of these traditions do not run anything like the original Golden

For many years I have kept SECRET this most excellent ELIXIR which ALCHEMICALY TRANSMUTES even the most base of the animal kingdom into something tasty.  It was past to me by my on SECRET CHIEFS and I transmitted it to those of the most SENIOR BRETHRENin ITALY where they had heard of it not. It should be prepared after much prayer for the making of the SECRET SAUCE is not to be embarked upon lightly.  If it is prepared incorrectly it can partake of too much of OUR FIRE and not be pleasant.  But if you follow the MIDDLE WAY between FIRE and Water you shall find the elixir should transform into a REDDENING of pure Fire EARTH.It is ideal

After much arm twisting I am releasing the Osiris Scrolls as a strictly limited book on lulu.  It is a small hardback book and will be limited to 50 copies so it will be a collector's item.  It can be bought here  http://www.lulu.com/spotlight/Magus007From the blurb:The Osiris Scroll is a  modern magical technique based on the bedrock of the Ancient Egyptian Book of the Dead.  This work was compiled by the Chief Adept of the Magical Order of the Aurora Aurea Nick Farrell.This is cutting edge modern magic which works and is based on a manuscript which was only available to the adepts of his order. Using vision techniques, this book takes the reader though a through a series of magical

Yesterday a wonderful Jupiter talisman was sent to me from the American magician Rufus Opus who makes them for people here .  Rufus, along with JakeStratton Kentare one of the few people I know who actually make magical material according to the rules. My talisman was made at the hour of Jupiter when it was particularly comfy in Cancer.  It was blessed by Rufus in the expectation that it would be initiated by me when it arrives  (that is a reference to the Z2 documents).  You just have to hold it to know that this is a serious talisman which positively oozes Jupiter energy.   However, the owner’s manual that Rufus provided with the talisman got me thinking.The new cover for the