We arrived in Hong Kong in search of the secret of turning lead into gold. We purchased an old scroll from an Old Sage in Fai Hai and were making our way to the dock when were way laid by the evil Fu Man Chu and his associates.
“Give me the scroll of the Golden Flower of the Dogs’ Bollocks* for long have I sought the secrets of Alchemy and the ancient sages have not given them unto me,” said Fu Man Chu.
“And if we don’t?” I replied, clutching the scroll to my chest.
“Then you will suffer the curse of 1000 deaths without medical insurance,” he said.
My associate Little Tim yelled “Run” and we fled to the docks, closely pursued by Fu Man Chu and his men.
We arrived in the Hong Kong docks and found thousands of junks waiting for the morning tide.
“Quick,” I shouted. “Board that Junk.”
“But which one,” asked Little Tim.
“It does not matter,” I replied. “When it comes to Alchemy you can get away with any old Junk.”

* The phrase loses a bit in the translation.


Over the weekend we had a number of initiations and I was playing with the chemicals in the chemical change to make sure the proportions were right and we didnt end up with mud instead of something red.
Our temple uses Mohrs’ salt which is a double salt of ammonium sulphate and ferrous sulphate. It’s blue green colour turns red when it is exposed to Sodium salicylate. Both in solution are clear. In the old golden dawn the mix was a little different but the idea was the same. Iron indicator and Iron which turns red. Strangely Mathers’ AO attributed the Iron mixture to Venus and the indicator to Mars. In the coming revision to Mathers’ Last Word, I suggest it should be the other way around.
Anyway, during the ritual the candidate is told that the experiment conducted in front of the is to show what happens if they break their oath. This has lead some to think that it is where the oath is hardwired into the candidate’s sphere of sensation. But there are couple of things wrong with this idea. The most obvious is that the chemical change happens after the candidate’s elements are bought back together by the Kerux (since this was probably not a mini-ritual carried out by the early GD or the AO it might have been less important). 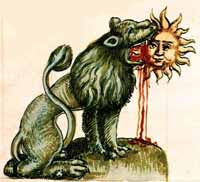 However as I was playing with the elements I noticed that he Mohr’s Salt gave a greenish tinge to the water. Worried that there might be something else in the water that it might be reacting to I looked it up. Achemists would have called Mohr’s Salt Green Vitriol. Which is represented by the symbol of the Green Lion. It often means the vegetable life force.
Then it occurred to me that by adding the Sodium Salicylate I was turning the Green Lion Red. Thus, under the cover of the threat of an oath violation, you were taking the lower aspects of the candidate and causing them to develop.
Now the reason I preface this with the silly story is that the Golden Dawn did not use Mohr’s salt or Sodium Salicylate. Mohr’s salt had only recently been discovered and certainly it would not have been available to alchemists. In short although the discovering is interesting and can be explained using Alchemical terms, it does not mean that the GD wanted this chemical change to evolve the candidate’s vegetative self. Yet, it would be equally possible for someone to cloud this part of the ritual with alchemical symbolism to have it make sense. As I say above… you can get away with any old junk when it comes to Alchemy.  It might be leading to new insights, but it equally it might not.

4 thoughts on “Alchemy and the Chemical Change”