I have had a few comments about the Lesser Banishing Ritual of the Pentagram use being overstated.  It has been something I have been saying for ages.  Below is an article published in the Hermetic Virtues Magazine Volume 2, Issue 3.

The lesser banishing ritual of the pentagram is considered the most important ritual of the Golden Dawn, in that it has been borrowed by almost every magical order in the last 120 years. Along with its chum, the cabbalistic cross, it is performed before every ritual. But have we made a mistake? What if it is NOT the lesser banishing ritual that is the most important, but the INVOKING one? 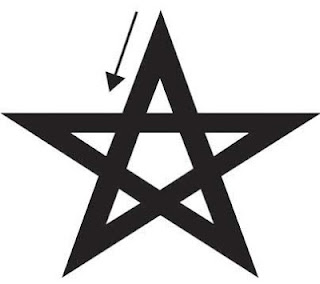 In my previous papers on the Lesser Banishing Ritual, I was looking at its use in terms of the Sphere of Sensation and the 0=0 ritual. I had come to the conclusion that the LBRP was a microcosmic re-enactment of the 0=0, which, if performed daily, would instill that important initiation’s symbols into the Sphere of Sensation. However, there was a flaw in this idea and that was the concept of banishing. Why would you need to banish all the time? True, the 0=0 ritual is about a four-fold purification and consecration but there is also the connection with the divine forces that is the opposite of a banishing.

The breakthrough came when I was talking with a very experienced magician who is not connected with the Golden Dawn tradition. She flippantly said that one of the problems she had with the GD tradition was that it was “banishing, banishing, banishing all the time. If you keep doing that you will have nothing left!” She believed that the Golden Dawn was told to do an LBRP before every ritual (which the modern Golden Dawn does). But was this true?

For years I had known that the Golden Dawn had an invoking ritual of the pentagram, but had never actually used it. So I wanted to find out what the original GD used – an invoking pentagram? – and I went back to the original instructions and knowledge papers to find out. 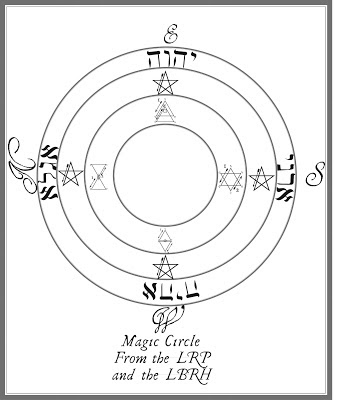 Surprisingly, the rituals of the pentagram papers for the outer order were consistent since the beginning to the closure of Whare Ra but what I saw when I read them was something I didn’t expect. For years, like many people, I had assumed that I knew the banishing ritual of the pentagram, so didn’t actually read the paper other than to check that I was saying the same words as everyone else in the order. Looking at it with fresh eyes, it revealed some things I didn’t know. Firstly, the ritual described is called the Lesser Ritual of the Pentagram – not the Lesser Banishing Ritual of the Pentagram.

Secondly, the knowledge paper does not describe the banishing ritual at all.

“Make in the air towards the East the invoking(1) PENTAGRAM as shown, bringing the point of the dagger to the centre of the pentagram….”

The banishing ritual gets an aside in the last paragraph of the paper; “For Banishing use the same Ritual, but reversing the direction of the lines of the Pentagram.”

The first thing that crossed my mind was that the Lesser Banishing Ritual of the Pentagram was considered much less important than its invoking cousin and is simply a footnote. This is the complete opposite of received wisdom.

In a second paper for neophytes, The Uses of the Pentagram Ritual, the projection sign is mentioned. The neophyte is instructed to imagine an image of an obsession and project it “out of your aura (sic) with the saluting sign of a neophyte and when it is about three feet away, prevent its return with the sign of silence.” The lesser banishing ritual of the pentagram is then performed to dissolve it.

This a minor point, but it certainly indicates that modern GD groups do their Lesser Pentagrams a slightly different way from the original order. This is fine, as the reasons used, i.e. the outwards projection of energy using the divine names, are valid and are an enhancement of the original idea.

However, it is also clear that, other than the reference to getting rid of obsessions, the banishing ritual is not any more important than the invoking one. Indeed, when the paper talks about using the lesser ritual of the pentagram to enhance visualisation skills, it is talking about the invoking and not the banishing.

Let us look at the other witness. Now, while I still think Aleister Crowley is the most over-rated magician since Paul Daniels, he is a valid historical resource about what he was taught about the ‘LBP’. His take on the ritual, which says that the little ritual is the key to everything magical, appears in Magic without Tears but fails insofar as it is not clear whether it is to the banishing or to the invoking that he refers. The fact that he refers to the rite by its traditional name of the Lesser Ritual of the Pentagram probably means that he is referring to the invoking pentagram rather than the banishing.

“This lesser ritual of the pentagram is only of use in general and unimportant invocations. Its use is permitted to the outer order that neophytes may have protection against opposing forces and might have some idea how to attract and come into communication with spiritual and invisible things.”

So now we have some idea of how the Lesser Ritual of the Pentagram is supposed to be used by those in the outer order and how it is just as important to use the invoking pentagram as it is the banishing one.

The banishing is designed to protect by repelling the sphere of sensation from lower astral nasties and connecting the person to their higher self. It can be used to remove those parts of your personality, such as habits, that you do not want.

In the 0=0 ceremony, the candidate starts with their sphere of sensation so black that it is impossible to see the four pillars of their sphere of sensation. During the four-fold purification process the aura is cleared. However, the candidate is also exposed to spiritual forces represented by the visible and invisible godforms. The danger, then, of just doing lesser banishing pentagrams is that you would not be drawing these forces to you.

Recently a person who came into contact with a temple I know said that he had been performing the Lesser Banishing Ritual of Pentagram every day for 15 years and had felt it had not got him anywhere. It was suggested by the head of a temple that he try the invoking pentagram instead and suddenly everything changed for him. He started making the spiritual and material progress he craved.

So it is clear that the obsession with the banishing pentagram needs to be tempered by the same amount of use as the invoking one. In fact, as a spiritual practice, they should be used at least on a 50/50 ratio with the emphasis being on the invoking.

The question, then, becomes how this can be done when we are trained to perform a banishing ritual as a form of protection before all our workings, including meditation. Well, the answer lies in what the LRP actually does. The GD material implies that both the invoking and the banishing provide protection, by virtue of the divine names, the angels and the pentagrams and the fact that the six rayed star is placed in your aura.

When you are drawing your spiritually-empowered pentagrams and calling up your angelic guardians, you are saying that you are human and manifest the elements of Spirit, Fire, Air, Water and Earth. You are asserting the dominance of spirit over the elemental nature. You are binding this statement into a magic circle, powered by the divine energy of your higher self. This is most of the protection you need. This divine force spiritualises the room so that anything that does not operate on that frequency cannot get in. All you need to do is to tune your sphere to either throwing things away or drawing things towards you.

The banishing protects you from internal and external harm when you need it. If you are being attacked by the denizens of hell, you would use the banishing ritual to get rid of them. If you aren’t, you don’t need it. The likelihood of the forces of darkness being interested in the first magics of a 0=0 is incredibly low, although it is possible that your own shadow might cause them a few headaches, so you might end up using a banishing more often than you think.

Besides drawing other forces to you, the Invoking Pentagram has a direct effect on the person performing it. Rather than becoming ‘guardians’ and ‘protectors’, the Angels and divine names work differently when you perform an invoking pentagram. What you are doing is drawing their energies into your sphere of sensation. Over a period of time this would have a tremendous positive effect on the person’s spiritual life.

While there is something to be said for the GD’s morning and afternoon alternating invoking and banishing rituals, it my opinion it would be better to do one ritual in the morning independent of any other rituals or meditations you might perform. This ritual would be guided by the phase of the moon. So you would do a banishing on a waning moon and an invoking on a waxing moon. You could then divide your magical programme into things you want to get rid of, in the waning moon, and things you want in your life in the waxing moon.

It also begs another question. Before each working, the temples of the modern orders of the Golden Dawn perform a Lesser Banishing Ritual of the Pentagram to protect the working. Since we have seen that the working would be protected by either the invoking or the banishing, it might be time to re-think this idea. It might be that the invoking is more appropriate.

Our modern orders have in many ways moved forward but perhaps it is time that the Invoking Ritual of the Pentagram was restored to its former glory and becomes the subject for more experimentation.