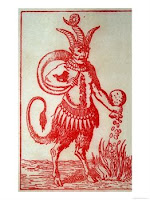 Recently I have been looking for an angel with which to do some material wealth magic. For many years I have used the usual suspects of El, and the Archangel of Jupiter and his assorted minions. This generally worked, but in an extremely general way.
However I started wondering why there was an Angel of getting the lids off peanut butter jars, but I could not find an Angel of money. There were plenty of demons and cacodemons I could call up but no good guys.
This creates a problem. If money can only be called up by demons then it means that ALL rich people are evil. Such a concept is stupid and is based on the idea that money is somehow evil and spiritual people don’t play around with it.
Unfortunately money is power and there are some cases where money is vital to managing occult goals. I went on a web page and found an expert cabblist who dug me up an Angel to call up and have a chat too. However the Angel in question is extremely obscure.
My thought is that modern occultists are being held up by religious views that are largely out dated. Since there has been no viable replacement for religion for at least 900 years we are stuck with symbols that need a rethink.