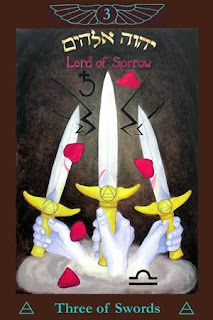 It is a perfectly straight forward question.

The student had a point. The order of the elements through-out the GD system are Earth at the bottom, Fire at the top. Next one down is Air and water sinks to be close to earth. All very hermetic and works right the way through the elemental system and the initiation system.

But not in Tarot where Mathers seemed to think water comes from Briah — possibly because rain is so architypal in Britain.. A teacher can stroke their beard, if they have one, and are a male (a female beard would be too distracting) and say “ah well that is the Yod Heh Vau Heh formula” but as an answer it is pants. The student can quite rightly say “You have just invented another system and stuck it to another system with blutac… c’mon smartie pants what the hell has Briah, or the archetypal world, got to do with water?” Once teachers were respected.

You cant say “well the Yod Heh Vau Heh stuff props up the elemental tablets” either. If it was so important, then the rest of the GD system would support it. More stuff than the Yod Heh Vau Heh symbolism suggests that the order of the element is Fire, Air, Water and Earth. The Kerux’s staff which is the first thing to smack you in the heart centre at 0=0 empirically tells you that. The Hermetica, which is supposed to be the GD bible says so too. So why does tarot tell us otherwise?

If you can answer see if you can do so without making reference to another part of the GD system… the answer has to say why in Tarot, cups and not swords are briatic….