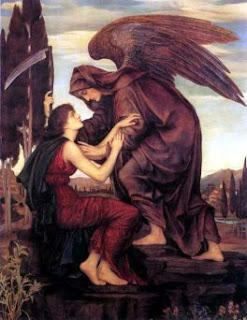 The idea of death is a key part of organised religion.  This has mostly been because the fear of death has been a method of control for society.  Many occult and religious systems try to place the idea of balance outside the material world of the living.  Thus they make the immediate afterlife a place of balance and judgement.  It meant that you didnt start looking for “evil people” to get their comeuppance in this life and no matter how terrible your life had been if you had followed the religious line you would be “safe”.  However such simplistic approaches to life and death have never really worked.  The biggest problem with them has been that they promise eternity.  Either eternal bliss or eternal damnation.  You might think that Pope John Paul II was a pretty nice bloke, but get saddled with him for eternity the novelty will wear off. Eat enough chocolate and it becomes hellish, imagine what an afterlife of perfection and rest would be like.
Then there is the idea of what makes up an evil person. Most people who are dubbed evil are unlikely to see themselves as such. Monsters like Hitler and Stalin believed that they were acting for the common good.

The eternity time scale is also incredibly unfair. Modern humanity has “three score years and ten” on this planet but the decisions that they make in this tiny period of history is supposed to set them up for eternity.

But the biggest problem for an occultist is “who does the judging?” Obviously religion says “god does it” however if the universe is made up of One Thing, and we are all expressions of it then it is really God judging itself. If you do a crime to yourself, assuming that such a thing is possible, do you condemn yourself for eternity or do you think to yourself “well I will not do that again”. If you do something good for yourself do you continue patting yourself on the back forever?
It is more likely that what happens after death is something we do not know and thus becomes the greatest mystery of all. The Ancient Egyptian religion came up with a very interesting roadmap of what it expected in the afterlife. It even shoved a Lonely Planet guide to the afterlife in people’s coffins on the assumptions that they could read it and know which ferryboat to catch if they wanted to get to Amenti.
But these are all fixed systems, created by humanity. Sometimes they ignore the fact that God is One Thing, other times they assume that humanity, or matter is so evil, that it must be escaped.

In my novel Tree Falls, I describe death as being a spark of life beginning a new adventure sailing off into the darkness. It was not bad but I am sure other people would come up with something better. The point is that we need a guide to the afterlife. For those of an Egyptian bent, the God Anubis is a good guide. However for those more interested in Judeo-Christian traditions the best guide is Azrael.
Azrael is the Angel of Death and his name and legend comes to us from the Arab Hebrews who remained in the Holy-land after the Roman genocides.
In one of his forms, he has four faces and four thousand wings, and his whole body consists of eyes and tongues, the number of which corresponds to the number of people inhabiting the Earth.
However in another form “he” is a “she” who is seen as a beautiful compassionate woman dressed in black. It is this more benign form, which is connected to the sphere Binah, the great mother, which we will be using. If you think about it, death is a birth into something new. You are leaving behind the womb of materiality into a new existence.
The way to communicate to her is to enter in your imagination to a triangular temple. The walls and ceiling are made of lead. On the ceiling in polished letters is the name Elohim.

In the centre is an altar upon which burn three candles. Visualise this as clearly as you can and say* :

Listen, all creeping things –
the bell of transience.
In the name Elohim I call upon the Angel of Death
Come forth into thy temple Azrael
Leaves have their time to fall,
And flowers to wither at the north-wind’s breath,
And stars to set; but all,
Thou hast all seasons for thine own, O Death!
Is childhood ever long enough, or a happy time, or even
a beautiful summer day? All of these carry the seeds of
the same fierce mystery that we call death.
Through winter-time we call on spring,
And through the spring on summer call,
And when the abounding hedges ring
Declare that winter’s best of all:
And after that there’s nothing good
Because the spring time has not come–
Not know that what disturbs our blood
Is but its longing for the tomb.

Come forth my Azarel
Open thy mysteries of Death
Show me the secrets of the doors of horn and ivory
Teach me the reality behind the story.

If you want a more cheerful one you can say:

Come forth Azarel
Into thy secret and sacred temple
Show me the secrets of the doors of horn and ivory
Open thy mysteries of Death
Teach me the reality behind the story.
Show me the path from manifestation to the unmanifest
Transform me from the scorpion to the eagle and the phoenix
Write my name in the book of life so that I shall be one of the twice born.
Guide me on the great adventure away from pain to joy
From sadness to happiness
From the fragmented reality to the One Truth
The light behind all colours
You who are the transformer
Transform me with thy mysteries.

Allow a few minutes and then see Azarel appear to you. Since you are not ready to die yet, she will appear as a teacher. She will certainly not appear as something you should be frightened of.
Ask her your questions and see what she says. Remember that some of the answers will be clouded by your fears and preconceptions so they will need to be meditated upon.
When you have finished asking your questions. Thank Azarel and ask her to depart and then do a banishing ritual of the pentagram.

* This invocation was knocked together from several famous poems by different authors with bits added by me. It should give you the right feeling to call Azrael .