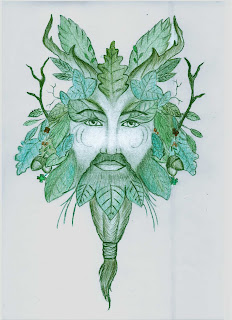 Gods are very important in the pagan religion but their role in Magic is a little less clear. My personal belief is that their is only One Thing that takes on lots of different roles. Paganism and modern paganism in particular with its Goddess obsession does as much to move me as the Christian idea of a male God. However the question then comes to the idea of worship. How do you worship One Thing? The sort answer is that you don’t. It is as vain as worshiping yourself. You are part of the One Thing so you are just saying to another part of yourself how brilliant you really are. This is silly.
But I use Godforms a lot and so the question is what sort of relationship should you have with them?

Terry Prachett said in one of his books Lords and Ladies:

If you replace the idea of believing in them with worshipping them you get where I am coming from here. I don’t believe in worshipping gods any more than I might worship an aeroplane which takes me on holiday. Gods are masks, bits of the One Thing, which I use to get me from one state to another. A god or a bus it is the same thing. Now I can worship the One Thing through one of those fragments but it ends up being the same as worshipping the coffee table.
The Bible is full of references to “not worshipping idols” and what I think is meant here is don’t worship fragments. Both you and Gods are fragments you are both equal so kneeling before them is not a good idea unless you BOTH are kneeling before the One Thing.
Gods are creations of the created tools to understanding… you don’t want to go around worshipping them it only feeds their huge collective egos 🙂 .
The universe is made up of stories. When you use a godform you are choosing to look at he universe through one lens and through “one story”. There are many stories but you benefit from understanding the world through many different ones (it is when people think their story is the only one that people start getting burnt at the stake). In Aurora Aurea when we adopt a god form we are putting on a mask to understand a story or an aspect of the one thing which is above all stories.
Magicians are not priests. We do not have the job of bringing one story to others to believe in. We are looking for the story that suits us and living it.
So I see the Godforms as realised aspects of myself with the power to do more than me because they have a bit more history. But I don’t think I would ever go around worshiping them.
BY the way the beautiful Green Man picture on the left  is one of Paola’s.