Last night during a troubled sleep I realised that Geomancy was not mathematically binary in that a dot was not one and a line was not zero. This becomes important when looking at elemental theory applied to Geomancy. Modern Geomancers tend to see a dot as representing an elemental power switched on (One) while a line as an element switched on.

However binary mathematics requires the use of zero as a decimal place holder. So one plus two would equal 10 while in geomancy it would have the same value a line (or two dots).  Olcam would say that 1+2=3 (is an odd number and therefore 1) is a more logical way to create a geomancy reading.

Christopher Cattan (Geomancy 1591)talks about odd and even points but does not mention elements being on or off. In fact his elemental attributions would be incorrect if elemental active or passive lines were used, Cattan attributes Laetita to Air and yet the only “active line” is Fire.

My theory is that it is all to do with geometry as it brings to the table a few more ideas which help in a divination.

A point in geometry is a location. It has no size i.e. no width, no length, and no depth. A point is shown by a dot.

The number one is a symbol of unity. The Pythagoreans did not consider one to be a number at all because number means plurality and 1 is singular. However, they considered it to be the source of all numbers because adding many ones together can create any other (positive whole) number. If one is added to an even number, it becomes odd; similarly, if 1 is added to an odd number, it becomes even.

So in an elemental line a dot represents the divine source of the element which is above matter but bound to create it.  In geomancy it means that an element has started manifesting… it is like the new moon for the element.

A line is defined as a line of points that extends infinitely in two directions. It has one dimension, length. The number 2 symbolises many of the basic dualities: me/you, male/female, yes/no, alive/dead, left/right, yin/yang, and so on. Dualities are common in human approaches to the world, probably because of our preference for two-valued logic—yet another duality, true/false.

The line in geomancy represents elemental energy which is bound in matter.  It is strong for now but is weakening (like the full moon) .

It is important then to note that none of the geomantic symbols are fixed and each line is in a state of movement and changing to something else.  Each symbol contains all four elements in various states of completion.

A long time ago came a man on a track
Walking thirty miles with a pack on his back
And he put down his load where he thought it was the best
Made a home in the wilderness
He built a cabin and a winter store
And he ploughed up the ground by the cold lake shore
And the other travellers came riding down the track
And they never went further, no, they never went back
Then came the churches then came the schools
Then came the lawyers then came the rules
Then came the trains and the trucks with their loads
And the dirty old track was the telegraph road

Via is all potential all its elements are starting to manifest; hence it is the journey into becoming while Populus has the destination reached and a town built with a couple of pubs and a cinema.

What is interesting is that these attributions better fit the names of the geomantic spheres and the original (pre-Agrippa) attributions. Via is Moon in Leo and Populus is moon in Capricorn.  Via must lead to Populus and Populus must eventually lead to Via (but depending on the order of the change all the geomantic symbols could be contained within it).  Populus then is like the Universe card in tarot. It represents a successful establishment.  It could be positive or negative but it has been created and works.

Let us look at some other geomantic symbols: 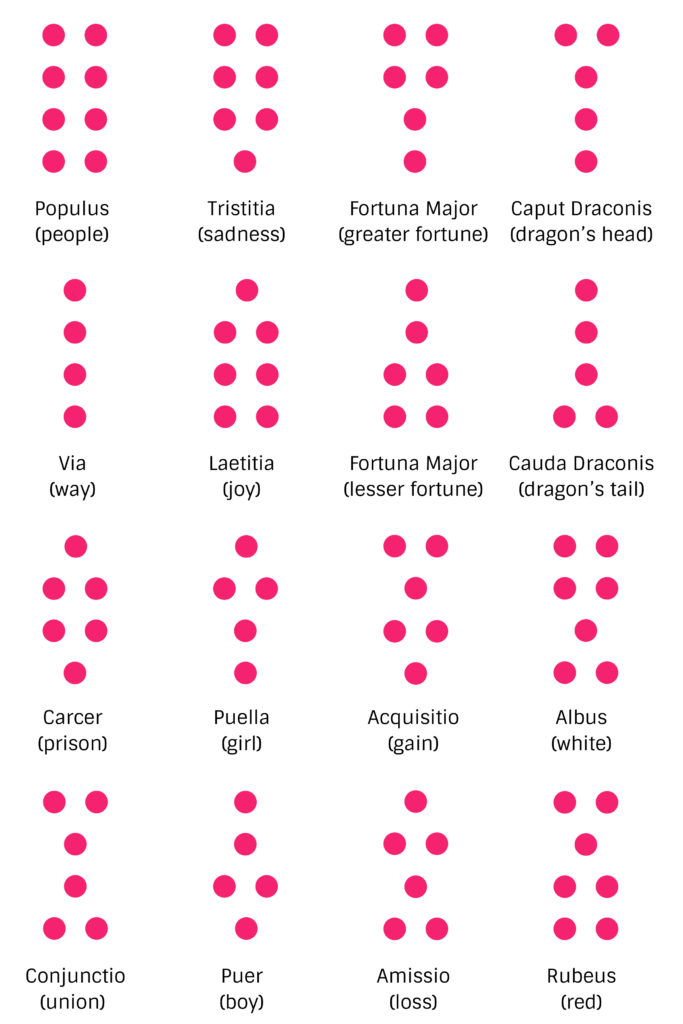 From its structure we see that all the elements are developed (like Populus) other than the line of Air which is just beginning.  What this represents is a mental change in people and structures.  It is the principle of a person in a society having a revolutionary epiphany.  Eventually this will settle down depending on how much damage this developing thought does to the rest of the structure.  Populus is slowly changing and Rubeus could bring about change to the rest of the system. With Mars and Gemini attributed to this figure we have the concept of a change of thought which, if restricted or blocked, could create anger but it could equally create dramatic even violent change.   Gemini is superficial and easily bored when connected to Mars so if change does not happen quickly blow up, get bored and slope off.  If all things stay the same, then Rubeus becomes Populus and the status quo.

Another geomantic bad figure with a traditional astrological meaning of Saturn in Pisces and is associated with restriction. The figure has fire and earth developing while air and water developed.  Earth then which is the great limiting element is building at the same time as the spiritual fire.  The spiritual fire effectively is demanding more matter (which is normally its opposite) and more shackles. It is like the Tarot key the devil which represents natural/ Divine force (fire) within nature (earth).  Carcer then is a spiritual focus on the material and physical (and if none of the other lines change will move to Populus and the prison becomes civilisation or an established pattern).

Laetitia (Joy) is a positive figure with the astrological meaning of Jupiter in Taurus.

In this we see that all three bottom lines have reached their point of stability and only the fire line is beginning to develop (and will change eventually to Populus). The spiritual fire awakens within the otherwise sleepy limitations of Populus. It might not last, but it will bring happiness and wealth.  If we look at all the other geomancy symbols with fire starting to unlock (Carcer, Cauda Draconis, Puer and Puella they have features of fire awakening to change things)