Skip to content
For many years I have kept SECRET this most excellent ELIXIR which ALCHEMICALY TRANSMUTES even the most base of the animal kingdom into something tasty.  It was past to me by my on SECRET CHIEFS and I transmitted it to those of the most SENIOR BRETHREN 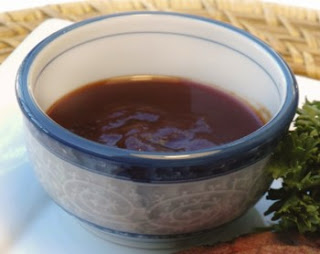 in ITALY where they had heard of it not. It should be prepared after much prayer for the making of the SECRET SAUCE is not to be embarked upon lightly.  If it is prepared incorrectly it can partake of too much of OUR FIRE and not be pleasant.  But if you follow the MIDDLE WAY between FIRE and Water you shall find the elixir should transform into a REDDENING of pure Fire EARTH.
It is ideal for transmuting the charred flesh of the BBQ into something which tasteth nice.  Indeed many have claimed that it is a MIRACLE of MYSTICAL SCIENCE.

Take then the following.
1 Tablespoon of the purest olive oil.
2 cloves of the bulbs of Alliaceae (Garlic)
3 cm of Gingiber (Ginger)
1 Escalonia  (shallot) finely chopped
1 teaspoon of the grindings myrtle pepper  from the e Greater Antilles  (All Spice)
1 teaspoon of the grindings of Sinapis hirta (mustard).
2 teaspoons of the spice made by the Turks of Broda (Paprika)
1 teaspoon of the grindings of Capsicum being a member of the nightshade family, Solanaceae (Chilly powder)
230gms of dark brown sugar
400g of Tomatos
280mls of the MOTHER OF VINEGAR (red wine vinegar)
2 tablespoons of the Sauce of Worcestershire
Salt and pepper
Over a medium flame warm the oil in a saucepan. Add the garlic, ginger and shallot and cook for three minutes.  The vegetable matter should be transformed by the heat to the colour of the Sun.
Add in the Allspice, mustard powder, paprika and chilli powder and stir for no longer than a minute.
Add the sugar and stir for 30 seconds or until the sugar takes on the nature of caramel.
Add the Tomatoes, vinegar and Worcestershire Sauce and stir 20 times clockwise while reciting a Paternoster or the Orphic Hymn to Mars.
Raise the flame and simmer for 15 minutes.  The sauce must be exposed to the sunlight.  Do not simmer with a lid on for that will create a sauce of great evil.
When the time has passed. Take from the heat and allow to cool to the temperature of blood. Then liquidize until it is smooth.
Season with salt and pepper.
Pour into a sterilised bottle. It is best left in a cool place for 24 hours for the sauce to transmute and its flavours to arise.
Share on Facebook Share
Share on TwitterTweet
Share on Pinterest Share
Share on LinkedIn Share
Share on Digg Share