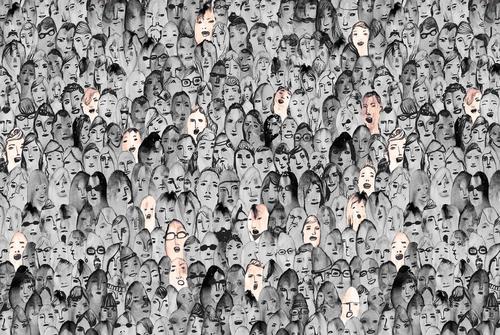 Occultism is full of some strange personality types and if you are part of a group you are almost certain to have met them. The following list is not meant to be an attack, I I have been several of these myself. The list started to create itself in my head when someone on Facebook said “what is the most common occult personality type.

The Armchair Occultist: A person who reads lots of books and mistakes this for actual practice. They will often correct people for doing things wrong, but are unable to cite their own practical experience. They will say that they have been involved in magic for many years, but never find the time to do a meditation or ritual.

The Perpetual Student: Enthusiastically studies and follows the path but never actually progresses. The will often switch groups, or systems, but never change as a result of the experience.

The Tourist: Has an extensive occult career in many different groups or systems but never follows one completely and thus gets nothing from the whole experience. They rarely stay in one group long enough to have any real experiences. Sometimes they fixate on a group or system but always leave before they have a chance to get anywhere.

The organiser: The organiser is the person who does everything in the group. They offer their homes for meetings, arrange workshops etc. But they do not actually do any magical work themselves. They are far too busy organising.

The Leader: The leader is someone who, often from an early age, wants to lead an occult group. Less interested in the magical work, they will often display a superficial knowledge to convince their followers that they should be in charge. If it comes to a choice between magic and leading they will always choose leader.

The Teacher: The teacher is a variant on leader. Often, they have a great deal of knowledge but they want people to acknowledge the fact usually by sycophantic behaviour. They are natural autocrats whose views may never be questioned. They often talk about the role of the teacher, but if you swap the world teacher for God you understand where they are coming from.

The Fundamentalist: Someone who is desperate to find some certainty in the world by a literal interpretation of occult teaching. They will cite documents or books as “proof” and get really pissed off when you point out that the occult path is evolving, or developing. No sense of humour and does not find any of this funny.

The dark fluffy: The dark fluffy is a person who thinks occultism is all about having a cool image. Unfortunately, that image involves wearing black and wearing lots of silver jewellery. Magic to them is a Hammer Horror film. They will talk about dropping acid and summoning a demon to serve them, but often still live at home.

The Goddess: The Goddess is more common in Wiccan groups. She is someone who makes the Goddess in her image, which is to say generously proportioned and autocratic. She always takes the key role in a ritual, particularly if it carries with it a lot of respect and ritual bowing. She is likely to say that you are not bowing to her, but the goddess, but it is clear that you actually are. When involved in a ritual, it what ever role they take, the ritual is all about her.  I have not met a male equivalent, they tend to fall into the other categories.

The Orphan: Often seen with the Goddess this is someone who is looking for a father or mother figure because theirs was so shite. They will project their idea father or mother image onto the group leader and worship them as if they are a god or goddess. It works fine until the person fails to live up to their expectations and they will then have a childish fit.

The experimenter: The experimenter is someone who wants to leave their mark on magic by tinkering with existing systems. They might have good ideas, but more often they did not understand the system that they were working with in the first place. While they are correct that experimental work is vital for magic, they often will waste lots of time reinventing the wheel, or the lesser ritual of the pentagram to “improve it.”

The Narcissist: This person makes the mistake of thinking that when occult teaching calls you an expression of the One Thing they are the One Thing. Godform work does not mean they are working with Osiris but are Osiris (worship me please). This is not an occult thing, it is just a narcissist who also happens to be involved in occultism.

The Magician’s partner: This is the person with no magical talent of their own who latches on romantically to a magician who is really doing the work. They bask in the reflected glory and they tend to receive status within a magical group without doing any work. They will often rabidly defend their partner without really being aware of what they are talking about.

The New Age flake: This person who sucks up new age ideas like a sponge and reagitates them when they are in the presence of others. They are completely and utterly naïve and easy to convince that drinking their own urine is a good idea.

The Mason: This is a real mason who has joined the group and thinks that people will be interested in how their group is a direct reflection of some grade in masonry which they happen to have. They are like the joiner, only there is a definite masonic theme. They will often tell you stories of how life was when they were “in the chair.” They have tendency to think that every ritual is like one they do in Lodge. Don’t ever ask these types “If masonry is so great why are you here?”

The conspiracy nut: Given occultism is supposed to be part of the great conspiracy, you will find a surprising number of people who espouse conspiracy theories. It would not surprise me if the Illuminati really had a bunch of owl eating members who insisted, against personal experience, that the illuminati were trying to take over the world. Having been outted as a lizard by once conspiracy expert I tend to think conspiracy nuts are best avoided (or eaten).