Skip to content
Someone asked for a magical worldview which did not incorporate re-incarnation, or Karma and yet did the same sorts of things.   Here is a basic Egyptian one which can be used to find answers to many different questions and also slots in nicely to the Golden Dawn.
There was never a beginning or an end, just darkness.  Well, when I say darkness I mean everything and nothing.  The Ancient Egyptians called it Nun.  Then this being, which until then could only be described by what it was not, decided to be something. It created an idea of a universe. That idea was called by the Ancient Egyptians Thoth – the Mind of the One Thing and he created more ideas, or words.  And the words formed Stories. 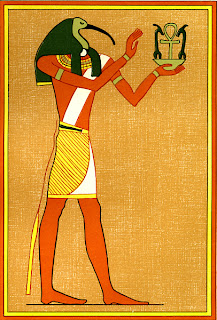 The first he created was the world of spirit, which was centred on the idea of light.  That light was called Ra and his light was divided into seven primal energies.  From were formed the Gods, Angels, and spirits.  These forces interacted and reacted within stories and above all they learned and remembered these experiences and thus was the great memory of God created.  And this memory was within and like a kingdom and is remembered as being the Underworld.
Gods were Ideas and were too perfect, too close to Thoth and Nun for either to understand much about itself. And so a new realm was created which was ruled by Osiris and Isis and was born within the underworld.  Ideas from Thoth past through the realms of spirit, into the realm of the otherworld and while this realm was not as perfect, it still did not provide an objective clarity to Nun and Thoth.
So a final realm was created, that of matter and this was built from the images that were found within the memory of god.  And thus was creation made. Matter crystalised from the underworld to the outer world.  And reflections of the underworld were made solid in creation.
Then Thoth had an idea.  One of the images found within creation would have the ability to understand all the levels.  But for the idea to work, the image would have to learn and study the levels around it and awaken them.  Thus this image would mimic the powers of Thoth himself.
This idea was called by the Ancient Egyptians, ank, or the spirit of God and it past into the world of spirit where it slept.  But so holy was this sleeping ank, it awoke as a new being, the Ba or soul, which existed in the realm of spirit.  But it was not aware of the ank within. This spirit then moved into the realm of memory, or the underworld where it slept and dreamed itself part of a race of Apes which lived in creation.
Thoth did this countless times until each human had the potential to begin the awakening.  But because each ank passed through each of the levels of creation before they were born, they had dim memories of what they were capable of doing.  Each ank inside them dreamed of a destiny.
Most people experience creation through the realm of the underworld and when they die, they return to the memory of God where they are one with their ancestors.  Others however become aware of their soul and seek the spiritual path of Ra and awaken to that state and live in that God’s kingdom.  Far few realise that that too is only part of the journey.  They must awaken the ank within them and return to Thoth and the borders of Nun and be aware of all things.
All these levels are the same God, all experiences are valid and important.  Then ask why do people suffer?  Why are some lives short and others long?  Why do wicked people succeed?   They are all the One Thing acting out countless stories written by Thoth to give an understanding to itself.
Suffering is caused when we mistake our masks for the actor behind them. At each level, we have a role, even if that role is to sleep.  But if we chose to awake, then we gradually become aware of our powers to shape our story. A person who is awake in the underworld has mastery over the earth.  A person who dwells in the realm of Ra is a God and he who awakens with Thoth is a God above all.  These are people of whom Thoth has written great stories only when the story began, no one but Thoth was aware of it. Everyone is equal because they are all the one thing. it is just that people have different jobs to do and have different roles in the bigger story.
Share on Facebook Share
Share on TwitterTweet
Share on Pinterest Share
Share on LinkedIn Share
Share on Digg Share