On the subject of printing secrets, we have this little controversial book which was released a couple of weeks or so ago. The book covers a few of the papers which were stored in the Slater Collection which are later AO.
The information created a controversy when someone who is sitting on a pile of photocopies from the Slater Collection insisted that one of the articles were “forged” and the book was a “fraud” because he didn’t have it in his collection. In fact, all 12 papers are real and from the Slater collection and the writer deserves an apology, at least on that score.
For these 12 papers the book the 122 page book is worth the price. But the real problem is that the book shows little effort in presentation. 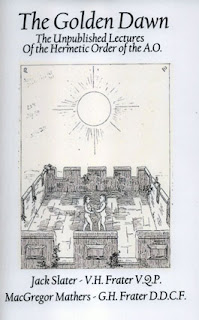 To produce a book like this you have to do more than simply print the papers. You have to explain the material and place it into context. The author has done little other than defend his actions in publishing “secret material”. You really don’t know what you are looking at or why, everything has just been chucked together without a theme or a thread linking them.
The diagrams have mostly not been redrawn and have been scanned in. This is actually quite useful because you can work them out for yourself rather than risk something important being missed.
The typeface is ugly and where Greek is used it is not translated. I would have not used the Greek and written the translation out.
According to AO expert Tony Fuller, who actually owns many of the documents printed here, there are a few mistakes and missing information. Judging by the way it is all laid out I would be inclined to believe that is possible.
The enochian papers use enochian lettering, which is unusual. This becomes significant when you consider that it was this material that was injected back into Whare Ra and the other Golden Dawn Groups in the 1920’s. However none of the Whare Ra Enochian papers I have, use the Enochian lettering.
There is an interesting paper on the LVX formula which hints at more than it is telling and a 6=5 paper on the Seven Branched candlestick which is useful but you have to wonder why it would be given such a high grade.
Anyone interested in the Golden Dawn tradition should buy this book, but they will be left with a slight feeling that they have been cheated.  It could have been, and should have been a lot better.  As far as secrets go, it proves my point completely.  You can have a 6=5 paper in your hand and I doubt many would even realise its value.