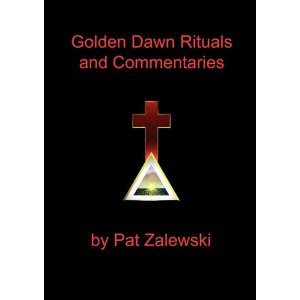 FOR MANY years now it has been possible to set up a Golden Dawn group based on Israel Regardie’s book perhaps supplanted with a few “unpublished manuscripts” picked up elsewhere. If a subject was too high-level you could shove it into the higher grades where few would ever see it.

You could argue that your’s was the one real Golden Dawn. Most of these groups run rituals like Masonic orders. Indeed they tend to attract masons who always seem to be on the look out for something new to join. Rituals are read from the Black Book 6th Edition Regardie and the value of the ritual, and the skill of the Hierophant is decided on the basis of how well it was “performed” and the psychological effect on the candidate. There is a very good argument to suggest that the Early Golden Dawn was exactly like this. A sort of hermetic co-masonry where women were admitted.

But for those of use who are interested in magic that is not what the Golden Dawn is all about. Many of us take our Golden Dawn from its more magical off-shoots such as the Stella Matutina and the AO. But how the fact is that the Magic stuff is only hinted at in the papers that have been left behind. I do not believe that anyone could create a truly Magical Order from nothing other than Regardie, however well developed the Golden Dawn Tradition is.

Pat Zalewski was lucky. He met with a bloke who left the last surviving Golden Dawn group in the 1960s before it went down hill and shut down in the 1970s. His mentor was a bloke called Jack Taylor who was raised to the grade of 7=4 by none other than Mrs Felkin. Jack was able to give Pat a crash course in the practical aspects of the Golden Dawn as it was experienced by him.

Pat has written many Golden Dawn books but this one Golden Dawn Rituals and Commentaries is truly the only attempt I have seen to place all of the magic back into the Golden Dawn tradition.

It takes you through the magic used within the Golden Dawn rituals and provides you with a Hierophant’s handbook. It uses the complete rituals, provides all the diagrams that were cut from the Regardie version.

Of course there will be those who wish he did not publish this book. For a start it is clear that the Hierophant needs a level of magical expertise and concentration that many don’t have. An order needs a degree of practical knowledge that cannot be found by having all the robes right and being able to shout the loudest. A book like this shows how a Order should be and the level of magical sophistication and skill required. It shows the glaring holes that exist in the magical ability of the “play orders” out there.

The question has been raised about how much of the magical information given here is from Pat, or Jack and how much of it was real Golden Dawn. Such questions are usually asked by those who believe that what Mathers or Westcott was doing was the true “fundamentalist” way of the Golden Dawn. These are the types who believe that magical techniques are carved in stone and handed down by god along side demands to stop looking at your neighbour’s arse.

The book clearly identifies what is Pat’s ideas, and what is Jack’s and what comes from elsewhere. I know that most of the ideas contained in this book were also agreed with by some of the Whare Ra adepts I met. Others were not. Jack was a Magus, he was not a fundamentalist follower of any born again Golden Dawn cult. I was equally lucky to see many of the ideas used in this book put into action by those in Whare Ra and feel their effects.

Pat does bring in new ideas. Some I agree with and others I don’t. But I have also put them into practice and a lot of what is written in this book not only works, I would actually say that you are wasting your time in the Golden Dawn system if you were not applying them.

Another question is whether this information should be left tucked away from people to see. The point is that it was nearly lost because people followed the traditional way about shutting up over important stuff. Information like this is what makes a spiritual tradition. It is the ritual in action rather the ritual in form. The ritual provides the ingredients, people still need to know how to make the cake. In the Golden Dawn’s case magic has been allowed to slip out of the system and needs to be shoved back in.

What I find interesting is that many Hierophant’s in the modern Golden Dawn will not be able to run a temple ritual according to Pat’s methods. They might pretend they can, but I don’t know many who can effectively do what is written here.

But equally I can find few modern Golden Dawn people who can argue with the reasoning. You have to talk from experience to know if something works or doesn’t.

Golden Dawn Rituals and Commentaries is really the sort of book every would be Hierophant should write at some time in their life. You have to show people who follow you, what you did, and what you added to the tradition. However it is also the book that every Golden Dawn magician should have and use it as the touch stone for their own magical work. They might disagree with something in it, but they can say “Pat says this, but…” and such a thing furthers the tradition.

Equally, however they will find many challenges to the way they work the system. In short Golden Dawn Rituals and Commentaries tells people to cut the bullshit and do some proper work and sets up a the magical yardstick.

Anyway this is a book you need.  It is very very big and heavy andI am not even going to begin to pick it out here… there is not enough space on the world wide wibble.  However it is well worth the price.