What follows is a Geomancy reading.  I did the reading as the first shots were being fired, so at this point the results are unclear.  On an initial reading, I realised the question was more complex than I anticipated as will be the results. This reading did however match one I did earlier. The method I am using is based on Christopher Cattan and can be found in the second edition of my book Star and Stone. This is a 10th house question 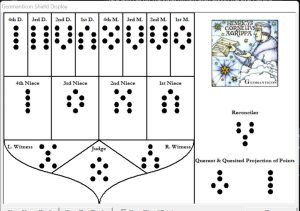 Left witness (The Question) is Conjunctio and the Right Witness (Russia) is Fortuna Minor and the Judge is Amissio.

The Judge agrees with the Right Witness that Russia will “win” the war in Ukraine. However, Amissio is bad figure, so while it obtains its objectives, it loses significantly in some way. The left witness is a good figure for a minor short term fortune. This means it obtains some of its objectives (enough to declare a victory) but it cannot hold onto them for long. Conjunctio as a left witness probably indicates some kind of agreement or treaty that contains what Russia wants. With the Judge clearly saying a Yes there is no need to look at the sentence, but if you did you would see it is Fortuna Major which is a total victory for Putin.

Russia represents the right hand of the shield and the way of points goes all the way to the first house which is a bad figure (carcer). Russia sees its motivation as self-defence and protection of its borders.  There is some depression about the country and perhaps it is a move to stimulate the country and become more positive with a war.  Putin’s objectives are probably smaller than most people expect and easily obtained without having to take on the whole of Ukraine.  There is no way of points up the left side of the chart.

There are 27 single points and 33 double points so the chart is stable and there is unlikely to be much in the way of change.   This adds up to 100 points so victory is going to be very slow.

The Chart comprises eight negative figures and five positive figures. This is generally bad for the question. Russia is the first house and is a bad figure Carcer.  Ukraine is a bad figure too (Rubeus) however it is a good figure for war.   The Cardines are mostly bad figures so this is going to be a mess The fourth cardines is Jupiter. Cattan says that the ruler of the day the reading is made should be one of the cardines if it is going to be “true.”

Russia moves to the 11th house which suggests it is moving to defend groups or its borders. The move to Ukraine’s 12th house suggests that it wants to (or will) put in a more Russia friendly government.

Neither side is in the company of another so both sides are on their own. Ukraine looks more threatening than it appears and the Russian army might actually find itself on the defensive.

Adding the two figures together we get Puella which suggest that there will be a peace agreement.

Russia’s finances are depressed (perhaps sanctions) and movement seems difficult and slow. It is only able to make an erratic movement (Via). It does get what it wishes (whatever that is).  However, the war is unpopular  (either the Ukrainians, including the Russian minority fight back or there is opposition at home) this is Populus in opposition.   Ukraine is flat broke has the support of Populus and makes an erratic movement forward. In fact, they make some gains that surprise the Russians who expected to overrun the country.  Ukraine’s opposition is Acquistio which disagrees with the war policy of Rubuis  (not sure what to make of this). It might be that too much Aries makes them overconfident or rash or given the position that the result where Russia gets territory to go away angers the country.

The Cardines give a general sequence of events for the story.  It shows Russia trying to shore up its borders (Carcer) and protect itself, finding a full-on war (Rubeus), and finding the people against it. The end of the story will be some form of a face-saving solution including territorial gain.  It declares a total victory and sends its troops home.

Other readings say that what is left of Ukraine is not happy (other readings have suggested that it blames its government) as it considers that it won even if it lost. Interesting about all these readings, both sides lose and both claim to win.