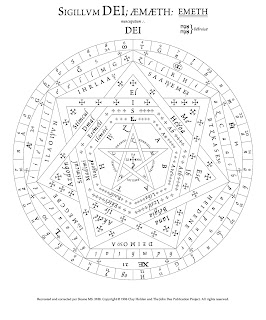 There is a moment after you have received your 5=6 where you are sitting in your temple, your elemental weapons are consecrated and you are left wondering what to do next. True you might have shed-loads of papers given to you buy your order, but these are practical and experimental.
It is a very lonely feeling. You know that, despite the fact you are in an Order, what you do from now on is your own work.
No longer are you told “you must do this”, it is up to you to follow your path alone and as an individual. It is therefore not surprising that once people have reached a 5=6 they duck out of the GD and go and find something else. The strange thing is that “something else” could easily be included within the GD system. The Inner Order is such a wide series of concepts it is possible to hammer in any aspect of the Western Mystery Tradition within it with only a couple of knocks. However this approach is the opposite of the fantasy image of the GD as a physical order with intellectual teachings that take you from cradle to grave.
Anyone who is great in the Inner Order has carved a path of research of their own, usually in the form of a speciality. My take on the Inner Order is different from another Adept in the same Order, let alone others who might be members of other groups. One of the reasons is that within the GD the second order is not as tangible as the outer. True there are people running it within a group, but they are more symbolic in comparison to your own work. The only requirement is that you have to show up once a year to swap notes with others in your group. That is not enough to build a significant egregore on the lower astral, and therefore any group mind is formed at a higher level over many decades.
This is one of the reasons why the search for lineage within the higher grades of the Inner Order is a chimera. It is not simply a matter of ‘if you are doing the work it is more important than any grade you might hold’. It is that you are carving your own path through the intellectual information and finding your own spiritual direction within a system. If you are not doing that, you have no grade. There is no one who can really give you a grade, other than your own Higher Genius. Nor
is there anyone who can give you a certificate to tell you are connected enough to the tradition to initiate another. Most grades in the GD are pretty subjective, but often it comes down to what other people in the system will acknowledge you are and what you can do. In the case of Pat Z for example he has rescued information that could have been lost after the end of Whare Ra. But more than that his own personal work has managed to breath new life into it. the fact that he has managed to present that to others, in his books and his own group is an bonus.
However if you read between the lines of his books, it is clear that his own ideas and experimentation with GD concepts have given him the understanding to move the system on in his direction.
The work of the Inner is to make the work ‘real’. Lineage is something that is handed from one person to another, but it is a shadow of what it should be. It is a symbol of a spiritual lineage which is not handed
down from one person to another on a piece of paper. It is a connection to the Second Order, which is by far above all that, and links you to the innovators of Magic going back to the dawn of time. This is one of the other reasons I find the search for the Third Order so amusing. It is often carried out by those who have not truly found the nature of the Second Order.