Around the time I was involved with setting up the Nottingham temple of the HOGD I was invited to join Masonry.  The Lodge which invited me was a more esoteric group which had been formed by former members of the Stella Matutina in the 1940s and met in Grand Lodge in London.  The lodge did not meet often and the grade progress through the three degrees was appropriately slow. 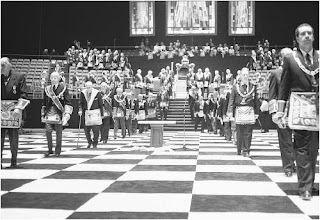 I went to the third degree but never got to take an officer’s role but did get to see what masonry was all about and for that I was grateful.  In the end I left the UK and resigned.
However there were elements about masonry that I simply could not get my head around which would have meant I would have left anyway.  Firstly, although the ritual was superbly performed, there was an absence of magical energy that I was used to seeing in Golden Dawn rituals.  It was possible to pick up psychic things happening, but these were nothing like what I would have expected from a magical initiation.  When I described them to others they looked at me strangely and moved away.
Although the people in the lodge were great people, and all of an esoteric bent, they were not magicians and it reached a point where I ran out of things to say and sat quietly.
Although I was invited to join other masonic groups, everyone said I should have been in SRIA and the Rose Croix and possibly the Templers. But I could not see the point.  Magic, and specifically Golden Dawn magic, was my main interest and they all had the same sorts of structures which made masonry dull for me.
The closest I came to joining another Masonic style group was when I was involved with the Order of the Rose and Cross.  This was being set up by some prominent masons along masonic guidelines.  However it appeared that it was a more mystical form of the Golden Dawn based around the teachings of Waite.  Several members of the GD signed up for it and the Order acknowledged our grades.
However I never signed an oath or even visited in a meeting (I was living in Bulgaria and never went to London).  The issue with that group for me came down to a fairly benign paper which I wrote about the tomb of CRC.  It was rejected by the hierarchy and while that did not bother me so much (the article was later put into Hermetic Virtues) the reason why it had been rejected was the reason I left. I was told that the chiefs felt that the paper was too practical, and they were not interested in providing instructions for practical magic.  That is fine and acceptable, it is just not what I want to do and talk about. So I left.
I have had nothing to do with the masonic approach ever since.
However you will find me talk about the masonic approach in my books and writings.  I define it as a system where rituals is performed without magic to create a psycho-magical effect on the candidate.
It has a use, however I do not believe it is as effective as performing a real magical rite.   People told me “you can see where the GD came from with masonry” but to me it was like comparing a horse and cart with a modern sports car…. yeah the principles of the ritual were there, it was just that the car was going to do something faster and better.
You will find with masonic style organisations that they are a bit like a charitable club which happens to have a ritual attached to it.  I took part in a Rotary meeting once, they are very similar.  Any real information is about the organisation itself with some spectacular knifings and arguments.  Some of them made the rows of the GD look tame by comparison.
I think the saddest thing I saw with masonry came was when I visited a US masonic lodge.  I saw this wonderful huge lodge and thought what I could do with that much space.
I was speaking to one of the oldest members in their huge restaurant. He told me his only reason for living was the Lodge.
“Why is that?”  I asked.  I thought it might be the symbolism of the ritual which had not lost its shine after all those years.
“Because next year I am going to get my 50 years badge, it gives me a reason for carrying on.  And when I die, they will stick my name on the ceiling of the lodge and stick a black ribbon on my picture in the hallway,” he said.
Share on Facebook Share
Share on TwitterTweet
Share on Pinterest Share
Share on LinkedIn Share
Share on Digg Share