While I wait for the secret chiefs to show up I need to clarify what it is that I am waiting for. Many people have misconceptions of what I am ACTUALLY wanting to see.
Firstly I am not, like Samuel Mathers, looking for a secret chief who ghosts in and does not say anything.  Nor am I looking for a chief who contacts me in a dream or in a meditation.
I am specifically looking for a physical human being who can be touched and can provide the grade signs and passwords of MOAA.
Why is this important?  Well in some ways it isn’t.  If a secret chief came to me in a skrying session can provided me with the valuable teaching then I would test it and use it on its own merits.
A physical secret chief on the other hand is similar to believing in superman. According to Zanoni and other places where they are mentioned they are practically immortal and are eternally young and wise.  So therefore we are looking at something which does not provide information, or directly assist in a Magical Order, but are the embodiment of magic itself. 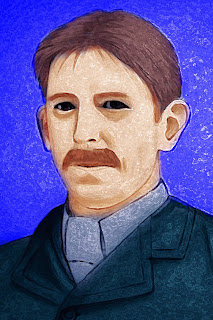 The fact that they exist physically is very important.  Because, at a stroke, it overthrows all perceptions of modern magic.  It does not matter how much great names like Crowley or Dion Fortune studied, or if Alex Saunders really was a magical genius.  All their work will be rendered null because they did not meet a secret chief in the flesh.
You can see how important this is.  If there are a panel of secret chiefs operating in Europe then they have done so completely free of any contact with modern occultism.  This means then that modern occultism and its methods must be completely flawed.
However if Secret Chiefs do not have a physical presence and are just human adepts much like Sprengle, who gave permission for the GD to form, then there is nothing to worry about.  There are a lot of references within modern magic to Inner Plane beings of various sorts which provide connections and teachings.
By showing up, Secret Chiefs would place modern magic at a cross-roads were everything in the last hundred years or so was junked.  Orders which have been formed without their backing would have to close and give way to Orders that had the backing of these physical chiefs.  It would not matter if your Order had lineage, or a court order which gave you the right to exist, if a Secret Chief had not confirmed your right to teach people you would not have it.
This is the scenario of those who claim that secret chiefs are important.  They off course claim that they have seen these secret chiefs.  They do not provide proof but expect us to believe that on faith.  We have no idea, for example, if when these groups met their physical secret chiefs, they tested them with their own order’s passwords.  Certainly Paul Foster Case did not, but then, his meeting with a secret chief was probably not in the flesh. Personally I would not hand over control of my spiritual direction, or the spiritual direction of students, to a complete stranger who did not know the most basic information about my Order.  But then some people, including Mathers, were completely naive in that way.  He failed, for example to test Madam Horos in the way I am suggesting.  Had he done so he could have saved himself some considerable bother.  It is possible that those who claim they have met secret chiefs in the flesh may not have done so, but are just dealing with another Madam Horos case which has yet to reach its final conclusion.
Still we will all know on August 5, if the Secret Chiefs have not shown up physically at their appointment, and provided the passwords and grade signs.
Share on Facebook Share
Share on TwitterTweet
Share on Pinterest Share
Share on LinkedIn Share
Share on Digg Share