I have had a few questions about the diagram I drew yesterday showing the underworld.  Yes it does mean that I am saying that Dee’s Enochian Aethyers are part of the Underworld and in Christian terms subject to demonic influence. 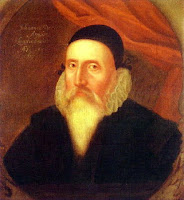 In many ways this explains some of the problems that Dee had with his angels, something that people like David Goddard and Paul Foster Case blamed on the scrying of Kelly.  However, if the Aethyers were part of the upper underworld, then it would explain the erratic visions of Angels that people get when skrying them.   It would also explain why Chorozon, who is the Devil, in Dee’s system resides amongst them.
It is one of the dangers of having fixed views. Kelly and Dee saw their system through Christian eyes.  They could not understand that they were not looking at Angels, but were most likely looking at Underworld gods and beings.
Their system also lacked one of the more important safety valves which is part of the Underworld and therefore material magic.  In some ways the Golden Dawn made matters worse by recognising that much of the Underworld’s population were elemental creatures and gave adepts the keys to attempt to control them through Elemental Kings and Tablets. 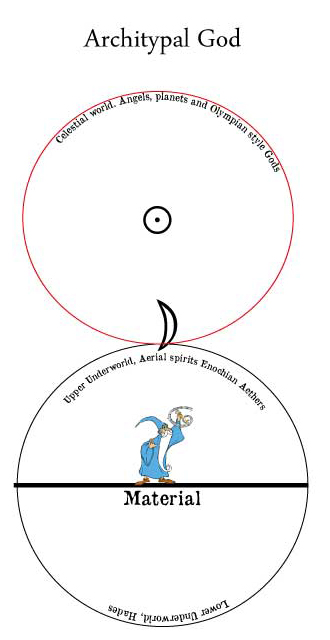 If you look at my second diagram you can see that the next level of magic, that of Solar/ planetary forces has to pass through the lunar levels (ie Yesod in Cabbalah) to have an effect on the material level.
This explains why in earlier magic, most of the Underworld stuff was  conducted under the control of lunar gods and goddesses in particular Hekate and Selene.  The deeper underworld was also further controlled by Dis Pater (Hades or Pluto) and Prosephone.
Ignoring the moon has some fairly dire consequences for magic which requires a material effect.   If you did a solar working to heal someone and did not use the lunar forces, the only way for the solar force to manifest itself is through the path of Hod or Netzach.  These are the paths of Shin and Quof and both are fundamentally unbalanced water/fire mixes which would have difficulty manifesting in Earth.  Yet the same force reflected through Yesod is Tav which is a Saturnian Air/ earth mix and more likely to be a balanced.
Dee, Kelly and the Golden Dawn by not acknowledging that what they were doing was underworld, and not having a lunar contact to translate the solar forces were forcing their visions down these more chaotic and unbalanced paths.  It does not mean that they were seeing corruption, just that you need a translator.
Much of the difficulty that people have with lunar contacts is that much of the teaching about them makes them fairly chaotic.  It is hard to find many people describing Hekate with the same loving terms that they would Demeter – even Selene gets a better press.  But this ambivalence was also common in the ancient period too.  Hekate started off as a semi-benign Great Goddess. She evolved through her association with the dead and magic, to be connected to fear and death.  She was partly redeemed by the Neo-platonists in the Chaldean

Oracles, before her “witch credentials” made her a figure of fear for the Christians.
But it is through this particular contact that magicians will find “power” not only of the astral, underworld and material forces, but also as a reflection of the celestial world.
So how would this work?  For a start it would mean that hermetic magicians would have to acknowledge working in the astral, but it would also mean that they need to have made some contact with an astral force.
In the Greek Magical Papyri there are references to magical helpers who are clearly astral beings who are designed to assist making magic have an effect on the material plane.  These concepts were corrupted as witches familiars before being promoted to magical holy guardian angels, before ending up as simply astral contacts and guides in the late 19th century.  The idea of a magican working to obtain a lunar assistant, perhaps under the protection of a moon god or goddess makes a great deal of sense.  This “familiar spirit” (ie one you know)  might be the missing link that units your underworld with the celestial realm.