This week the pre-release of a new book written by the leaders of the Golden Dawn Community was announced.  This book  Commentaries on the Golden Dawn Flying Rolls by the Golden Dawn Community (ISBN 978-1-908705-07-5), due to launch on 14 June 2013.  The book’s release is important on a number of different levels.
Firstly the Flying Rolls were instructional papers circulated within the historical Golden Dawn.   They were never released in a complete package before and some of the copies which were circulated publically had missing diagrams.  Israel Regardie had hacked some of the Flying Rolls to fit the publishing constraints of his book. He also missed some very important ones.  Francis King issued some more in the 1980s but also missed some which he did not consider were important.
This list is based on that issued by Wynn Westcott before the split and includes some late ones which were written soon afterwards which were considered official.
In its own right that is interesting, but what makes this book important is that there are commentaries from the senior students and leaders of the Golden Dawn Community.  These explain the flying rolls in modern terms and in some cases place these documents in their historical context.
The writers include: 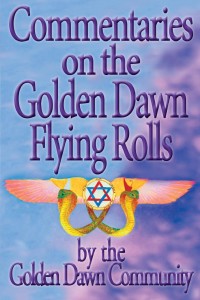 Frater A.M., Frater AR, Deanna Bonds, Christopher Bradford, Chic Cicero, Sandra Tabatha Cicero, Ian Cowburn, Morgan Drake Eckstein, Nick Farrell, Paola Farrell, Lauren Gardner, Jayne Gibson, Frater Goya, VH Frater IOV, Aaron Leitch, Liza Llewellyn, Joseph Max, Frater Philomancer, VH Soror QQDAM, Samuel Scarborough, Eric V. Sisco, Rachael Walker, Sam Webster, Harry Wendrich, Peregrin Wildoak, Frater Yechidah, Frater YShY
Wading through that list and the wide range of Golden Dawn groups that these people belong you start to realise that the level of cooperation that exists between these different orders must be considerably higher than many would have you believe.
The truth is that the modern Golden Dawn groups have not been at war with each.  While we do not agree with each other, we have enough in common which means that we can, and do, work together.  Many outside the Community do not realise that.
When you think about “Golden Dawn Wars”, and “Chiefs with clashing egos” you might wonder why people say that when the Golden Dawn leadership is getting down to serious work TOGETHER and PRODUCING material.
This takes a lot of effort with no financial reward at all.  This book has been produced by the Golden Dawn Community to raise money for the GD Legal Defense Fund which is a non-profit organisation.
This is the beginning of similar projects which are being worked out by the Golden Dawn Community and we can expect to see some more in the future.   These will include papers by groups who were not able to provide papers for this book, due to time commitments. 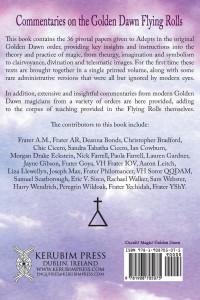 There is a lot of material which is available which has been developed by this living tradition based on the original material which never sees the light of day.  This is because many mistakenly believe that the Golden Dawn material was all published by Israel Regardie.
While this is not the case, even if it were, it would just the starting point for what modern Golden Dawn groups are doing and taking their members.
What this says is that the Modern Golden Dawn is fragmented into different groups, which have become increasingly specialised according to the training of their leaders.  Most of these have been keeping their heads down and hardly going on the Internet.  All of us get on and get on well enough to co-operate on projects like this.  This Flying Rolls book is an indication that they are working together for the betterment of the Golden Dawn Tradition.
There are more details on the book here http://kerubimpress.com/2013/05/announcing-commentaries-on-the-golden-dawn-flying-rolls/ but for a variety of reasons it will be a “must have” on the bookshelves of Golden Dawn Students of all flavours.