Cattan says that if the Judge agrees with the Right Witness the result is good but if it agrees with the left it is bad.  If it cannot agree with either the answer is mean (average) and you have to look elsewhere on the chart for your answer.

So far so good, but you cannot get an answer based on just this information and very often in the examples Cattan gives, the answers are off. Fortuna Major should be indicative of a good ending but often it is not due to the question or the witnesses.

The reason is that a figure can be good or bad depending on the question, the figure’s meaning and nature. The judge might have a good relationship with a figure due to its element, planetary nature.  What Cattan gives, which many modern geomancers don’t is the Grey Judge who gives a verdict of “not proven” or shuttles the case to a higher court.

Figures are defined good or bad depending on the question. Puer, for example, is good for love and war but bad for most other things. Cattan tells us what these questions and results are and these must be considered when trying to understand what the court is saying.

Acquisitio is good for anything requiring gain but bad for something where a loss is required.  It is good for questions relating to the first, second and tenth house.

Fortuna Minor is good, particularly in anything requiring speed or questions involving other people. It is good in second house questions but bad in the eighth house. It is bad when you need to be independent or need time.

Albus is good for questions involving gambling, profit, communications, business and magic and starting or entering new situations. It is also good in the first and fourth houses.

Puella is good for everything, particularly questions involving women. It is especially positive in ninth and fifth house questions.

Puer is good for matters involving love and war, particularly those which involve men. It is bad for all other questions other than those involving the second and first house where he is just average.

Carcer is good for matters requiring delays, commitments and stability, however, it is generally a bad figure. It is particularly bad in questions related to the first, eighth and 12th house. It is good for questions of marriage, or a relationship maintained in seventh house questions but otherwise bad.

Conjunctio is good with good questions and bad with bad questions. It is always good for questions where recovery of things lost is required.  It is good in questions related to the seventh, ninth and tenth house questions and signifies death in the eighth house and a prison stay in the 12th.

Caput Draconis is good for questions involving beginnings but bad when you want something to end. Otherwise, it is good with good questions, bad with bad questions. It is always good in seventh and second house questions where profit and success is required.

Cauda Draconis is bad for questions involving beginnings but good when you want something to end. Otherwise, it is very bad with good questions, very good with bad questions.   It is good in the fourth, sixth, ninth, and 12th house questions, but bad in the second. In ninth house questions, it is good for learning but bad for travelling.

Via takes away all the goodness in good questions. It is good for journeys, moves, and general changes.  It is good in the third, fifth and seventh houses (and often indicates messages).

The following figures can be a Judge: Populus, Via, Carcer, Conjunctio, Fortuna Major, Fortuna Minor, Aquisitio, and Amissio.  So based on the above we can see if the result of the question is going to be good or bad. Fortuna Major would be a good judge if the question is about winning the lottery but indifferent if you were thinking about renting a house. Remember the judge tells you the outcome it does not tell you if your question is going to be yes or no, or good or bad.  That information requires the Judge to “agree” with one of the Witnesses.

This cheat sheet enables you to tell the qualities of each figure and see if they agree with another. This is vital for working out the court and the connections on the chart. It would be best memorised, but I doubt anyone will bother. 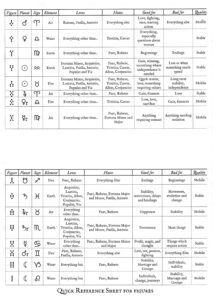 So what happens if the judge says “no” but is a positive figure? It means that the question will not happen, but the querant will be happy with the result.

Does Joe love me?

This is a seventh house love question. Conjuctio, Fortuna Minor, and Amissio are good figures in this question. So, the question is who does the Judge agree with?

Amissio is fire and Mobile. Planetary wise (Venus retrograde) it gets on with both witnesses. However, Fortuna Minor is also fire and mobile, while Conjuctio is just mobile.  This means that the Judge is going to side slightly towards the left witness. If followed this would normally mean “no” but given the question, it is more likely that the Judge will be stalemated, and the ruling is average.   Both witnesses are even so it means that things are stable, my reading is that he probably loves the querent as much as he ever did and nothing has changed.

Should I immigrate to the US?

This is a ninth house question and so all the figures are bad.  The judge is stable and astrologically hates both witnesses (which are mobile). Elementally Rubeus is Fire and Puer is air so it is not going to like any of them. Normally this would be average (because the Judge does not like either) but the Judge is good for doing the opposite of the question so I would be inclined to say “not at the moment,” “wait a bit” or “stay put.”   The fact that both witnesses are uneven means that the situation is in a state of flux, so it is best to wait before deciding.

Will I get more work in January?

Do I have covid?

This is a sixth house question, and it is a house where neither witness or the judge are good or bad. Fortuna minor is a good figure and Amissio is bad. Astrologically, the Judge hates Fortuna Minor and is OK with Amissio. So, the Judge agrees with Amissio which is a bad figure so the answer is no, the querant does not have Covid.