Modern geomancy has two schools of thought about the identification of the Querant in a geomancy reading.

The first method has its problems because it has a particularly narcissistic worldview based on the person doing the reading. It also requires you to throw out the court, the shield, way of point etc. So, like many, I defaulted to the second method even if most of the chart is talking about the person asking the question rather than what they were asking the question about.

I noticed that in his The Geomancie Christopher Cattan follows a much simpler method which enables him to use the entire Geomancy chart.

Basically, if someone was asking a question about the Pope or the King, he puts that person in the first house and assumes the entire reading is about them… effectively removing the person doing the reading or the questioner completely.

This enables the geomancier to use all the tools of the chart, including the shield, way of point, part of fortune and part of instruction.

Rotation can still be used to look at questions like will “my wife’s mother die this year?” The wife would be in the first house, you would look at the eighth house of death, the mother would be in the tenth and her death would be in the sixth house (which is the mother’s eight). While this is complex, it is not as complex as doing a triple rotation. 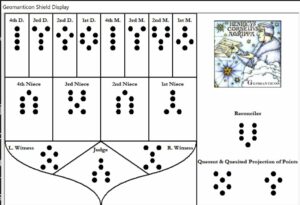 The Prime Minister is in the first house and the covid restrictions will be the 12th or the 10th house. I am assuming the 12th (although it turns out to be largely irrelevant)

Amissio is good for questions requiring a loss, Conjuctio though is good for keeping restrictions and the Fortuna Minor Judge is in favour of reducing restrictions. This means that the judge is pointing to Amissio which is evil for the question and the querent. Normally, this would be a bad thing to get an evil reading, but since we don’t really care about the Prime Minister we get a slightly different answer. The Prime Minister will be forced to reduce Covid restrictions quickly, he will not be happy about it because he wants to keep them in place. (In fact, adding the querant and quested suggests he wants more restrictions). The sentence is Tristitisa which suggests he will be miserable

The way of points is up the left side of the shield chart pointing to Via which is change.

The Prime Minister is Puer. This is normally a bad figure, but since he is in the first it is just average. He is facing some conflict over increased controls. He does not go anywhere in the chart and while he might be fighting, he will not win

The quested in the 12th house is Laetitia which is a positive sign and suggests expansion and liberalisation. However, it is bad for 12th house questions. If the court had been good then it would suggest the Prime Minister would have been able to get more restrictions, but in this case it suggests liberalisation. It is also in companionship with Cauda which means an ending.

Laetitia moves to the Prime Minister’s tenth house which means that people favour this liberalisation. It squares the Prime Minister… Cattan does not believe squaring is bad unless it involves bad figures. In this case, the Prime Minister is a mildly bad figure so he will find himself going against the government or the Italian people if he tries to bring in more restrictions.