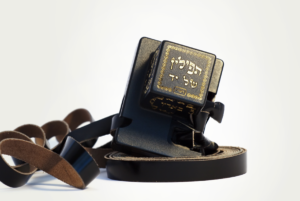 Most people would associate phylacteries with the Jewish tefillin which is a set of small black leather boxes containing scrolls of parchment inscribed with verses from the Torah during weekday morning prayers (left). As Hebrews considered the words God spoke to be holy, they were worn in these boxes effectively binding the worshipper to them.

Gentiles called the tefillin “phylacteries” which was the Greek φυλακτήριον phylaktērion, meaning “guarded post, safeguard, security”, and in later Greek, “amulet” or “charm.” Magical properties of the Teffilim are limited to religious concepts. They are supposed to protect the user from improper thoughts during worship. Cynics have said that they are a replacement for pagan phylacteries and some of the early Rabbinic sources claim they could be used for defeating demons (Numbers Rabbah 12:3) lengthen life and other amuletic qualities.

Phylacteries also appear in PGM. PGM 579 includes one which was to be used against daemons, ghosts and general sickness and suffering. This example has the magical text written on the outside of a lion-headed serpent eating its tail with more magical lettering on the inside including the name of the person the spell was supposed to be for.

So what is the difference between a talisman and a phylactery?

Phylacteries were a special breed of protective talisman which are now called amulets. Their power was enhanced by the magical power of letters to carry out a physical magical effect. These letters, often with a drawing, were put on paper, or thin sheets of metal which were then tightly folded up and placed in a tube or case. They were carried around by a person for general protection. The fact that they were tightly wrapped up was important because the letters were not supposed to be seen or they would lose their power. This idea is common when using narrative charms as there was a power in the names of power not being read. While you would know a person was wearing a phylactery, you would have no idea what it was for. 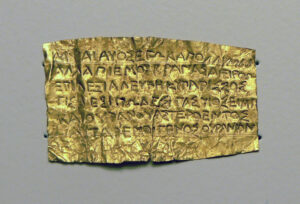 Examples of phylacteries which can be found in the Museum of the Written Word in Rome were mostly tightly wrapped (there is an unwrapped one in the header of this story), while curse tablets (katadesmoi) often were not. Other examples the golden tablets of the Orphics which were tightly wrapped up, put in tiny boxes and placed on the dead person. Academics think that they provided instructions to the dead when they arrived in Hades, but what is more likely is that their magical properties tied them to an underworld reality which they would automatically be able to navigate thanks to the phylactery. Something similar can be found with the spells of the Egyptian Book of the Dead. Other “orphic tablets” found like normal phylacteries and protect the dead person from fear in their post mortem state. 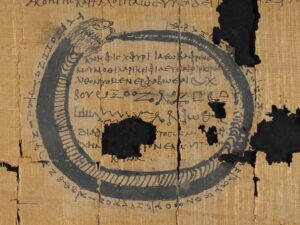 PGM 579 provides an example of a phylactery which was designed to provide “a bodyguard “against daemons, ghosts, sickness, and suffering. It was supposed to be put on papyrus, tin, gold or silver leaf. It worked because the seal and power of the Great God protected the person whose name was in the centre of the magic circle. The seal comprises of the lion headed snake of time Chnoubis who was connected to Abraxas and Agathos Daimon. His solar nature relates to healing. Since this is a phylactery, the names and the spell are especially important so if any are missing the phylactery is damaged. The formula to be written around the outside of the serpent contained many lacunae which have been lost.

In the middle is the name Kmephis Chphris. Chprhis was the name of the Egyptian scarab god Kephri. While this has led many to believe that this phylactery was connected to an aspect Kephri it is incorrect. Scarabs were connected to the solar god Chnoubis and sometimes appear on his talismans.

There then follow magical names which empower the talisman further. IAEO IAO AEE IAO OO AION IAEOBAPHRENE MOUNTHILARIKRIPHIAE Y EAIPHIRKIRALITHANYOMENERPHABOEAI… there then follow seven magic symbols which are presumably planetary and the intention is written below Protect my body and the entire soul of NN.
Then the phylactery is supposed to be consecrated and worn.

What is significant about this phylactery is that the ensouling ritual is not provided. It is important to note that PGM 579 does not say that the phylactery must be folded or rolled up either. This might be because that would be stating the obvious.

The missing link between a phylactery and a protective talisman (amulet) is how they are supposed to be charged. Any magician would tell you that on their own, letters are not enough to link you to a protective spirit (PGM 579 calls this spirits a bodyguard). While it might be enough that a person has faith in the divine aspects of the words, faith is not something typically associated with a magician. But what we see with phylactery formulas is that we are given the “body” of a talisman which is then linked to a spirit through an unknown ritual.

This differs from a talisman (which does not have to be protective or carried around) primarily because its use is secret, and power is maintained by the repeated folding of the divine names and seals. This method (along with ensouling) might create a specialised protection talisman where a physical effect is needed. More experimentation and research are needed on this.