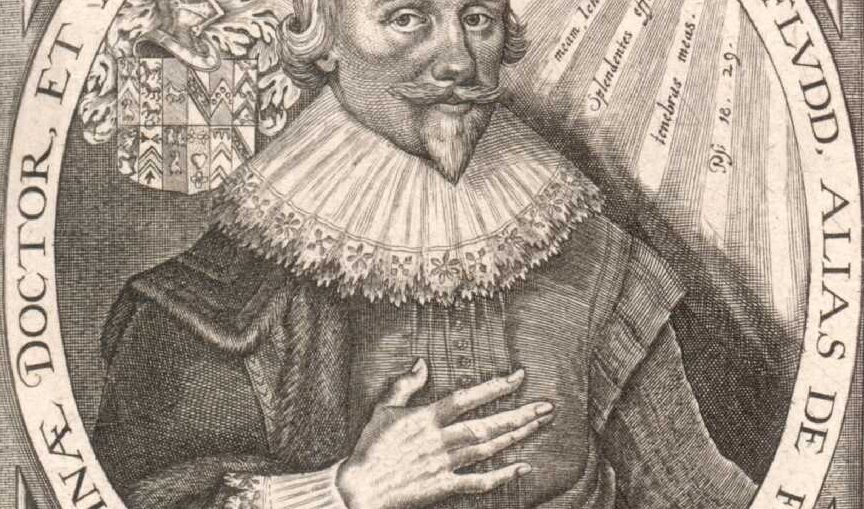 Robert Fludd was an important 16th Century Rosicrucian and magician. This article shows his theory of geomancy divination which was based on a neo-platonic idea of Plato’s Chariot, which I mentioned in my book Helios Unbound.

Robert Fludd considered divination was communication between part of a human soul which was responsible for conscious thought and its unconscious High Genius. The language of this communication was imagination – the chariot drawn by the senses.  Generally, the Intellect or the imagination does not know what the Higher Self wants (although it could guess), if the Intellect does make contact, it may find out the divine truths which not only apply to it but also to others.

In divination, and Fludd mostly focused on Geomancy, the Higher Genius exerts its divine virtue as it does during prophecy (which was considered superior). While in prophecy is united to the Higher Self’s more divine aspects, divination provides a process that its more human characteristics can infuse the geomantic process with a prophetical power whose effect can be apprehended by the senses.

Fludd felt that Geomancy was very occult and inward; it is difficult to account for it rationally. It suffered from a “vulgar understanding” to which was “foolish, inane, absurd, and ridiculous.”  He said that real practitioners of the art found Geomancy to be a science through which things future, present, and past may be revealed, provided the Geomancer’s judgement was not obscured by the obnoxious influences of the body or the deceitful actions of the senses.

“Geomancy is not accessible to all. Fools would never be able to penetrate to that centre of the action, that unity and point of the [Higher Genius] whose attainment is desirable]. For that point lies beyond the degree of Intellect, and only those may reach it who manage to leave the habitation of their bodies.”

Fludd focuses on the Higher Genius’ involvement creating sixteen lines of dots at the Geomantic operation’s start. He says that they are not caused by an “adventitious movement of the hand, as the ignorant would say; but in the number and proportion of the dots of those sixteen lines a prophetic message of the soul lies concealed.”

In other words, the Higher Genius indirectly moves the geomancer’s hand (or influences the dice they roll).

The dots establish magical correspondences with the twelve signs of the zodiac, the seven planets, and the four elements, they convey the message of the soul by the macrocosmic vehicles of ether and the four elements. Without the aid of those macrocosmic vehicles, the Higher Genius or the Intellect can descend into humanity.  The geomantic dots proceed from the human soul, man’s very essence.

All movement creating the dots must be unhindered by “accidents of the flesh and the senses.” This is harder than it sounds as what Fludd calls the “impurity of the flesh and the darkness of error” impedes the rays of imaginative communication between the Higher and the Lower.

Imagination may indeed be so affected by the world of matter that it will lie like a thick cloud over the senses, not allowing them to receive the sun-like rays of [Higher Genius].

Fludds’ solution is to prepare the body for all divination by abstinence that will bring it under control and will make the dissipated central rays of the soul contract towards their centre. This is a standard Christian idea of the world which saw it as the domain of Satan. While this is less useful, Fludd is implying something more critical about the Geomancer’s state of mind before divination. He says that the person must be reduced to the simplicity of nature and Geomancer must avoid hate or anything which distracts from unity.

“The geomancer should be in good health, his mind unperturbed, his stomach not overburdened with food and wine; he should not be oppressed by poverty, nor under the influence of lust or wrath.”

Fludd suggests quiet religious contemplation is conducive to the proper state of mind because he considered this to be a moderate and temperate way of life, following nature.

He poetically suggests that the Geomancer should abstain from sex but instead look for spiritual copulation. Instead of wine, the illuminating fluid of Higher Genius should inebriate him. He should prosper not in worldly riches, “he should be replete with spiritual food, not with crapulence [which is a word which needs to be restored to common English use] .”

It would be best if you did not have a mindset which clouds the Higher Genius sending its messages. The mind should be as transparent as possible and what is now called the “monkey mind” stilled. This confirms some of my experience. When I have been troubled about the question I am asking, the reading has likewise been confused.

“The dots, while being made, must not be counted. If you count them, the result of the operation will be useless. This science has its foundations in the soul, and the number of the dots must depend on the will of the soul, and not on the appetite of your senses. He who approaches this work should not begin with anything unless his heart is well disposed, his conscience clear and sound, his spirit not vexed by any troubles; so much so that he does not wish anything worse to any other man than to himself. Immediately after sedulously performing these acts, he may proceed to the projection and disposition of the dots.”

He implies that Geomancy must be performed in a kind of rapture or ecstasy similar to prophesy.  This makes Higher Genius gather its powers into the narrow and limited human body, “so that the divining soul may by their light see a simple truth more brightly.”

When the dots are drawn, they become vessels for the planetary, elemental and zodiacal forces they represent and they would help communicate the message of the Higher Genius to the Intellect. For this reason, it was essential to keep the mind clear as the symbols themselves will start to speak to the Geomancer.

Generally, Fludd’s Geomancy is a form of communication between the Higher and Lower Self. The lower self is made passive by doing the reading in an ecstatic state by which they attempt to contact their Higher Genius.  The Higher Genius responds by influencing the number of dots made during the reading. This creates a symbolic alphabet by which the spirits behind the planets are drawn into a piece of paper and provide suggestions to the Geomancer. These suggestions form an imaginative dialogue between the Geomancer and the Higher Genius.

Practically, it rules out a considerable amount of absolute meanings for Geomantic symbols. It follows a more eclectic and mystical approach to divination.  While some geomancers might like their readings to be literal and clearly defined, that is nearly the opposite of Fludd’s meaning.  Rubus might be pure evil or pure love depending on its surrounding influences and the impulse of the Higher Genius.