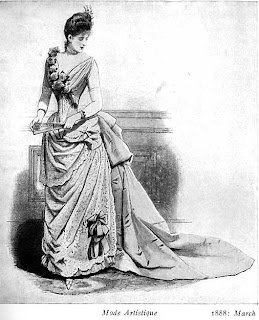 Doing all the preliminary work for setting up new temple I have been giving some thought to thinks like cloaks and tabards for the officers. For the last decade, like many groups, we have used tabards in leiu of cloaks. These are cooler than cloaks and less likely to make a mess when you walk around. I consulted the ritual however and it specifically talks about the middle pillar officers wearing robes… black, white and red. The advanced documents show drawings of cloaks.
Robes would be better than tabards or cloaks so why were these used?
The problem with modern perceptions of the GD is the belief that they operated much like we do. People wore robes and then a cloak over the top. However it occurred to me that Victorian women would not be allowed to strip down to just a robe and wear it in front of men even with a cloak over the top. This would like wearing your underwear in a ritual and throwing a cloak over the top. To the victorian middle classes a woman in her underwear was naked!
But you could not wear a robe over a victorian dress (see the picture)
What if instead of wearing robes the GD wore their every day clothes with a cloak over the top? This would be very masonic and in keeping with the tradition and the times.
The weak point in my argument is the question about what the non officers wore. The ritual refers to a black ‘gown’. The meaning of word gown during this period was two different things. There was a the idea of what we would call ‘a dress’ and there was also the concept of what the Victorian judges would have worn — a black shapeless over garment (which could have evolved into the Tau robe but certainly would have looked a lot different.)
Frankly I would not want modern street clothes in a ritual and would favour robes as a modern evolution.
If modern groups were to obey the ritual literally then officers would just wear an appropriately coloured robe with a cross sewn on the breast. These days we dont have a problem with robes so we should abandon the cloaks and tabards completely.