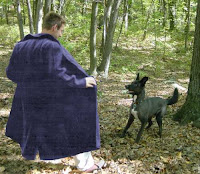 As part of my work on  building the Vault on the computer I have looked at a large number of posts online about the how the GD did it.

One of the things that strikes me as odd is how some of the various vault artists have said that they have tried to get squares to flash.
The central document for the creation of the Vault was “The Book of the Tomb” which was written by Westcott. It talks about two methods of creating a vault which are diametrically opposed. According to Westcott you have a base wall of set colours and on each of them you mix the colour of the planet.
The base wall is made up of flashing colours and so are the colours of the planetary walls. This method is called juxtaposition. It is the hardest to do because it requires you to mix colours exactly otherwise things go brown or black. Having made the walls on the computer I have found that the sweet spot for this mix is 20 percent the colour of the activating wall.
Here is the Mercury wall which is made using the back wall and a yellow activating backwall (at 20 percent) and a purple sigil colour. 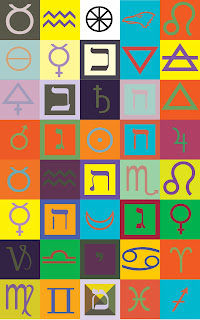 The first thing you will notice is that the only colours that flash are those of Mercury which were already Yellow and Purple. If you think about it, it is completely logical. If you mix two colours together you will lose the ability for anything to flash. The magic then is not in the colours but the mixing of them. This art of mixing colours was and still is one of the lesser known aspects of alchemy. If you want to know more you should read the Alchemy of Paint by Spike Bucklow.
There is a lot that meditation on how the different walls change the base colour can reveal
However the Book of the Tomb suggests a cheats way. This was the method that was used by the Amon Ra temple in Edinburgh. This involves mixing the backwall as before and then painting the sigil of the backwall relative to the new colour.
With the same mercury wall you end up with something like this: 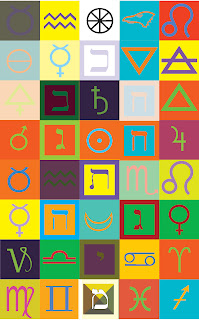 The logic here is based on a much familiar GD premise. That is that the flashing colour will activate the colour on the panel and bring its energy into the temple. Westcott said that this idea was acceptable however it is my contention that he missed the boat on this one (perhaps Amon Ra made it wrong, showed it to him and he didn’t have the heart to correct them).
My first teacher was initiated into a SM offshoot in the 1970s and he moaned that the vault (which was done the Amon Ra way) made you feel sick after a few minutes and you could not look at the walls after a while. He would have had a point, not only are all the sigils shouting at you they are also broadcasting all their energy at a higher pitch than the traditional wall.
However they are also missing the subtly of the first wall. As you saw some parts of the wall flash… these are the pure aspects of it. This sends the magical message that those energies of the wall are still there. However the mixing shows us how these energies work to effect the various parts of the Kabbalah, the other planets etc. Say for example we were travelling in Yesod. The purples suddenly give way to a more yellow purple we know that we are exploring the territory more intellectually. Likewise if we find something needs to be managed in a chosen sphere we can transform the colours of that environment to tune them to what we want.
I am deliberately scratching the surface of what the vault colours can do, but it is just to give you an idea.
To make matters more interesting there have been other GD vaults. The Whare Ra vault for example has some completely different squares to the book of the Tomb. This involves changing some of the base squares. For example the Water Kerub is flipped so that instead of being blue with a flashing orange background it becomes Orange with a flashing blue background.
All these give the vault a different energy and the answers to different questions. However they are much deeper questions which are not solved by having an entirely flashing vault.
Please note that I aware of the blind (or typo) in these vault drawings.  You do not get any points for telling anyone what it is.
Share on Facebook Share
Share on TwitterTweet
Share on Pinterest Share
Share on LinkedIn Share
Share on Digg Share