Skip to content
In my book King over the Water I describe the end of the AO Lineage. I thought the source of the information obvious as it had been publically available for many years.  Apparently not….
The only real records we have for this period are from the pens of Dion Fortune and Ithell Colquhoun.
Fortune was sent by her mentor Maya Trenshall-Hayes from the London temple run by John Brodie-Innes to join Mina’s temple.  Things did not go well and Fortune was removed before she reached the Second Order.  She did not provide much in the way of details.
To that we have to turn to Ithell Colquhoun who was the cousin of one of the last chiefs Edward John Garston.   According to Sword of Wisdom Page 19 she was introduced to a Mrs Weir and her daughter who were the chiefs of the Order along with her Cousin (Mina had died by then).
On Page 5 Ithell Colquhoun’s introduction to Edward John Garston’s Rosi Crucian Secrets she identified Weir as Mrs Margaret Boyd who had helped Mina Mathers establish the AO Lodge of the Golden Dawn when the latter moved from Paris.   The address 26 Elm Park Road in Chelsea was also where the London AO temple met.
This helps us identify the people in her Sword of Wisdombook. Garston had wanted to marry Boyd’s daughter Isme who was another chief, however she was interested in a stockbroker.  The Order at this point seemed to be members of Boyd’s extended family with Isme, and her cousin.
Colquhoun was famously turned down by Boyd for membership of the AO after being astrally examined, she later wrote that she should have applied again but did not know that you were automatically rejected on your first application.
She spoke to Garstin again in 1939 and he told her (p27 of Sword of Wisdom) that the temple had dispersed and the Secret Chiefs had ordered that everything was to be destroyed.
Later in the book (Page 46) she gives more details. 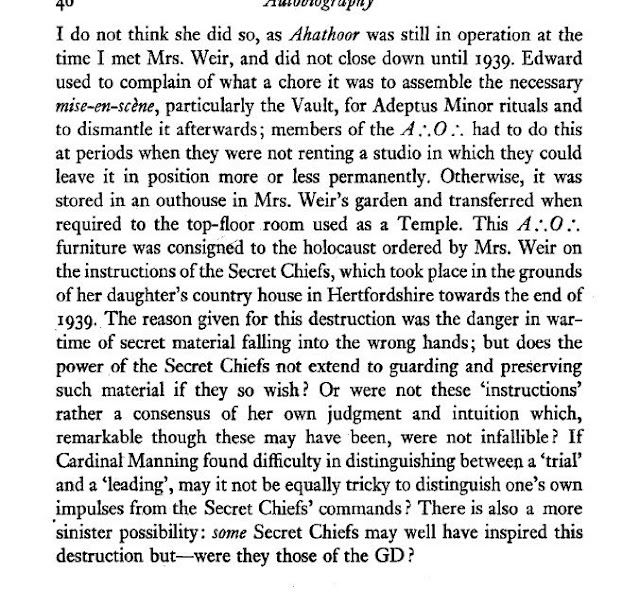 Colquhoun has proved reliable when she is describing events that she knows about or has experienced.  She is completely unreliable when she starts to speculate.  It is then she goes off talking rubbish about Druid vaults and Samual Mathers giving lineages to people he did not know.
However  was probably not the complete end of the AO. This is because John Brodie-Innes continued to run a slightly schismatic branch of the Order and when he died he appointed Carnegie Dickson to carry it on.  It was not a big force on the occult scene after the war and in the end took what was left of the AO lineage back into Stella Matutina. When he died his wife took over.
Hermes only had less than 12 people by 1956 and one of the chiefs Charles Renn, had to take his 7=4 in New Zealand under Whare Ra.  When they appeared in NZ they were so impressed Whare Ra building, and with the relatively strong Order in New Zealand, they decided to emigrate permanently and joined that Order. Mrs Carnegie Dickson died in 1968 and any connections had long since passed to New Zealand.
Thus it would appear that any claims at legitimately reviving the AO lineage hits the same problem that those who claim official links from the Stella Matutina.  It is impossible to claim descent from Mather’s London temple because that had closed, Mina’s temple, though legitimate, was formally closed by by its secret chiefs (so that is a dead end too).  To claim Whare Ra lineage you have to have been given the link by someone entitled to do so. There are a few people who have that standing.  But the AO link would only be possible if it was given to you by Charles Renn.  The only AO link from Renn I know of is claimed by Tony Fuller.
But the Renn lineage is equally problematic. To accept it you have to accept that Mina Mathers was not the rightful spiritual heir to her husband’s order and that honour legitimately fell to John Brodie-Innes.  Not only that, you have to believe that Carnegie Dickson had the right to disobey the secret chiefs instructing the AO and carry on, even after Mrs Boyd told them to close.
In my view this lineage is a little tenuous, even if is at least considerably stronger than others that have been claimed.  It might be that the reason Hermes had such difficulty with those higher grades was that the spiritual force behind the AO had really gone up in the bonfire of Isme garden, just as the Secret Chiefs had requested.
Share on Facebook Share
Share on TwitterTweet
Share on Pinterest Share
Share on LinkedIn Share
Share on Digg Share