Community: A social, religious, occupational, or other group sharing common characteristics or interests andperceived or perceiving itself as distinct in some respect from the larger society within which it exists(usually preceded by the): the business community; the community of scholars. 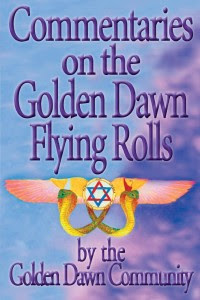 The Communtaries  on the Golden Dawn Flying Rolls (which can be bought here)  book was written by the “Golden Dawn Community.”  This leads to the question what is the Golden Dawn Community and who are its members?   Now before we get to specifics I should put up my hand and say it was me that project managed the book, contacted all the people who ended up writing it and laid it out so if groups or individuals are missing it is my fault.
A large number of different Golden Dawn individuals and organisations were asked to take part.  The aim of the project was to be inclusive. But there were points where we had to define what made a member of the Golden Dawn community.
Firstly a writer had to be a member of a Golden Dawn group either now or in the past and actively working the Golden Dawn system.  This sounds obvious, but there are many different and interesting individuals which had their roots within the Golden Dawn but have since gone in different directions.  This group which they were a member did not need to have anything like lineage, charters or do anything more than to be working the Golden Dawn system.
Specifically these groups had to work the Golden Dawn rituals and structure.  This could be done in a modified or edited form.  However it ruled out groups, for example, which had abandoned the elemental grades.  There are some good groups out there which have abandoned the Golden Dawn rituals completely and while the work they are doing is worthwhile, they cannot be said to be part of the Golden Dawn eggregore.
They could not be running the Golden Dawn as a business or a money making enterprise.  When the Golden Dawn was formed it was as a magic order and not designed to make money.  Since the publication of Israel Regardie’s book there have been a number of groups which have been started up as businesses, usually to make money for one person.  In any event, inclusion in this book, would constitute free advertising for such a business.
Each group needed some connections with others, which is what the central idea of community actually is.  While I admire any Golden Dawn group that works in such secrecy that none of us have ever heard of, but we can’t really count you if we don’t know you exist.  In fact it was my private hope that some of these groups might get in touch for future projects.

Lastly you can’t be a member of a community if you are spending all your time attacking different members of it.  While there are a few people within in the GD community who do not like each other, or “have history” with each other,  the remarkable nature of this project is that they all worked together to bring the project about.  It was that willingness to work together which was crucial to the success of this project.
But it is unreasonable to expect any community to work alongside any individual who dedicates their time attacking them and their orders.  Such types, though rare, reframe themselves out of the Golden Dawn community and if there is going to be any general unity within the Golden Dawn it has to be with such types away from the rest.
As it can be seen, what makes a member of the Golden Dawn community was extremely wide, and inclusive.  As a result the book has managed to generate some interesting information as different groups explain their particular spin on the Golden Dawn current.
This is particularly clear when two or three people take the same flying roll and approach it with the things that they find interesting.   Normally you would have to belong to several different orders at the same time to get this level of experience.
It is when the Golden Dawn which talks as a community that you can start to see how detailed and packed full of variety that system really is.  Also how issues like Godforms, lineage, history, and egos are just a tiny part of the overall Golden Dawn mindset.
While I would like to have seen more people contribute to a project like this, there were some in the Golden Dawn community who were unable to do so.    Some of this was because it was the first of its kind and had not been attempted before.  It takes some bravery to be the first to stick your head above the parapet.  Others were just too busy with their groups, or life,  to take part.  It is my hope that the next Golden Dawn Community project which takes place will reveal more groups who are working together to further the development of the Golden Dawn tradition.  Anyway if you are interested in taking part, drop me a line.