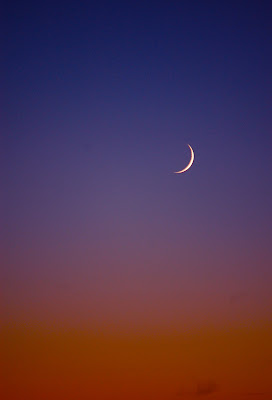 I have been reviewing all my tarot material lately as I gather information on a book I have been meaning to write for a while.  What is interesting from a Golden Dawn perspective is how Samuel Mathers appears to have started well with the Tarot, but then clung on to some things within tarot to maintain a tradition he was undermining.
Take for example the Moon card. The traditional interpretation of the moon card is bad.  It represents illusion and suggests that the querant is being fooled by themselves or others.   This is the negative aspect of the Moon.
However Mathers made it clear that the Moon as seen by the Golden Dawn was on the side of Mercy and therefore its symbolism should be seen in a positive way.  The Golden Dawn attributed the card to the letter Qoph and Pisces.
The image of the letter Qoph is the back of the head which is the most primitive part of the brain.  It is that of the automatic consciousness and carries out functions which we do not think about.  The symbol is sometimes seen as an axe.  While you might think that an axe is simply a primitive weapon, in ancient Egypt it was a symbol for a God’s power.  This reveals to us that magic works at the unconscious level and any miracles on the material plane happen by manipulating the subconscious.  The shape also looks like an ear, which means that we are dealing with psychic “hearing.”
When Qoph appears in a reading it is indicative of something powerful which is going on behind the scenes.  It might indicate that what is happening is unconscious.  Something new is coming and something powerful.  The Moon is the sun reflected and it is also the Sun at midnight.
One of the more unusual meanings of Qoph is a monkey.  This is a reference to what Buddha called the Monkey Mind.  It is that clever, but automatic consciousness, which drives us from one thing to another.  Buddha said that the human mind is as if filled with drunken monkeys, jumping around, screeching, and chattering, which need to be quietened before real meditation takes place.  This is the automatic conscious at its worst and it acts as a destraction.  In some readings Qoph can represent distractions and too much going on. 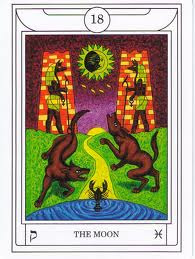 Qoph has the number 100, which is the same number as the Archangel Michael who was “like unto God”.  The fact that there is a 100, and Cabbalah says that there are ten spheres in each sphere of the Tree of Life, gives us the impression that Qoph is a totality, a perfect mirror image of the Universe.
The world is written Qoph [Back of Head, 100] plus Vav [Nail, 5] plus Peh final [Mouth, 800], all of this equals 905, which reduces to 14 (Temperance) and again to Vav.  905 is the same number as the word Resheth which means net.  Qoph then links all creation and forms a connection between all beings.  It gives a method for the unconscious forces to communicate (Peh).  The letter is important because it is first letter in the word Qesheth, which means rainbow.  This was the rainbow which God revealed to Noah after the flood, promising that there would be no more wiping out of humanity by floods.  Notice that a rainbow is prominent in the Temperance tarot key.  So when Qoph shows up in a reading, we are being told about communications, links and networks.  It is also indicative of promise that things will get better.
The Sepher Yetizirah says that God produced Qoph and made it “predominant in Joy, crowned, combined, and formed Pisces in the world, Adar in the year, and the spleen in man”.  Joy, is an unconscious reaction to a situation.  Joy takes away the power of restriction expressed by Ayin and makes a mockery of the illusion that is material reality.   Adar is the twelfth month of the Jewish calendar and it is seen as a  month of good fortune for the Jewish people.  Purim, the holiday of Adar, commemorates the “metamorphosis” of the Jews’ apparent bad fortune to good.  The festival of Purim marks the high point in the joy of the entire year.  Cabbalists say that Purim is a time of great wonder, which symbolises the infinite essence of God’s transcendent light entering into the finite context of physical reality and revealing itself.  Thus Qoph can indicate that things are about to change for the better and if joy is not already there, it soon will be.
So lets look at the astrological connection. Pisces rules secrets and is in turn ruled by Jupiter.  This emphasises the idea of something secret going on behind the scenes.  Jupiter is the sign of expansion and success and so it underlines the idea that things are getting better.   But this will not be so hot in the area of relationships and creativity.  Venus falls in Pisces, which means that love and creativity cards are weakened by the presence of Qoph in a reading.  Communications and magical operations will fail, as Mercury is in detriment in Pisces.
On the path of involution, which is questions of a material nature, Qoph is Venus acting on the Earth through Pisces.  As we have seen above, that is not a good thing.  Divine Love is weakened through the sphere of Pisces which explains a lot of why the world is in the mess it is in.  Divine Love instead manifests as material growth and evolution.  On the path of evolution it is the material nature working on divine love through Pisces.  Again, this is difficult in a spiritual sense, as the Earth cannot really understand the Venus side of God.  Instead it attempts to create more forms which is the earthly inclination.  For this reason Qopth sometimes relates to pregnancy, new theories and ideas, which are built on existing developments rather than true breakthroughs.
So if the Moon is looked at in a general reading,  it is the unconscious mind which links all things together, but with an  emphasis that something is always on things going on behind the scenes.  Nothing will be immediately obvious, but seems to be moving for the best.
It could be a period of great happiness, with everything slowly moving towards a perfection.  If things have been bad, Qoth indicates that there is a turning point about to happen which will change things.  The answer to questions that you seek might be found by networking and asking others.
It is a good letter for business because it shows that a plan will go forward and develop and expand.  But it could show up in a relationship reading for someone who has been concentrating too much on their work at the expense of their relationship.
In a relationship reading, the question “does he love me?” is probably not answered.  It suggests unconscious forces at play, but these usually work to block a successful relationship.  If it is a question about an established relationship, it could mean that while everything is under stress, everything is evolving and in time the true nature of the relationship will reveal itself, usually positively.  In a spiritual reading, the message is to quiet your monkey mind, relax and accept that you are moving towards your goal.
So this creates a totally different Moon card from that of tradition.   So the question is, “why did Mathers go for the traditional meaning of the card when he wrote it in Book T?”
Instead of using his own suggested attributions, Mathers said “Dissatisfaction, voluntary change. Error, lying, falsity, and deception.”  This is certainly not the mercy side of the lunar forces, nor has it anything really to do with Qoph or Pisces.

Based on this meaning Crowley would be justified in his particularly vile meaning of the Moon card in his Book of Thoth which he admits is for the waning moon. “… the moon of witchcraft and abominable deeds. She is the poisoned darkness which is the condition of the rebirth of light.“
While I would suspect that Crowley might be projecting his attitude to women in this meaning, both he and Mathers would be wrong.
While I am finding myself agree less with Paul Foster-Case’s meanings of Tarot, I think he hit this one on the head quite well.
The Card is one of unconscious evolution.  The moon is the light in darkness it is the reason why we develop.   When we encounter it in regards to a problem it means that we are developing, slowly and surely towards something better.