Skip to content
Lately I have been doing a lot of work on the Golden Dawn version of the angels of the Shemhamphorash. For those who came in late, the Angels of the Shemamphorash are based on a cabbalistic system connected to the 72 letter name of God. The Golden Dawn did some serious surgery to the system by orientating them to Leo rather than the more traditional Aquarius and assigning each of the two angels a Tarot card connected to their decan. 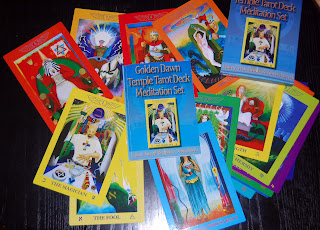 While I will probably report back later on my experiments, one thing that all this has taught me is that there are no good or bad cards in tarot.
The Golden Dawn attributed some pretty nasty titles to some of the cards. Perhaps the worst was the Lord of Ruin connected to the Ten of Swords, which often leads to a reading sliding down the pathway to Doom. You can have a reading with lots of good cards and then suddenly the ten of swords pops up and you start seeing the riders of the apocalypse.
But equally you can have readings with lots of good cards when evidence suggests otherwise. For example a person whose life has collapsed has cards which say everything should be coming up roses right now.
The Golden Dawn said that each of the minor keys (without the aces) were under the control of the zodiacal trumps. Most of these are seen by readers as being more powerful and get a more optimistic reading than the minors.
The list is

Focusing on the doom card of the ten of Swords we see that it is controlled by Gemini which is probably the lightest major arcana. True the GD did try to give a more pessimistic image of it (Andromeda rescued by Persius) but that is still no justification for the pile of doom which the eight, nine and ten of swords are attributed. True Air is not exactly “happy” in the stodgy element of Earth 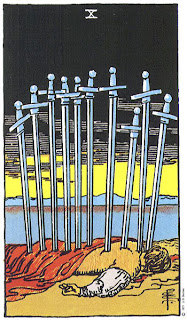 The Angels of the Shemamphorash who look after the ten of swords are Damabiah and Manaqael.
Damabiah takes the energy expressed by the Lovers card and converts it to the 10 of swords and Manaqael releases it so that it can move into the next decan (in this case the “extremely positive” two of cups).
So what then is this energy expressed by the Lovers’ card. The lovers appears in tarot it is always sorting out wheat from chaff, dividing things apart. This makes the Tarot attribution “the Lovers” all the more stranger as you would think that Love is a unification. But this is one of the Mysteries of the Tarot. You are separating things knowing that they are One thing. You are saying this is man and this is woman, but they are separate aspects of One Thing. This is real love or true marriage. The couple are both separate but at the same time working together. The only time they express true union is during the sexual act, but the rest of their lives are working together at something they call their relationship, or their marriage.
So based on these combined meanings, the ten of swords should be read as an ending or separation which which leads to a new beginning or union (emphasized by the two of cups in the next decan). In a relationship reading this meaning would be more obvious but in a business reading, it would mean that a project will end and the result will be good. 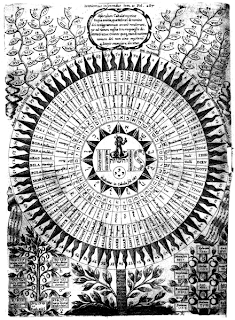 This is far from the Lord of Ruin of the Golden Dawn. In fact I have said before that this card is better to be called the Lord of Endings and Beginnings. The connection between the Lovers (zain) suggests that there has to be a separation before there can be a union.
So what about so called positive cards. The sort of cards people like to see are the two of Cups which suggests partnership and union. Is it possible then to see a negative aspect to the Lord of Love, which is the Golden Dawn title of this card?
The cards are ruled by the Chariot and the Hebrew letter Cheth. While the Chariot is generally optimistic card, Cheth rules over the Hebrew month of Tammuz which was seen as a “month of tragedies.” Tammuz was a Babylonian god and the Babylonians enslaved the Hebrews. It is connected to the sin of worshipping the Golden Calf and begins is the three week period which commemorates the destruction of the Temple in Jerusalem. Cheth is seen as a force which brings things together which might not normally be joined (it even looks like a vav and a Zain linked together). Since the two of cups shows a bringing together of things it does not necessarily mean that this is a good thing. A sword and a nail are opposites. One joins and the other splits apart. Cancer is the co-dependant sign of the zodiac and tends to want to hold relationships and families together no matter how destructive they are.
With the Two of Cups follows in sequence from the ending of the ten of swords. Our first Shemhamphorash angel is Eiael and as we have seen he has elements of the ten of swords the second angel is Chabuiah who has elements of the three of cups. Inside these two elements can be found the negative aspects of the cards. Eiael suggests a possibility that two things have been bought together, but it could contain the seeds of an ending, it has has been bought together too soon, or is two things that should not be together. The energy of Chariot (opposites bought together) could contain the seeds of destruction. Chabuiah suggests that it could move into a more friendly aspect over time or established partnership (three of cups).
So looking at this in a reading we can have a negative from a positive card.
Say a querant wants to know if their relationship will last. The card representing the relationship is the two of cups. Traditionally you could say that this is one of the great loves which should be able to overcome everything. But when you look at other cards you see negative ones which indicate there could be arguments and quarrels. Indications that there are two sides at odds with each other. The near future is the ten of swords but the long term future is the two of swords. This would indicate that the relationship is probably one of two people who have different world views and are not getting along. The ten of swords may not mean that the relationship is doomed (although it could) because it is followed by the two of swords. This would suggest that the couple work out away to resolve their differences and the problems end at least in the short term.