The Egyptian Papri provide us with very important authentic magical techniques.  The only difficulty is that they are hard to approach from a modern mindset. 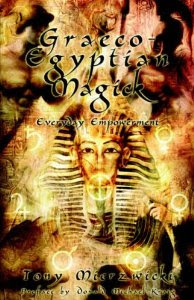 The biggest issue, besides having to drown some unfortunate street cat, or endangered species, are the names of power which are a mixture of Coptic, Middle Ancient Egyptian, Greek, and Hebrew.  Most of them are pronounced using a form of classical Greek.
Graeco-Egyptian Magic – Everyday Empowerment  by Tony Mierzwicki provides a way into this really interesting system of magic.  Mierzwicki calls the book “intermediate level” and while I would hesitate to call it a book for beginners it has a few things which rule it out for advanced use.
The bulk of the book is taken up with invoking the seven Aions or the seven planets.  Mierzwicki gives an interesting opening and closing and then a series of rituals to make a contact with those Gods.
This is an excellent idea and I decided to follow it as an experiment.  Mierzwicki provides you with the tools you need to pronounce the barbarous names of power but you have to really work it out for yourself.  In the ritual he will give you the word OUKRA and give you the pronunciation in the back (OOK-RA) with the R slightly trilled.  It would have been more useful to have the pronunciations in the actual rituals he gives.  But hell, an author should not have to do all the work.
The opening rituals is not bad but will take some getting used to if you are from a Wiccan, or even Golden Dawn tradition.  It works by invoking the unknown Aeon of Aion into your circle.  This is extended by using the Greek Vowels to open the six directions of space.  The Aeon of Aion energy is then divided into two by vibrating two different “male and female” names of power.
There then comes a very long “blasting open the portals” by using the vowel sounds.  Four weeks into my experiment I gave up on this and replaced it with supreme pentagrams.  I could not make the vowels do much other than give me a sore throat. Mierzwicki ’s logic I really liked.  These were the names given to the Aeon of Aions at the quarters.
There then followed some interesting adaptions from the Egyptian Papyri to complete the opening.   What I found was that the Aeon of Aeon tended to be Thoth energy… in other words Thoth in his guise of the head of the Ogdoas and the creator of all.   That worked for me but I didn’t think about it until a bit later.
Then you chose the god you want to bring into your life. Mierzwicki uses invocations from the Orphic and Homeric Hymns as general invocations and then spells from the Egyptian Papri to bring the godform in.
There is not much unity between the different godforms.  For example, Mierzwicki gives you alternative forms for each of the main godforms which you are expected to visualise.  However in some of the godforms he does not give any.    This weakened the ritual for Aphrodite considerably.
The other issue was that Mierzwicki appears to have assumed that the targets of the papyri were Greek gods, rather than the more exotic Greco-Egyptian mix.  This belief lets him down completely in the “Ares ” working because, as he points out, there are few spells connected to Ares in the Papyri.
To get around this problem he uses a love spell which is supposed to bind Aries and bring him to you.  Not really something I would want to do.
In fact the Papyri are full of Ares gods forms, just not under his Greek or Roman name.  The role is taken up by Typhon or Seth and there are numerous spells too him that will get him to show up without having to bind you with love shackles.
In fact the famous “bornless ritual” which is beloved of GD and OTO magicians uses a composite Set- Bes figure to perform an exorcism.
There appears to be an idea that you can use some of these spells and the names associated to them for other purposes.  I am not sure that is entirely correct.  In the Ares case shackling the god as if he is a love object is not the same thing as invoking him.
I also think that Mierzwicki played down some of the underworld aspects of these godforms and I would have liked to have seen his take on that issue.
This might seem like I am being hyper-critical and I am not.  I am still working my way through this book and am having valuable insights.  It is also invaluable as I work my way through the Papyri to come up with my own system.
There is some very useful material here which can save you hours of internet research.  To find out the meanings of some these names you have to do a lot of research to find out what you are invoking.  Some of the names are actually lost to time, so you can waste a lot of time chasing dead ends.
What I also find valuable in this book are the examples given from Mierzwicki ’s workshops of people’s actual experiences so you can see the sort of effects the rituals have with others to compare them to your own.  I think I will attempt to make this a feature of my own writing on esoteric rituals to provide guidelines.
Anyway I think this book is very important and well worth buying if you are interested in approaching this fascinating field of magic.

Addition  which did not make it through the comment checking system (being too big to fit)
Jake Stratton-Kent replies:

Though I haven’t read this book, I’ve seen it discussed elsewhere – and responded positively. Looks like I better grab a copy when the opportunity arises. Anyhow, I’ve been familiar with the PGM (and
before that Goodwin’s ‘Fragment’, and the Leyden Papyrus) for a long time, and any modern look at them has to be welcome.

That said, there are some interesting issues to be examined here, which may sharpen up PGM studies.  The first is, recasting the papyri as planetary magic retrospectively is probably not the way to go (the difficulties with Ares and Aphrodite reflect this ‘non-alignment’);
the papyri are not the Heptameron or the Grimoire of Turiel, and should not really be approached as an alternative way of looking at these methodologies.

Astrology was certainly the main model of magic of this period, however, the decans, lunar mansions, celestial pole and other details are at least as significant as the planets. Reference to Hellenistic astrology would also be useful in a book of this kind, I don’t know if
that is addressed, but at intermediate level and with an astrological context, it is certainly required.

Also there is much in the PGM that is not specially astrological so much as concerned with this or that god specifically, not to mention the very large role of the dead. I echo the earlier comment about the all embracing importance of the Chthonic realm in the implied cosmology. The author’s response to the earlier comment appears contradictory. In any case, the underworld is so important to the
overall conception that it requires addressing from the beginning of  any approach to the papyri – *before* we ever get to intermediate level. This requirement might be lessened considerably were there not widespread ignorance of the real import of the term ‘Goetia’; as addressed throughout my writings for Scarlet Imprint.

As a grimoire magician of sorts, problems surrounding use of animals and other exotic items is something I’m more used to solving than a Golden Dawner – though there are also contextual angles (like drowning = deification, and the legend of Osiris). I don’t support cruelty to animals  and can look to Orphism to traditionalist support for finding alternatives (also applicable to later issues of the same kind). There is also a section of the PGM which ‘interprets’ such uses in terms of
plants, a good place to start.

I agree with the author about Aeon, he is distinct from Tahuti – more similar to Sabaoth and Zurvan, as god of eternal time (thus distinct from the ‘extra-cosmic’ deity of Platonism, normative Judaism and of course Christianity). The relevance of such a deity to a ‘Late Pagan’ astrological context is fairly plain, and does not actually tail off there. This may be legitimately reprised – IMO – by those operating later planetary magic ala grimoires and other sources. These are issues I will be addressing further in the near future.

My campaign regarding the Headless One reaches back some decades, with earlier blanket rejection of my thesis gradually giving way to ‘what everyone knows’ being reassessed; but the case is not yet closed. He is not a suitable candidate for an Ares ‘stand in’; there is a quite distinct astro-cosmological context which is not planetary in nature. See Hadean Press for a pamphlet approach to this important figure, and even more so the forthcoming ‘Testament of Cyprian the Mage’ from the Scarlets.

>From my perspective the PGM are no more suitable for an unreformed Golden Dawn approach than is ‘Archaic Goetia’; indeed as things currently stand Goetia (properly defined) and the PGM are compatible mainly with each other. Both are badly served when transferred to ANY context involving the supremacy of a transcendental deity and demonisation of the underworld. Such problems may be overcome, but the Occult Revival requires some serious rethinking, some ‘ecumenical’ or ‘meta’ models and proper appreciation of its roots in order to achieve this. We should take our collective time over this and do it properly – reaching outside narrow focus peer groups to wider interactions to
achieve it. Quick fixes should be avoided.

In the meantime I recommend both the Solomonic list and in particular the Grimorium Verum list on yahoo for discussions in and around some of the issues – including reassessment of Archaic Goetia as the root of the subsequent Western Tradition, in which the PGM and the syncretic period play a major role.