Today the Goetic magician Jake Stratton-Kent posted an interesting statement on his Yahoo group where he derided ritual magicians tendency to form masonic style groups.
Like many of us he find the ‘Masonic’ model a dead loss in the many, areas of modern magic where it applies.
He said that the masonry was only any good when non-attendance at Anglican church was an imprisonable offense in England and there needed to be somewhere to go for freethinkers.
Stratton-Kent thinks that the Secret Society model is not only unhelpful, but actively counter-productive. It is the principle reason why so much energy is expended fighting tiny little wars between factions (between witch groups, between rival Golden Dawns, between thelemic groups etc etc),” he said.
I have shedloads of sympathy with that, but I can only take it so far.  The only use for a masonic style approach is in the concept of an initiation.
However I do not believe that an initiation should be done in a masonic way.
A masonic approach is to have a ritual which is performed without scripts and designed to have an effect just by performing it.
This does work to a limited extent.  You have a psychological effect and sometimes you get energy or an atmosphere off it. But there is nothing new about this. You can have a similar feeling seeing the performance of a life play.
But a real initiation is more than just that.  Firstly it is a form of psychic surgery on the candidate’s sphere of sensation which enables them to have different esoteric experiences.  This is done, not just by the performance of the ritual, but also through the complex interactions between godforms and the divine entities which are called to participate in the rite.
This is where the ritual meets something akin to Stratton-Kent’s methods of working.  The reason that it never sees the light of day is that it is not talked about much.  Many modern ritual groups do not know about it, and the only written details can be found in hints in Crowley and the Z documents of the Golden Dawn.  What has been written down is only hints.  Each group has to find its own way through those magical processes in an initiation.  Pat Zalewski has printed some of his in his Golden Dawn Rituals and Commentaries book. 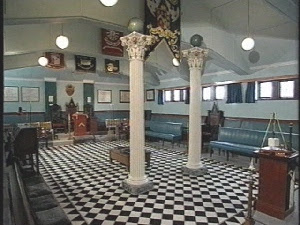 Looking at the Magical Papyrus you find these different techniques used for initiations but they are very often self-initiations.  However what the masons taught was that the use of drama by a group could add a powerful spin on these techniques.
What the outer order of the GD does is open the way for a person to become a magician.  Once they reach that point,  the second order should be a group of magicians meeting together to conduct the same sorts of experiments that Jake is talking about.  The fact that they did not, is really not the fault of the system, so much as the people in charge of it.
In the second order of MOAA for example you are given your tools and told to charge them.  After some training you go on to experiment and develop the material.  The only onus is you share the results of your experiments with other people in the order and try to train people in them.   The reason that approach has not made much impact on the wider world is that we are still working on  getting people to the point.  It is coming close though.
In this framework a group can provide support and prevent a person going completely barking if one of their experiments gets out of hand.  A solo magician has no one who can perform an intervention for them if they start thinking that they are talking to secret chiefs who claim that they are important.  Of course semi-masonic orders are full of chiefs who are trying to do the same thing, in that case there a lot of group members who might engineer a coup they think their chief is talking bollocks.
Share on Facebook Share
Share on TwitterTweet
Share on Pinterest Share
Share on LinkedIn Share
Share on Digg Share