Skip to content
David Griffin has been caught doctoring quotes in my book King over theWater in a desperate bid to rally his own Order into a flame war.
Earlier this week Griffin ordered his troops to hit Amazon.com with one star reviews because of a phrase in my book which he claimed said that I was accusing his order of being a personality cult.
This is the quote with which he rallied his troops:

This quote apparently caused his members to do his bidding and post nasty messages about a book that they had not read. When I read his quote I thought he had just mis-understood what I said, because at no point had I ever considered his AO re-enactment group a personality cult.
At the request of another esoteric author, who thought I should have made that clearer, I re-examined what I wrote and discovered that DAVID GRIFFIN had FORGED THE QUOTE BY ASSEMBLING IT FROM HARMLESS QUOTES which were on the same page.
This is something which is frowned upon in journalistic circles because is a form of forgery of reality and can lead you into a lot of legal hotwater. Here is a copy of the page with the parts of the sentences that Griffin assembled to lie to his own order. The fact that the … has been removed for the crucial last sentence to attempt to make it appear like I was talking about his order. 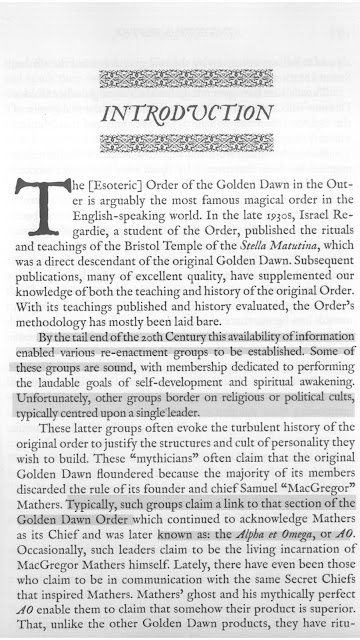 One has to question what sort of leader would forge a document to incite his order to attack another group like this? I feel sorry for the victims of this scam,  because they have been duped into believing that they have been attacked by the publication of this book, when they clearly have not. So I assume that they were ignorant of what their leader was telling them.
Now everyone in the AO has been informed. If I were a member of the Griffin’s A+O I would be seriously wondering what other lies he might have told me. Valid Secret chiefs, turning lead into gold, lineage to the original Golden Dawn  all these things suddenly would be questionable. If he forges quotes like this what other unthruths has he foisted upon the A+O?
David claims that he is only interested in protecting the members of his Order. If that is the case he should resign to prevent the Order being further damaged by his antics. Until he posted this forgery of the quotes my book there was no flame war with the rest of the Golden Dawn community and now suddenly there is.
All I can assume is that David is either desperate to start a Flame War or there is something else in the book which he does not want members of his order reading.
The members of David’s order are now faced with an ethical choice. It is the sort of choice that many individuals face on the esoteric path and defines them as either true spiritual people or sheep. It is the same question that those in Robert Zink’s order had to face. Do you continue to follow a man who manipulated and lied to you. Is it possible to follow a leader who takes you into combat with people who would otherwise be your friend?
David has made a lot of the fact that I called those who posted one star reviews against my book “brown shirts.” Sadly that is exactly the type of people who follow such leaders as they bully others. By following such a leader you become forever tarred with your association with him.
Griffin has been telling his members that MOAA is getting ready to overthrow me for daring to start a flame war. However it is my own members that have insisted that I post this evidence of the forgery of my quotes so that others can make an informed decision as to whether they will continue to support David Griffin.
After this I am not posting anything about more David Griffin and his group. I am not interested in any flame war with anyone, but I will not debate anything with people who are not true of voice.
Share on Facebook Share
Share on TwitterTweet
Share on Pinterest Share
Share on LinkedIn Share
Share on Digg Share