The 16th-century French soldier Christopher Cattan is hugely important when looking at Geomancy. His book The Geomancie codified the astrological meaning of Geomancy for hundreds of years. But, unfortunately, his book has been largely ignored by many modern geomancers who are more influenced by shortened forms developed by Crowley, Regardie and Franz Hartman.

After finishing Star and Stone, which develops Geomancy into a modern framework (including looking at Cattan), I noticed Cattan’s interpretation of the Left and Right Witness and Judge (the court) were different from modern geomancers. If followed, this would give different results to a reading.

Cattan was not interested in chart perfection (or rotating the chart) and considered that the court was vital to getting a “yes” or “no” answer from a reading. Once this had been obtained, you would look at the figures of the chart to see how the events asked about would take place.

This seems simple, but the examples that Cattan gave suggest there were other underlying methods that he had not provided.  It also creates a few questions. What happens if the Judge does not agree with either witness or agrees with both? What happens in questions which are not “yes” or “no”?

Cattan gives examples, so it is possible to see his results, if not his reasoning.

Mean is applied when the Judge cannot make up its mind or agrees with both. This can be seen in the LW Fortuna Major and RW Fortuna Minor Judge Via combination. Looking at this, these are two positive figures, and even the Judge should be a bit happier.  But Cattan warns that there is something wrong. It might be that Via is a little unstable and delays the positive aspects of the question, or all this goodness cannot express itself. In my view, this is when you consult the “sentence” or the “reconciler” to see what is happening.  The chart will also provide details.  Note that while all the aspects such as occupation, companionship apply to “mean” reading. They cannot make the reading positive (or negative) but can only explain why the question is only average.

Evil, ill and Good and very good readings are easier to work out.  A good reading would be LW Fortuna Major and RW Aquistio, with Judge being conjunction. The Judge agrees with both (because it unites the two), and another good one would be Left Witness Laetitia and Right Witness Caput Draconis, with the Judge being Via. In this case, the Judge is siding with Caput Draconis, which is a beginning and a journey at the start of the story (there is nothing happy about Via for the Judge to agree with).

Ill readings can be seen with LW Laetitia and RW Puer with the Judge being Aquisitio. Puer is a negative figure, and the Judge appears to side with Laetitia. This one might need some context to explain. Say the question is “will I win the lottery?” Puer would suggest that there is some conflict or stupidity involved in the question. With the Judge leaning towards Laeitia, the lottery gain this week will go to someone else.  I would ask the querent “did you remember to buy a ticket?”

Extreme readings for very good or evil appear to apply in specialised cases, which appear to depend on the question.  Each figure is said to be better in some readings than others. Rubus, for example, is positive in readings about love and war but evil in most other questions. So if the question is romantic and Ruebus shows up next to a positive figure (and the Judge agrees), it must be read as very positive. However, if both the Left and Right Witness are Ruebus and the Judge is the passive Populus it was considered very evil.

This involvement of the question and the meaning of the figures seems essential, even to Cattan, although his court guides do not seem to show it very well

So let us look at a couple of examples:

Will I repair my relationship? 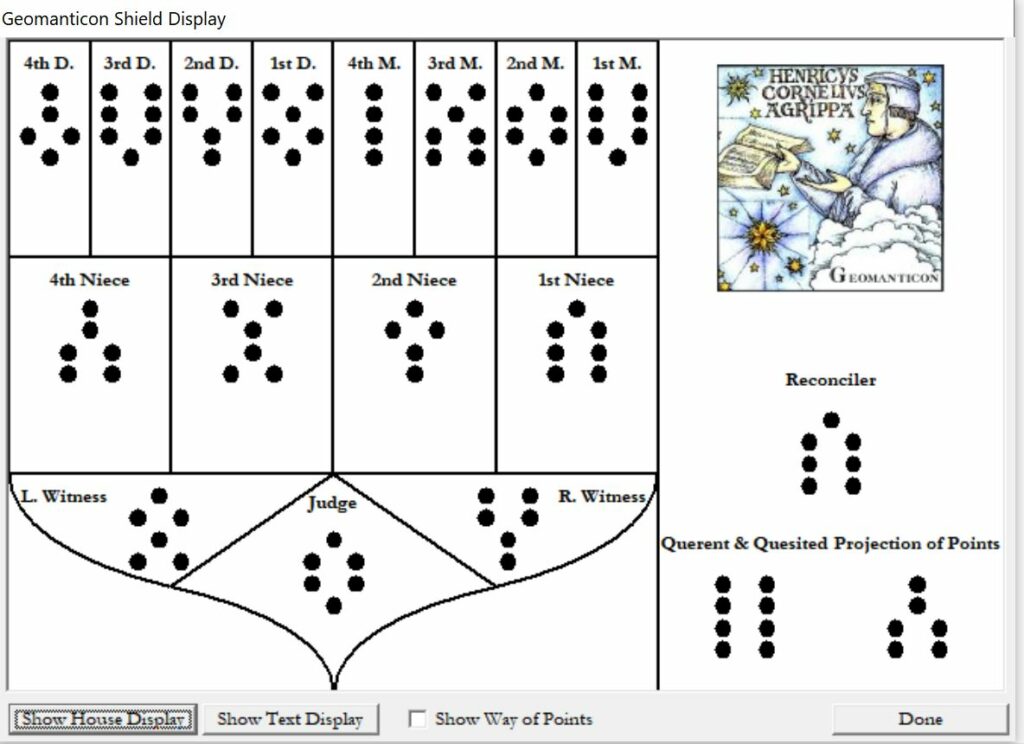 The quested would typically be no and is negative. Amissio is positive in relationships where a sacrifice has to be made, and this is the case with this question.  So Admissio would be positive.  The Judge, Carcer, cannot make up its mind, and the answer is mean.

This could be read as the querent is too stubborn and is sticking to their view, and while the other person is prepared to give ground, the situation will not be resolved yet.  In this case, I would look at the sentence Laetitia, which means that there is love there and some reconciliation is likely.  Cattan would then use the “mean” reading to look at the chart for why there is no movement. It appears that the querent and his partner (in the seventh house) are depressed but pressing on together regardless.

Will I recover from this illness? 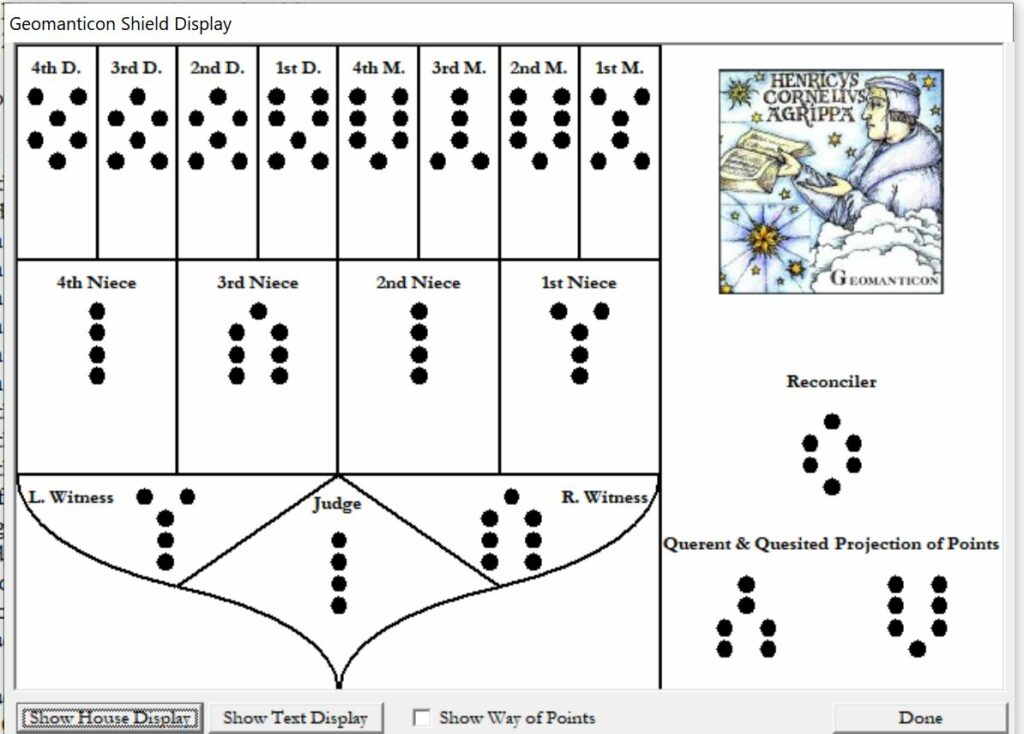 This would generally downgrade the reading to “mean” but since all the witnesses are good and the Judge can decide on a positive course, it is a tentative “yes.” The reconciler Carcer shows that the reason why things are not all a box of fluffy ducks.

This indicates that the illness will take time to heal or require hospitalisation. (It is a moot point if you need to look at the reconciler for this reading as the Judge is confident that things will get better). Looking at the chart, we can see that the illness is admissio (it is in the sixth house and doubly strong). This suggests that things will worsen before they get better (Star and Stone suggests checking out that the person is taking the right drugs or getting a second opinion).