Should the French King make peace with the Holy Roman Emperor? 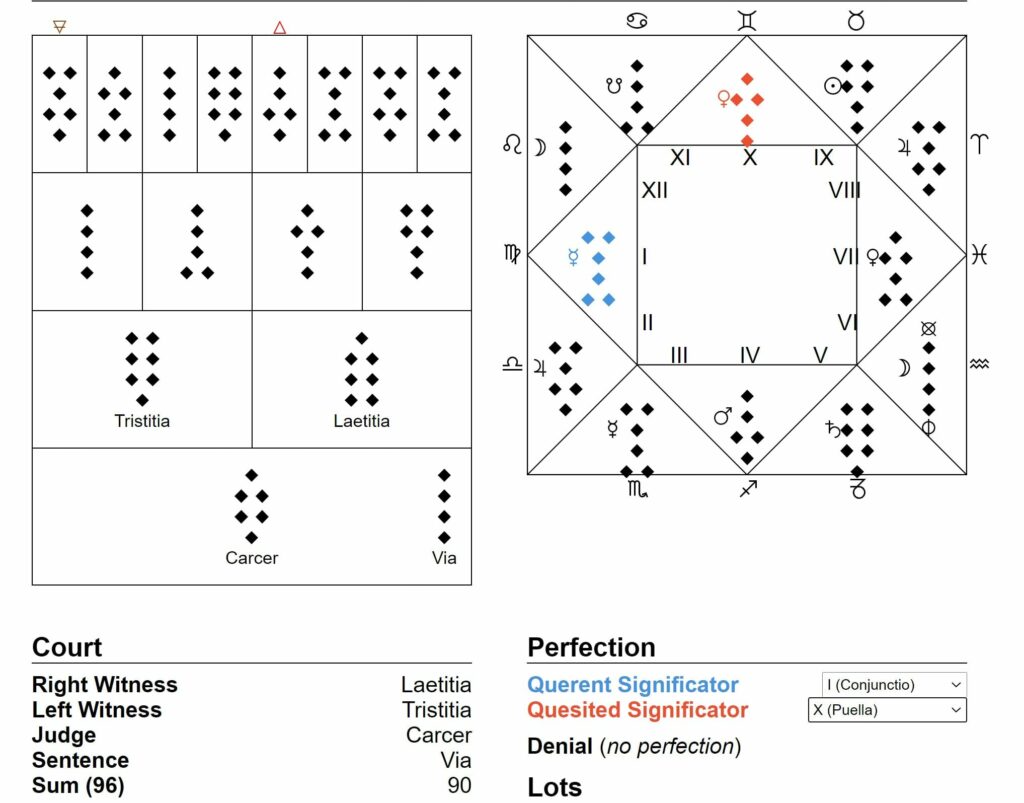 On 21 July 1536, Cardinal Agostino Trivulzio visited France to broker peace between Francis I “le Roi Chevalier” (think Henry VIII with a big nose) (pictured) and the Holy Roman Emperor Charles V.
The Geomancer Christopher Cattan was asked, “should peace be allowed to happen?” The two countries were headed into the Italian Wars, so we know that peace did not happen for several years.
The court is negative. While there was some optimism for peace, the Left Witness was Tristitia, and the Judge was Carcer which at the very least pointed towards a delay.
Cattan said that with Conjuctio being in the first house and moving to the third talks could begin on peace. However, he looked at the fifth house which was the house that decides if promises would be kept and noticed that there was a bad aspect to the fifth house which was Tristitia.
Cattan looked at the seventh house which was the house of France’s enemy Charles the V. This figure was Amissio which Cattan felt meant that the King did not want peace. Amissio would mean a “loss” to Charles if he accepted peace.
There are two translations here that Cattan nearly ignores. Both these figures would normally suggest that peace is possible if something happens through a third party. The first is Acquisitio appears after the house of the querent and after the house of Charles in the eighth. Cattan says that this means the transfer of substance from Francis to Charles. However, Charles would not be able to keep that substance long (because he was Amissio). Cattan points out that is what happened, as Charles was forced to give up the war gains, he had made at that point in the war. Cattan does not notice that Via is behind Henry and Charles which suggests that something is changing. In fact, the negotiation was swiftly ended, and the Italian Wars continued until the Truce of Nice on 18 June 1538.
Share on Facebook Share
Share on TwitterTweet
Share on Pinterest Share
Share on LinkedIn Share
Share on Digg Share