One of the reasons why magic does not work is because a person has not understood what they have to sacrifice for the rite to happen.
In different systems of magic, there is the concept of sacrifice – of giving something up to achieve a desire or receive something from the gods.  Usually this is symbolic; a person killed an animal, or poured wine into a trench to give something up to achieve a goal.
Even in initiation, the concept of taking an oath can be considered a form of sacrifice where the “victim” is the person who is dying so that they can become something more.  They are narrowing their life and promising not to do something so that they can be more than human.
However, there might be something more behind these symbols than first appears, which could lead us to an area of experimental magic.
Most magicians believe that magic can be used to create a change in their lives or environment.  They do rituals because they want something to be different.  In many ways they are creating a new universe in which certain undesirable components are not there.  Effectively they are taking the role of the mind of god, Thoth, and speaking a new universe into being.  Having made their last utterance, and cleared up the wax, which has stuck to the carpet, they wait for the new universe to unfold around them.
Magic seems to create four “effects”: the first and least noticeable is that it does not work at all.  The ritual is said to be a failure and often others are tried.  The next is that something happens but it does not quite manage to achieve its goals.  The third effect is that it works but things do not work as intended and, while the primary goal is achieved, other unexpected events happen.  Lastly, the ritual works and the new universe replaces the old one.
Recently I have come to believe that the reason that some rituals do not work is something to do with the strength of the old universe and the desire on the part of the magician (or outside forces) to maintain it.
Ask yourself, for this ritual to work, how much change will be required.  Some rituals require cosmetic changes to the existing universe and should be more likely to be successful.
It makes little odds to the universe that you get to a certain destination on time without the aircraft developing turbulence and you having to be anally probed by US customs and immigration when you arrive.  A travel ritual to protect against this will probably succeed.  But a much more considerable aspect of your life would change if you won a huge sum on the lottery.  You would also be doing “black magic” to prevent another person’s universe changing as result of your win.
Let’s look at another area of “low magic” to explain the problem.  You had a problematic relationship with a person and you were always fighting.  One day you both worked out this was self-destructive and ended it.  You find yourself alone and do a ritual to find a new partner.  Nothing happens.   The answer might be that the old destructive relationship is still in your life.  You can’t ask the gods to create you a new universe with a new one until you have a space to put a new person inside it.
This idea of “having the space” to roll out the new universe is vital. What appears to happen is that when the creator gods of magic unfold your new shiny universe, there have to be holes cut inside the design for all the things you want to remain.  After all, if you invoke for a new job you do not want your relationship to pack in, or your dog to suddenly vanish overnight.  The problem is that if something in your life is central and antagonistic to your ultimate goal remains, then the new universe will end up exactly like the old one.
While the creation of a new universe is one idea, with its own set of gods, we have to ask the important question “what happened to the old one?” and “what needs to be chopped out of my universe to make this work?”  It is these things that need to be sacrificed for us to make sure our magic works. 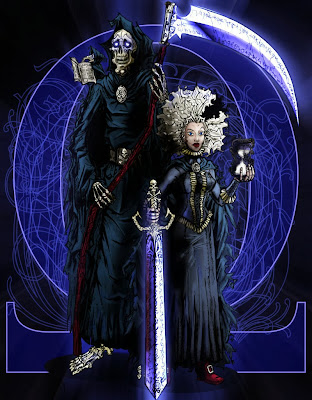 This god of sacrifice is a variation of one of the many underworld death gods within religion.  They are Satan, Set, Baron LaCross, Typhon, Pluto, Dis Pater and Saturn.  Before any creation ritual they must be unleashed onto your existing universe, removing those things which stand in the way of what you want.
The first thing many of you must be thinking is “hang on, allowing the destruction of my existing universe by letting this lot make merry with it is insane.”  In some ways you are right.  But equally does that really mean that you don’t want something enough to make the sacrifice?  Is it possible to say that something is your True Will if you are not prepared to sacrifice something else to obtain it?
This attempting to hold on to a large chunk of your universe while at the same time hanging onto your old one is simply not possible.  One change should create other dramatic ones and when you do your invocation, you unconsciously know what each one is.
In fact when you do an invocation you will find yourself putting riders on what you want, which could ultimately kill off any potential universe unfolding correctly.  “I invoke for a magical order which is suitable for me, but has to meet within walking distance of my house, have a pub nearby, have no fees and will recognise my magical genius.”
So how can we find out what impact our magic will have?  How can we find out what we have to give up, to obtain what we want?
If we invoke gods like Thoth, or our spirit guides, or who (or whatever) to help us create a universe, we have to invoke the death gods to help us discover what our sacrifices will need to be.
This might be the reason that Dis Pater, the roman Hades, was called the father of all riches.  It was because he let the old bad things die so new wealth could come into a life.
Before you do any invocation which would lead to the creation of a new universe, you should invoke one of the death gods to ask their permission and to request that they tell you what the sacrifice will be.  They will probably tell you and once that sacrifice is made you can invoke for your new life (if you still want to go ahead with it).
It might be that to get what you want you really have to break up with your girlfriend, who is holding you back.  You might have to leave your mother’s basement and start taking some responsibility for your life.  You might really need to leave the country before the police knock down the door, or give up that person who you are convinced is the love of your life.  It will be the underworld death gods which will arrange that for you so the good work can begin.
It sounds curiously inverted, invoking a death god to ask for a new life, but this is exactly the principle behind a Voodoo magician invoking , who was connected to the king of the dead Baron LaCross.  Expeditus, as his name suggests was called upon to make things happen today rather than tomorrow.  What better way to make something happen quickly than if all the obstacles to your new universe are sacrificed.
Share on Facebook Share
Share on TwitterTweet
Share on Pinterest Share
Share on LinkedIn Share
Share on Digg Share