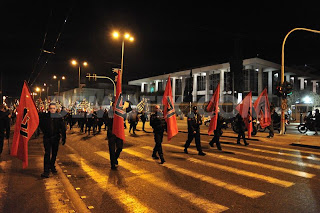 There is a move afoot within the Golden Dawn community to liberate the name Golden Dawn from a deluded bunch of Greek Nazis who, in the popular mind, have taken it over.
In actual fact this confusion has come from the fact that the Western Press have translated the name of the Nazi political party Chrysi Avgi.   The reason is probably that Fox broadcasters can’t pronounce Greek.
The group, which is xenophobic, homophobic, and misogynistic has a few things going for it.  It moves into deprived towns in Greece and offers food and community services to Greek nationals who otherwise would starve.  This is the same tactic used by the Muslim Brotherhood.  When Greek’s economy picks up, the group will fade away, fortunately its leader Nikolaos Michaloliakos  is about as charismatic as a road accident.
However the group has been linked to what the Greek Orthodox Church calls a “rise in paganism” Seraphim, the bishop of Piraeus, spoke publicly of the paganistic dimension of the Greek Golden Dawn.
This would be news toChrysi Avgi as it is very proud of its Greek Orthodox links, something the church should be ashamed of.
But the danger is that the view might be accepted by the Western Press and the Nazi Golden Dawn might forever be linked to that of the magical one.
Already a Google search for the name Golden Dawn is more likely to result in political finds rather than occult ones. It is only a matter of time before right-wing nutjobs start applying to orthodox golden dawn groups looking for a spiritual dimension for their backward politics.

It is not as if the Golden Dawn does not have a few neo-nazi skeletons in its closet.  n the 1930s Yeats lent his support to the openly fascist Irish Blueshirt movement, led by Eoin O’Duffy, a former IRA Chief of Staff who had become Police Chief of the Irish Free State. The Blueshirts aped Mussolini’s Blackshirts and Hitler’s Brownshirts, down to the same uniforms, the same stiff-armed salute and the same greeting: ‘Hail O’Duffy!’ Yeats wrote three marching songs for the movement which sent a 700-strong contingent to fight for Franco’s Fascist uprising against the Spanish republic in the Spanish Civil War of 1936-39.

The much-admired Maud Gonne was a big fan of Hitler and the Nazis, and her daughter Iseult even hid a German parachutist in her home during the second world war.
As I revealed in my book King over the Water, Samuel Mathers’ closest friends included members of the French Synarch movement and it was likely that the “politics” he was involved with was of that movement. The Synarchs came close to power under the Vichy government in Paris.  I personally think that it was these Right Wing links which caused the end of the first Golden Dawn.  Yeats had left the Golden Dawn by that point in his career.
The far-right is attracted to the perceived elitism of occultism as well as the secrecy and dressing up.  Because of their conservatism, masonic groups often have to watch out for Neo-nazis trying to use them as recruiting grounds.

Normally such types quote Plato’s Republic as occult justification for their politics. Plato called for a government run by an elite team of philosophers who did not work for money but ran the country on philosophical principles. As I wrote here Mussolini’s favourite occultist, Julius Evola took this idea a stage further.  One of the things I find alarming about this period in occult history is Evola is being dusted off and being presented as an occult genius.  It is something I put down the Right seizing an economic opportunity to peddle its nazi manifesto to the esoteric world again.

But lets be clear about this.

The ideas of the Far Right (and left for that matter) are alien to occultism, mysticism and magic. If you find any of these ideas attractive, you cannot be a viable member of the Golden Dawn.  You might learn a few techniques, but you are forever locked out from discovering the real secrets.

Why is this?
The Central doctrine behind real occultism is that the universe is an expression of the One Thing.  Therefore none of the beliefs of the Far Right tally with that.

The Golden Dawn system of magic is never about extremes, it is always to do with balance.  The extreme politics of the Far Right and Left are Qlippothic within Golden Dawn philosophy.

One race cannot be superior to another, one religion cannot be better than another, each human has its function within creation.  You cannot use violence against another person because they reflect an aspect of the Divine and you are doing it to yourself.   Nor can you blame them for your problems.  If immigrants really are taking jobs, a more human approach is to make sure that their country of origin is a better place to live.  People rarely leave their country for the fun of it.  If your country is fucked, then do something about it don’t blame your local Jew or African.