Skip to content
I stumbled upon the attached picture when I was searching around recently, It shows Mathers taken in 1911 by the Daily Mirror. It is an interesting picture as it shows that Mathers’ hair had gone white and he appeared to be dying it to keep himself looking as if he had succeeded making the philosopher’s stone. 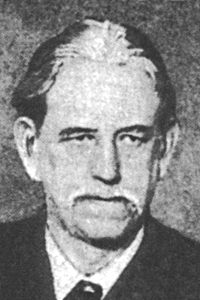 In 1911 he gave an interview to the Daily Mirror and apparently forgot to touch up his roots. As a result he has ended up looking remarkably like the Bride of Frankenstien.  We wonder if his Secret Chiefs approved.
Given the fact that Mathers was supposed to be dapper he looks a bit dishevelled, like someone who has spent the night drinking a little too much potion of eternal youth.
Mina would later complain that he was “drinking a little too much” – a problem that got worse after he returned from the UK. It might explain why he was unable to bring in much new information for the AO, although Mina later told Yeats that despite him being sick for three months during the First World War he was fit right up to the day he died.
Share on Facebook Share
Share on TwitterTweet
Share on Pinterest Share
Share on LinkedIn Share
Share on Digg Share