Skip to content
The Golden Dawn is a system of spiritual evolution. People often forget this and assume that it is all about magical techniques and intellectual information.
As far as history goes this state of affairs has been encouraged. Papers on the various Golden Dawn components were written, promoted and demoted in the grade structure often giving the illusion that “more powerful techniques” were given in future grades.
However more powerful techniques seemed to have dried up by the 5=6 grade and no one appeared to be able to provide a system for the 6=5 and 7=4 grades. Felkin came the closest with two very impressive rituals but the actual grade material that went with it was, in theory, a little sparse.
This has lead people to attempt to create new 6=5 and 7=4 grades which are providing “new information” and “powerful techniques”. However more techniques and more intellectual information is not what the 6=5 and 7=4 grades are all about.
The 5=6 grade is called Adeptus Minor. In that grade you are given many practical techniques and magical processes. These are incredibly involved and cover all the major branches of the Western Mystery Tradition. By the time that a person has completed this training they should be a competent magician within the Golden Dawn tradition. They should be experienced in Inner States and practical magical methods. They should equally be able to take magical systems and convert them to the Golden Dawn system. I will give you an example of how you can take something that is outside the Golden Dawn system and make something that fits and appears to give you more information.
Agrippa sigils using planetary squares
One of the incredibly basic forms of magic used by the Golden Dawn was the art of drawing sigils and seals on Planetary squares. The squares produced by Agrippa were basic. Below is a simple Saturn square. (I worked this out in the 1990s  before I was a member of the Golden Dawn and had to redraw the diagrams from an old dot matrix printer)

However if you “enhance” the square using Golden Dawn information, it appears much different and adds considerable teaching to the nature of the square. 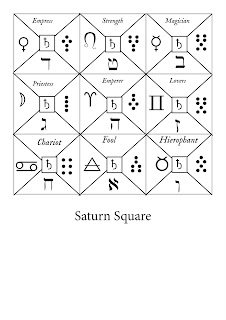 From this we can see that the square is centred on the Tarot card The Emperor so we know that Saturn energy sets things in Order. Paul Case would say that the top lines were the initiating energies, the second line where the catalysts and the third line were the results.
More interesting stuff comes when we start to use the planetary square to create a sigil of a spirit or angel. Here we have created the sigil of Zazel by connecting all the letters of the name onto the square. (The lamed is missing but is converted to Gimmel be found by using the Al Beker chart). 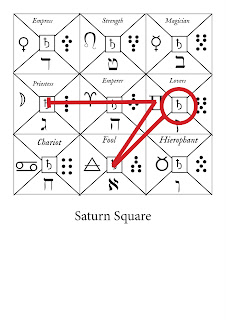 What we can learn from this is that Zazel is heavily committed towards communication and Gemini, which is something we would not expect from a Spirit of Saturn. Indeed with the Fool we would think that the spirit is pure air. The only thing that seems to root him to anything would be having his feet in the waters of Luna and the High Priestess. Using the Golden Dawn Talismatic associations we could visualise a crowned being with a thin intelligent face, light hair (you could argue a case for a dual headed Janus). Winged with a swastika lamen, holding a sword standing on waves of water. (note that if you are using the square you do not look up the talismatic image for Lamed, you look up Gimel). There is a lot more information which can be gleened from this method,   you could take it even further by adding the colour scheme from the vault and really sex it up. What would you get? Four points for Gryffindor for coming up with it. What have we really learnt here? We have simply fine tuned something which already existed and it may or may not be more effective. But is this sort of thinking advanced? The answer is no. It is pure and simple intellectualising which may or may not take us somewhere.
The 6=5
The Golden Dawn was apparently very slap dash when it came to the 6=5 and 7=4. Mathers wrote two rituals which were quite simply rubbish and boosed a couple of 5=6 papers to higher grades in the hope that people would leave him alone. Felkin did better with two rather good rituals but weak teaching. Paul Case did not believe it was possible for an order to train people at 6=5 and stopped his chapter at 5=6 (he did issue 6=5 and 7=4 grades. Will Chesterman had a 7=4 grade on his Premonstrator certificate,which was signed by Anne Davies hanging on the wall of the temple at Naenae).
Whare Ra taught that the 6=5 was more of a mystical grade than the 5=6 and the work of the grade was to use the lessons of the 5=6 to find your own spiritual path.
Certainly the approach to this grade was much more transpersonal than the 5=6. In addition to goetic work and some other experimental systems, the focus of the grade appears to be using greater magic for the good of humanity. Through this service, the Greater Adept learnt the humility and sacrifice to pass on to the next grade. In many ways the 6=5 is about the surrender of the personality completely to archive the will of the One Thing. Thus you know that training system has to be geared towards teaching that, rather than more ways that the personality can be agrandised.
The 7=4
This grade was even more mystical. Instead of working magic, 7=4 was the magic, or at least working to become it. Given this slips down to what your definition of magic is, it is probably best explained by using mine as an example. Magic is the art and science of becoming a co-creator with God. Instead of using that science, you are a living example of it in action. This can be said to be the goal of the grade as the jump between this state and the 6=5 is high. No longer are you a person working magic for the good of humanity, you are the magic working within humanity.
Both these grades depend on the knowledge of the 5=6, but they are not looking for more information. Instead they are looking to apply information gained effectively. So an order teaching new information at the 6=5 and 7=4 grades is barking up the wrong tree. Any new information automatically categorises itself at the 5=6. If it is a system, new or not, it is by its very nature 5=6.
This is not to say that there is no scope for teaching at the 6=5 and 7=4, however it has to be a different order of training than we have seen before and not just systems, and intellectual chewing gum.    The 6=5 is easier in that its goal slightly more familiar – use magic at bigger targets. The training must be how you manage this. Equally the ability to use the system as part of a spiritual quest is not something that the Golden Dawn system has done particularly well up to this point. The 7=4 is the last stab that the Golden Dawn system has of training anyone anything and this is one region which requires serious research from the next generation of Golden Dawn orders. Mathers, Westcott, Felkin and Case failed to manage it. While we work to create more intellectual systems to fill that gap, so will we.  While we teach that all we need is a new system incorporating Alchemy, sex magic, or Macramè, we fall further from what these higher grades mean.
Share on Facebook Share
Share on TwitterTweet
Share on Pinterest Share
Share on LinkedIn Share
Share on Digg Share