Skip to content
In his review of Names and Images by Peregrin Wildoak, the British esoteric writer Gareth Knight said that the book shows that there is a magical substance in the Golden Dawn after all. 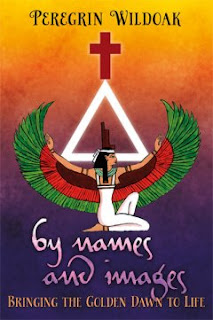 The Golden Dawn has become a bit of a joke in the land of its birth. It is forever associated with people claiming high grades, flame wars, court cases, using shedloads of magical gear, and wearing the silliest of robes. In the UK magical scene you would never see a trained magician shove 7=4 under their name in public even if they were entitled to it.
It is one of the reasons that the US Golden Dawn orders have had a limited impact in the UK, because phrases like “Power Week” and other hard sell language is seen as belonging to the other side of the pond.
Many of the perceptions of the Golden Dawn are based on what has been written and its teachings. So British adepts look at this material and say “interesting… so what?” The rituals, if seen on their own, use dated language and lack magic.
In the Golden Dawn, the serious magic was printed in the 5=6 and it is that material which forms the basics of British magic today. But that is the point. It is just the basics. If you were so minded you could go through the pile of 5=6 material and understand it in a weekend. You could probably construct some pretty good experiments to try it out. But it is not magic in the way that the British magic scene works these days. They look at the GD with its huge equipment requirements and think that it is a dinosaur from the past.
To be fair they are not the only ones. There are those within the Golden Dawn community who see holes in what is available. There are calls to expand the curriculum and add material which was lacking or under developed.
In my early days of training I can’t say I ranked the GD system particularly highly either. I liked the more inner approach of godforms and inner work which was touted by the Inner Light tradition. It was not until I read Pat Zalewksi’s Z5 book that I saw that what the Golden Dawn did and what I was doing in the Inner Light Tradition was the same thing. Bits of what I had been told by the Whare Ra people suddenly made sense and the Golden Dawn always had an inner tradition which had never been talked about before.
Later when I became involved with the Hermetic Order of the Golden Dawn I started to understand that the written material which was given was just the tip of an incredibly complex iceberg. Those who thought it was all about gadding about in robes and calling yourself the Heirophant fast run aground on its unseen depths, and break up to the horrific strains of Celine Dion.
This was not something that was just more intellectual information and none of it was written down. It was the idea which lurked behind all the written words which inspired people like Dion Fortune. But even these people missed some important stuff which can only be seen when you have the order and its methods working in front of you.
Making those techniques real is a lifetime’s work, if you look at the implications of what is said and, like Pat’s Book, Peregrin’s book is a good starting place for those who want to make the system real.
Peregrin’s book shows the sort of work that people need to do bring the system magically to life. True at times he adds stuff, there is something on the unicursal hexagram which I have never seen before (although the Whare Ra people used it for planetary force, they did not use it the way Peregrin suggests). There is also a lot more material bringing the modern charkra system into the Golden Dawn rather than the Sphere of Sensation method which was used. Peregrin brings these in and explains them so that they are not alien.
But in my view where Names and Images is vital is when it is telling you what you are doing at this point and why.
It differs from Pat’s approach, which was tied to the rituals, and instead branches out into the magical system of the 5=6. Ideas related to the INRI formula for example.
There are also rituals for the solo practitioner to try and feel the system as well as aspects. The material here is solid and is peppered with stories about Peregrin’s experiences.
Yes it is a book to study, but equally it is a book to do. You can’t read it but have to try out stuff.
That is something which has been sadly lacking within the modern Golden Dawn. There are systems, upon systems and then sub-systems upon sub-systems within the GD, but that becomes a trap.
All Golden Dawn work has to be seen on four different levels and the ritual and teachings only a hint of what the magic is really about.
Peregrin’s book is the harbinger of what the Golden Dawn will become. It is an introduction to the idea of a magical Golden Dawn which is firmly rooted within the Inner. It might even be a Golden Dawn which appears new to many, certainly it is a Golden Dawn which many will want to suppress because it requires expertise that many “high graders” lack.
Nevertheless for the next generation of Golden Dawn student “By Names and Images” is a vital part of any collection.
Share on Facebook Share
Share on TwitterTweet
Share on Pinterest Share
Share on LinkedIn Share
Share on Digg Share