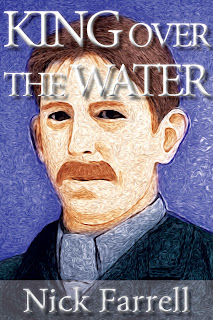 When Samuel Mathers included Enochian within the Golden Dawn system, he used a manuscript called Sloane 307 which he found in the British Museum. The document post-date’s Dee by some decades and is a practical way into the later Dee work. There was a belief that Sloane 307 represented a magical tradition using Enochian dating back to a closed circle around Dee. As I pointed out in King over the Water Samuel showed it to one of his early mentors Kenneth MacKenzie, who is the most likely candidate to have written the Cypher manuscripts.
Unfortunately for Mathers, Sloane 307 was unlikely to have anything to do with Dee. It lacked some important material from the first five of Dee’s diaries and was probably based on a person who had gone through the published version of “A True and Faithful Relation of What Passed Between John Dee and some Spirits” by Meric Casaubon and cobbled together a working magic system. Casaubon had managed to find all Dee’s Diaries other than the first five books and edited these to fit his theories about how occultism could make a sane and clever man go mad.
The early Dee diaries give information on the assembly of the table, the seal of truth, the ring of Pele and the Heptarchia system of Angels. All important if you are going to recreate Dee’s system of Magic but less widely used by Golden Dawn magicians.
In the 1920’s one of the leading lights of the Golden Dawn in New Zealand, Ewan Campbell visited the UK and conducted some research at the British Library on the Dee manuscripts.
Whare Ra member Percy Wilkinson told me that Campbell realised there was a lot missing from the conventional GD Enochian system and came back with lots of copies of the diagrams. According to Pat Zalewski, Campbell was tipped off by Langford Gaston who was the head of the Mathers’s AO, so it might mean that he was conducting a similar review of the Enochian system within the GD. This did not seem to have been implemented before the AO shut down in the 1940s, despite the fact that there were some minor changes to the Order in the 1920’s.
Mathers was aware that the material existed. He had written a paper called “The Seven Days of Creation Applied to the Seven Branched Candlestick” which has been lost. In his book Golden Dawn Enochian Magic, Zalewski has done a fine job in recreating what that document would have looked like. However it is a work for adepts in the Golden Dawn system and provides a lot of detail which in the Outer Order is not needed. However there is something in the Angels of the Bonorumwhich would be very useful to those beginning the path of magic and connected to the 1=_grade. It could give the Zelator a basic form of ‘low’ magic which they can use to fulfil their needs in the Outer Order while a the same time performing the Higher Magic of the grade work.
The Angels of the Heptarchia and these appear work at Yetziratic levels. They are essentially the Briatic Archangels as they manifest in Yesod.
The names for these Angels were split between seven tablets. Each tablet represented something ‘earthy’ which is also connected with the Nephesh of humanity:
The angels were formed by combining one letter from each tablet. They have aspects of each of them and therefore can control over every aspect of the Nephesh of a person, and that of the whole of the world.
There are 49 Angels; seven kings (Kether of Yesod), seven princes (Tiphareth of Yesod) and 35 governors (Yesod of Yesod).
The seven Kings are:
Baligon: (Haniel)
Bobogel: (Raphiel)
Babalel: (Kamael)
Bynepor: (Zadkiel)
Bnaspol: (Michael)
Bbapsen: (Tzaphqiel)
Blumaza: (Gabriel)
Their names are: Bornogo (Venus), Befafes (Sun), Butmonom (Mars), Blisdon (Jupiter), Brorges (Mercury),Bragles (Saturn) and Bagenol (Moon).
The Governors have a similar function in this system to the spirits and they work at the closest level to material substance.
Governers of Venus
Bapnido
Besgeme
Blumapo
Bmamgal
Basledf
Sun
Basmelo
Bernole
Branglo
Brisfli
Bnagloe
Mars
Bazpama
Blintom
Bragiop
Bermale
Bonefon
Jupiter
Balceor
Belmara
Benpagi
Barnafa
Bmilges
Mercury
Baspalo
Binodab
Bariges
Binofon
Baldago
Saturn
Bormila
Buscnab
Bmninpol
Bartiro
Bliigan
Moon
Bablibo
Busdana
Blingef
Barfort
Bamnode
In addition to this Dee mentions the names of 42 ministers for each planet. These are more spirits and their names can be found in the Heptarchia Mystica of John Dee edited by Robert Turner. The Angels of the Bonorum are Planetary and are connected to days of the week and equally the days of creation. These are arranged in terms of Planets and thus everything can be placed on the diagram of the seven-branched candlestick diagram which is presented to the candidate in the 1=10 ritual. 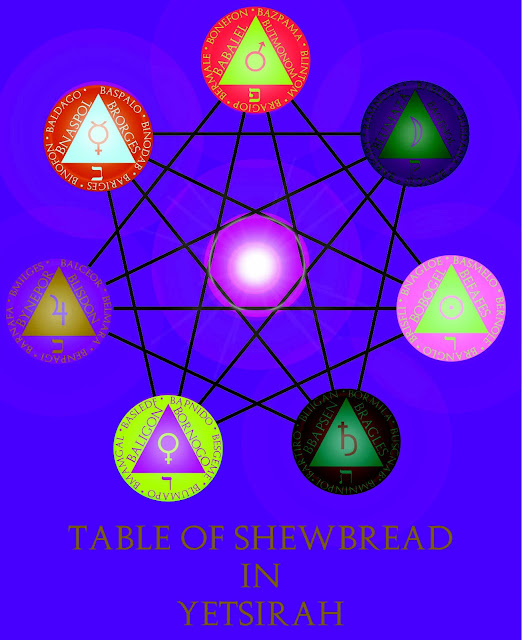 When a candidate is exposed to the seven branched candlestick diagram their sphere of sensation takes in an impulse from the Briatic level, this then flows downwards to the Yetsiratic level where the Bonorum angels work to bring through the divine image to the physical levels. They do this through manipulating those energy centres in the sphere of sensation that are under their planetary control. The the East these are called Chakras but the corresponding system in the West are the spheres on the Tree of Life.
If we look a the ritual we find that the description of the seven branched candlestick mirrors what we have looked at in regards to the Angels of the Bonorum.
We are told in the ritual that the seven branched candlestick relates to the Mystery of Elohim, the seven Creative Ideas and that the seven Circles, which surround the Heptagram, represent the 7 Planets and the 7 Qabalistic Places of Assiah. And the 7 Lamps before the Throne on another Plane. Within each circle is a triangle to represent the Three-fold Creative Idea, operating in all things. On the right hand side of each, is the Hebrew name of the Angel who governs the Planet; on the left side is the Hebrew name of the sphere of the Planet itself, while the Hebrew letter, beneath the base, is one of the duplicated letters of the Hebrew Alphabet, which refers to the 7 Planets. The 7 Double Letters of the Hebrew Alphabet,
But the ritual also gives us other clues to the meanings of these angels. It points out that each Angelic King controls seven directions Zenith, Nadir, East, West, North, South.
So then what can we do with this knowledge. After all it is all very well saying that you can make a direct link between John Dee’s and the Angels of the Bonorum and the Seven Branched Candlestick but what good is it to us to use these angels?
Dee was given the use of the Heptachic angels very early on in his magical career, long before he started messing around with any Enochian tablets. It seems to me that this low level yetsiratic form of magic is designed to work with the lower aspects of the self and in particular how we interact with our material world.
Practically then it is a system of Earth magic which works on the person’s sphere of sensation and onto the physical levels.
It is interesting that this is the one system of magic that Dee gives an example of a talisman and it is also significant that it is a healingtalisman. It could equally have been magic for money or job, or anything to do with the second, third, and fourth houses of the astrological chart – in short anything to do with the Earth element and the 1=10 grade.
In the 1=10 grade the candidate is supposed to start working on the physical levels as a precurser to their magical work. Normally the effects of the grade are to stuff up their finances and force them to look at life in a less escapist way. Illnesses are also fairly common in this grade. But these are all negative experiences, things which should not happen if the magician was working to bring about change in the correct manner.
The Heptarchic Angels give the student a way of working with these energies and participating in the transformation.
This article was originally published in the Hermetic Journal, which I recommend as a good source of serious Golden Dawn material.
Share on Facebook Share
Share on TwitterTweet
Share on Pinterest Share
Share on LinkedIn Share
Share on Digg Share