Skip to content
It does not matter what you think or say your motivations were for getting involved in magic, it’s almost certainly really going to be something to do with power. We want to be more powerful than our circumstances allow us to be. It isn’t because you want to serve the light, it isn’t because you want to help people or find the God within, or any other sanctimonious reason, it’s because you are attracted to a path that promises power. 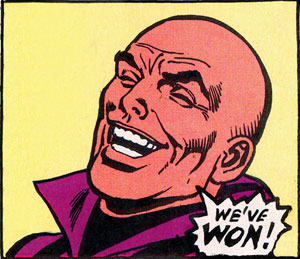 But  power is a bad thing, isn’t it? The bad guys in the comics like Lex Luther crave power and magicians want to be the good guy, the Superman. Yeah right, leaving aside the self delusion behind that statement for a moment, it is worthwhile pointing out that not only is Superman famous for being powerful, he only wins because he’s more powerful than anyone else.
When people join esoteric groups they write their initial motivations behind joining an occult group. They are almost always power related, even if the word is lacking from their application. You will find phrases like “I want knowledge” when knowledge is power. They will say that they are seeking Wisdom usually without saying why. It could be so that they are superior to someone who is ‘ignorant’. Even safe general phrases such as “I seek the Light of God” can be seen in terms of seeking power because normal people don’t ever get see the Almighty.
It is almost as if occult seekers are bending over backwards to deny that they are seeking power. It is a dirty word which nice spiritual types are not supposed to use in mixed company.
We’re taught that it’s better to be a team player than to be the captain, or in the chorus than in centre stage. This social programming is nothing more than a cop-out. It is those forces of darkness that want to keep you small. Those demons who want to keep you from becoming and expressing your true individuality. The message of occultism is that you are a unique expression of God and that doesn’t tally with a message from society that says we have to fit in and stay small and powerless.
However what draws occultists to this path is the fact that they suffer from a lack of power. They are usually the oddballs of the society who find themselves at loggerheads with the way their country is built. Some of this powerlessness is beaten into them by society and their families who want them to conform. Rather than fight their way into society they would rather sit back and moan about it in their various fantasy worlds; worlds that occultism makes all the more intense.  This is one of the reasons why people are drawn to power crazed nut cases who run occult groups. They appear to have power and will reflect their students own feeling of powerlessness. Many a water melon has been sacrificed to a leader’s paranoia and the students doing the attacks are not aware that they are damaging themselves and their own karma by doing the leaders’s bidding. If they had a healthier attitude to power then they would be less keen to give it away so readily.
These outsiders still crave power, but have to justify their lack of powerlessness to themselves. Therefore they invent copouts. They make society ‘material’ so that their ‘spirituality’ doesn’t have to mix with it. They seek to “escape the rat race” and thus allow such a system to continue unchecked. They talk about having spiritual cleansing, while at the same time are unable to find time to have a bath.
Searching for God is a quest for power. But it is not a power over others, it should be a self-power. Irritatingly the new age movement calls this process ’empowerment’ and unfortunately there isn’t a better word in the dictionary to describe it.
When we look at the nature of that self-power we get into the realms of that archetypal of Quests the Holy Grail. Although this allegory has been long castrated by those who would have turned it into a symbol of the Divine Feminine, the story is about the search for real spiritual power. Lancelot was powerless because of his neurotic love of Guinevere which was why he couldn’t see it.
His son who was an embodiment of spiritual power was able to take it. Bors, who was the average family man, also could experience it. The message is clear. Spiritual power is not for the neurotic or those who deny the truth in themselves and spend their time picking over their sins like old sores.
Our average occultist, who is starting the path, believes in him or herself about as much as he or she believes in the ability of a rifle to stop a rogue bull elephant with a bullclip attached to its testicles. They have a huge task on their hands attracting power because their personalities aren’t the natural place for such abilities to grow.
Most magical work involves visualisation that is charged with emotion and will. Basically you see something happening as clearly as possible and will it to happen so that it feels that it already has happened. You can enhance this process by the use of symbols which are a bit like pre-made visualisations. The goal of this is to make your visualisations alive and as real as possible.
Most people do magic every second of the day. They are just not aware of the process which is why they aren’t magicians. They get up and visualise what their day will be, good, bad, or indifferent. They charge these mental images, normally with their fears, and aren’t surprised when they all manifest. Those who believe in themselves, or find life good, tend to be more optimistic and therefore, when shit happens, it is usually happening to someone else.