Skip to content
There is an old bugbear about doing banishing after you consecrate a talisman. It all comes from Samuel Mathers who wrote at the end of the Z documents section on making a talisman that you should wrap up your talisman in silk. He said that you should not perform a banishing in the room because you will discharge the talisman completely.
Those who believe that Mathers spoke with the authority of God, or his secret chiefs, claimed that this piece of information is absolutely right. They tell their students that banishing will remove all the charge from everything in the room!
There are a number of reasons why this is rubbish. If a banishing removes the charge of objects in the room, the it means that all that consecration work you did on your tools is a pointless exercise. You put on your rose cross, lay out your lotus wand and four elemental weapons and do your banishing ritual of the pentagram and turn them into very expensive lumps of wood.
Er no. That does not happen and before you say “ah that is because you did not intend to banish those objects, I will have to point out that people that say “intention is everything” in magic usually do not play with the real stuff. What you intended is no help when the floor has turned into a perfect storm. Magic is a science. If a rule does not work then you have to find out why.
A well constructed talisman is built from the four levels of reality. It starts with a divine name, contains an archetypal on and then there is a Yetizatic one. Finally there is the physical talisman itself which is like a body for the other three levels.
The Lesser Ritual of the Pentagram can be used to banish the earth and lower astral levels only. Since the material basis of a weapon or talisman is simply the material object drawing a pentagram is not going to change is nature any more than you can use one to stop a speeding car. 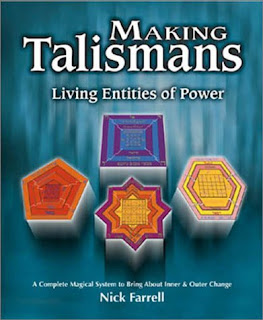 So the danger of a lesser ritual of the pentagram has to be to the lower astral connections to the material object.
In this respect, Mathers could have a point. After doing a ritual the link you have made between the talisman, or tool, and its astral counterpart is possibly weak. Banishing early in the life of the talisman or tool could be disconnected by the ritual.
However Mathers did not think that a similar relationship, that of a 0=0 candidate and their Higher Self was also weak. After the 0=0, which is the same ritual as the Z document, the candidate is told to banish and invoke often.
So Mathers then must think that the only applies to talismans or freshly consecrated tools.
I am going to stick my neck out here and say that Mathers is wrong. True it is probably not a good idea for you to put a talisman under any pressure after creating it until it has had a chance to settle down into its new body. But the ritual of consecration should be a lot more powerful than any lesser ritual of the Pentagram. This is because the lesser ritual works by raising the spiritual level of the room to keep the astral nasties out. A connection between a physical object and its astro-spiritual form would not be uneffected. Think about it. Do you lose the connection between your Higher Self because you did a banishing ritual? True, you are a little more spiritually robust than a talisman or tool, but the idea does not make much sense.
Neither does the idea of wrapping an object in silk. Silk is a good insulator if you think that spiritual force is the same as electricity. But if that were the case, wrapping an object in silk would cut the physical body of the talisman from the spiritual or astral one. It doesn’t so therefore the whole exercise is pointless.
Share on Facebook Share
Share on TwitterTweet
Share on Pinterest Share
Share on LinkedIn Share
Share on Digg Share