Skip to content
Firstly I have to say I am little biased about this book. Dean is the main partner in the publishing outfit we are both involved with. However, since I was not involved with the layouts or anything on this project I had to wait as long as everyone else to see a copy.
I first became interested in Enochian in the 1990s and was among a group which was not particularly impressed with the GD’s approach to it. That is not to say we didn’t try it. There were some glorious moments pathworking into the Enochian Aethyrs and some outright unpleasant ones. On the plus there was a moment where an angel predicted the Bosnian War which was something none of us knew anything about. On the negative side there were post ritual fainting and nose bleeds. There was a rough edge to it which we could not place. We decided that it might have had something to do with the way GD enochian was wired and so went back to John Dee’s Diaries. (Of course not being members of the Golden Dawn, none of us realised that it might have been above our grade). We started experimenting with using the same sorts of equipment, the seal, the table, and a crystal, which was used by John Dee and the rough edge started to vanish.
Then we discovered that the Golden Dawn system was based on a document called Sloane 307 which was written in the 17th century and was based on a reading of True and Faithful Relation, by Casubon. Casubon provided an edited version of Dee’s Diaries and so some of the important stuff was missing.
Dean’s book Enochian Magic in Theory fills in the gaps that have been left by the Golden Dawn and Sloane 307 by bringing together a lot of the research which has been carried out over the last 20 years on Dee’s magic system. In this book is all you need to do to go from A, to B, to C. Some of this material is elsewhere, but not of it is in one place. Dean brings the material to hand and explains it very clearly. 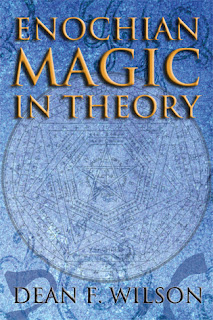 When there is some dispute about what Dee, or his Angels were banging on about, Dean provides both sides of the argument and gives his opinion. The opinion is valid and is based on his actual practices.
What I like about this book is that rather than going into what is called a Dee versus Golden Dawn Enochian split, Dean comes up waving the flag for the GD more than he snipes at it even while calling for a more Dee view. It is logical that the Golden Dawn did not get everything wrong and some of the developments, actually take Enochian in places where Dee could not go. However, where the Golden Dawn went a little off, Dean is the first to point it out.
There are a couple of books out there which do similar things, however there is a feeling of completeness about Enochian Magic in Theory. You could give it to a Golden Dawn Student and they would be able to go off and do something with it.
Dean’s theme is an interesting concept for those who believe that Enochian needs to be entirely like Dee did it. Dean believes that the Enochian Magic system was not designed for Dee at all. The logic of the argument is sensible. Dee was lazy. He was asked to make material and didn’t, given deadlines which he failed to meet, and seemed to be unable to deal with information which was outside his belief structure. Yet surprisingly the Angels continued to work with him and hand over a complete system.The only reason they could have supported him was because with Kelly as a skryer and a bright bloke to write it down, the system would be preserved for someone else who lacked these skills.
After the separation between Kelly and Dee, the material was taught to Dee’s inner circle but not expanded further by Dee at least. In other words it was waiting for the likes of the writer of Sloane 307 and the Golden Dawn to come along. So when you see Golden Dawn Enochian it is a matter of merging it with Dee not rejecting it out of hand.
I am interested in seeing Dean’s Enochian Magic in Practice, which is coming out next year. The voice behind this book is knowledgeable and it provides you with the information you need to know rather than getting side tracked. I am looking forward to seeing how he sees Enochian working in a practical way.
However I really recommend anyone who is interested in Enochian should buy this book.
Share on Facebook Share
Share on TwitterTweet
Share on Pinterest Share
Share on LinkedIn Share
Share on Digg Share