Skip to content
One of the early difficulties for an Order is that you get lots of members wanting to join and set up their own temples.
On one hand more temples good for the Order, it means that you can offer training in lots of different locations and effectively your teaching spreads. However at the same time, if you were to allow this, the quality of your training plummets.
If an Order is created by someone with magical experience, perhaps in different groups, who has made their own contacts and developed their own pattern of teaching they become a source for a base of founders.
These founders become the first wave of the “new” tradition. They are trained using the experience and contacts of the group’s creator. However they have to go through complete training of the system or else they are undeveloped themselves. They cannot pass on anything to anyone because they have no experience of it. 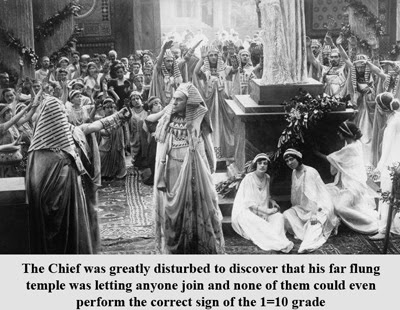 For the growth of an Order this is a period of waiting. If the founder members survive their training then they can pass on the system to others and create new groups based around their own founder members.
The temptation is always to rush this process to get the maximum number of groups. Take for example the Magical Order of the Aurora Aurea. We have groups in Dublin, Slovinia, South Africa, Italy and England. As yet none of these can initiate because the leaders of those groups have not completed their training. People have to come to Rome to be initiated. This slows everything down considerably and effectively rules out any “global domination” plans for the order in the short term.
While waiting for their leaders to be trained, these groups hold meetings and gain ritual experience. Most groups hold Anticums which are public versions of the rituals which outsiders can join in and see if they are interested in the energy and philosophy we have.
It also means that these groups have an evolving egregore which develops over time until the group finally has an initiated leadership. A MOAA “warrant” is a sign that the egregore has evolved to the point where it can handle the energies of a full temple.
But Heirophants have to not only to carry out their own personal work but face additional training so that they can do the job. You cannot hand a person a copy of the Z documents and tell them to get to it (for a start the Z documents do not cover any grades but the 0=0). This is specialised stuff and not for everyone. Because someone has reached 5=6, it does not mean that they are an initiating Hierophant, any more than that grade symbolises that they are a seer, an exorcist or any of the other specialisation.
All this need for training stands in the way of a group speeding fast but it also means that there is more within each group to hold it together. If I was to give a warrant to three people and a token adept’s grade, as was done in the GD, and told them to get to it, the net result would almost certainly be long term trouble. The new group would have no training, no philosophy and be only able to initiate into their own ignorance. Given that people believe all sorts of myths about the GD (such as the meaning of the Lesser Ritual of the Pentagram) until they are trained out of them you would be spreading ignorance. The fact that you are giving a token grade out to someone, means that they have not had to deal with the lower self. Their egos will inflate and the group will soon fall apart.
At this point it comes down to a choice. Do you want a big order where people are simply playing at being magicians or do you want one which actually does what it says on the tin but moves slightly slower? Is the temple a place for the mutual masturbation of the egos or is it a place of training for serious magical work. Are grades hollow declarations of status, or are they symbols of true spiritual attainment.
In the case of the initiates who have had to come to Rome for initiation it has become like a spiritual quest. Something that they value and has meaning. They might have had to make sacrifices to obtain it over and above their personal studies. They are not able to come as often as they would like because of financial considerations. But this turns out a more dedicated founder member of a future group. They have made sacrifices to obtain it.
The issue of Adept training also comes up. While many groups are happy just to use Regardie for their adept work and that is it, in MOAA adept work is extremely involved. Regardie is just the tip of the iceburg for a series of projects that an adept has to come out with. An adept is by nature a researcher and has to come up with their own material too. If they are a founder member of a group, then that should evolve in that direction too. None of the stages in MOAA are taken lightly and the forming of a full temple is probably one of the biggest pieces of work a person can take on.
There is an old gag about Alexandrian Witches.   “How many Alexandrian witches does it take to change a lightbulb?
“One to be the high priestess who orders her priest to change the lightbulb and about 50 to a 100 of their mates pulled in off the street to assist in this great work of magic which was practiced in this manner since Ancient Times.”
If we are not careful it can be changed to  how many Golden Dawn magicians does it take to change a lightbulb?
One to be the Exempt Adept who, as Imperator of the temple holdeth the true lineage to Ancient Egypt, who shall, in accordance to the ancient cipher, bring forth  two others he hath met in a pub and shall grant unto them the grades of Adeptus Major and Adeptus Minor, so that they shalt recruit ye local masonic lodge, and anyone else interested,  to uphold the Lightbulb so that the light shall shine in the darkness and the darkness comprehendeth it not.
That is not to say that a person cannot make their own contacts and studies and form an Order of their own.  It is just that once they do, they are forced to look at this vexed question.
Share on Facebook Share
Share on TwitterTweet
Share on Pinterest Share
Share on LinkedIn Share
Share on Digg Share