Skip to content
I was going through my pile of NISI AO manuscripts to help a friend with a research project and I found something a little surprising.
In amongst the knowledge papers was a list of the titles of tarot cards and their numbering (see picture). It is important to realise that this was post Golden Dawn and Samuel Mathers was fully entitled to break with tradition. However, he was extremely pleased with his contribution to the Golden Dawn tarot and particularly the numbering and allocations to the paths.
Given that these paths are now considered standard, it seems a little odd that Mathers’ AO appeared to go back on them and returned to the traditional system. 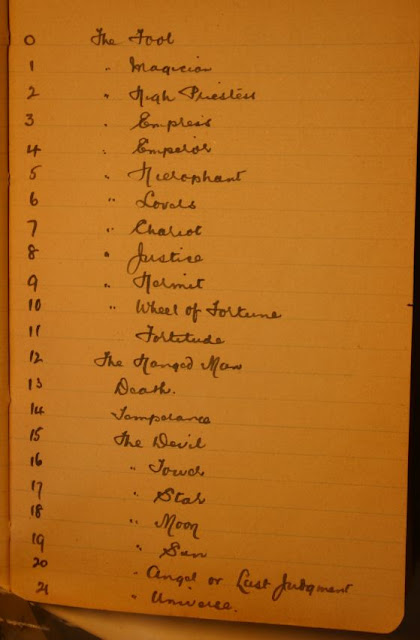 There are some other interesting things on this list, including the alternative title for the Judgement card as “The Angel” and the more traditional “Fortitude” for “Strength.”
But the flipping of Justice and Strength is the biggest eye opener. Given that this was a knowledge paper, it would have meant that all the AO students would have copied it and had to memorise it.
One does wonder if Mathers had started to use “blinds” in the outer order so that his students would effectively have been knobbled from using his knowledge until they had been around long enough for him to trust him.   If that was the case he would have had to have given them a corrected numbering later, or maybe he had simply abandoned his old theory.
Still, it is surprising that this reversion back to the traditional numering and the flipping of Strength and Justice by the AO has not been noticed before.
Share on Facebook Share
Share on TwitterTweet
Share on Pinterest Share
Share on LinkedIn Share
Share on Digg Share