Skip to content
I have been reading Templeof the Cosmos by Jeremy Naydler and he hits some rather important points which some neo-pagans might not like much.
The book looks at what the Ancient Egyptian worldview would have actually been and how this could have led to many of religious ideas.  What Naydler accidently does is put a spanner in the works of would be neo-pagans who wished to create a modern form of Egyptian worship with their worldview. 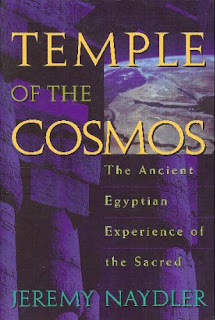 If Temple of the Cosmos is to be believed to get a real Egyptian religion you would have to short circuit many of the modes of thinking of modern life.  Naydler believes that the world that the Ancient Egyptians had was one where their myth, time and material universe were intertwined.  All actions around you were your interaction with the divine myth.
For example when the Ancient Egyptians built a statue to the gods they were not worshiping an idol that they had made.  Their mind-set was such that the statue really was the God or Goddess.     When they looked up at the sky they saw the eye of Horus looking down on them. Nature mimicked the myth of transmutation and initiation.
This is great stuff.  Sometimes the book gets a bit lost in academic verbiage and its point gets missed because Naydler has fallen into saying something that actually sounds more complex than it actually is.   Practically we see that there are huge problems for people who want to adopt a way of life or magic which mimics the Ancient Egyptian mind-set.  It cannot just be that you like cats and wear tons of Egyptian-style jewellery.  You have to be able to apply Egyptian myth to every aspect of your life and not just that which is fluffy.  It is one thing to look into the night’s sky and see Nut stretched over you, it is quite another to see your boss as Set.
Naydler also makes it clear that much of the real spirituality behind the Ancient Egyptian mind-set was down to the actual movements of nature.  The colours of Osiris, for example, become more meaningful when you know the colours of the Nile when it floods.
Where is your Pharaoh now?
The Ancient Egyptians regarded their Kings as important parts of their religion.  How can you equate your modern politicians with an incarnate God?  It would be difficult to fit David Cameron or Silvio Berlusconi into any scenario where they would be worthwhile let alone divine.
The problem that modern people have is that they have become disconnected from all forms of myth or any gods.  In the West, we can blame science for this, but we can also see that the Ancient Greeks had a role in rationalising away much of this mind-set.  The Ancient Greeks at the time of Homer certainly still had it.  The odyssey is packed full of myth woven into “fact”.
There are some important points to note for magicians too.  In magic there are a lot of references to the Secret Tradition.  What if this tradition was never really secret at all, but a mind-set which was forgotten.
Reading through this book you can see that magical technology reflects some of these ideas.  The idea that a priest was not just wearing the mask of a God, but really was that God, is something that many Golden Dawn magicians need to understand.  It might be that we can only duplicate the Ancient Egyptian mind-set within our ritual space, but it is there that we should be doing it.
We should be striving to make sure that whatever we are doing in our ritual space is real, we should not just believe it to be true, but know that myth has overcome any form of “reality” as we know it.  This is closer to the Ancient Egyptian way and could be one of the forgotten secrets.
Anyway I recommend this book for those who, like me, like to root their magic in Ancient Traditions. But it is also useful for those who want to understand the core of magical methods.  Those who think that they have past lives with their cats in Ancient Egypt and put their religion as Ancient Egyptian on the census form might be a little disappointed.
Share on Facebook Share
Share on TwitterTweet
Share on Pinterest Share
Share on LinkedIn Share
Share on Digg Share