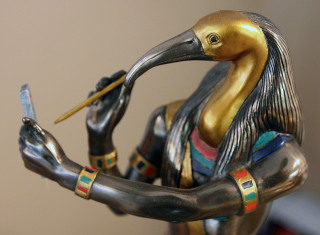 For a long while I have described the Magical Order of the Aurora Aurea as a traditional Golden Dawn group. From today it is not and we will stop describing ourselves in that way.
MOAA will no longer look to the past for any particular knowledge or security, but to its future.  And rather than trying to pour new wine into old skins we will be more secure in our own independence and ability to move in our own direction.
The word “Golden Dawn” has come to mean the tradition which encompasses all its off-shoots including the modern renditions of the Stella Matutina, Smaragdum Thallasses and the AO.  However most of these traditions do not run anything like the original Golden Dawn and have been chained to an egregore which is largely hostile to and undermines their activities.
The Magical Order of the Aurora Aurea, with its emphasis on experimentation and developing the magical tradition is completely at odds with this “golden dawn” egregore. In fact in our opinion this particular egregore has done its best to commit suicide over the last 20 years.    Its use by Greek Fascists has placed another nail in a coffin which has been sledgehammered by people trying to turn it into a cult or a business, or by kids, armed with a copy of Regardie trying to set up Magical Orders without knowledge or ability.
It should not be necessary to summon the ghost of a long dead and dysfunctional order to prop up an order which in most cases works much better.  Self-confident groups which have something real to offer do not need to evoke the past to describe what they are doing now or in the future.
In any event the historical Golden Dawn egregore is nowhere near as magical as the groups that replaced it and is a quasi-masonic shadow of the modern groups that bear its name.   In our view the use of this egregore actively works to undermine the ability of good groups to function within the 21st century.
That is not to say that the “Golden Dawn” methods do not work.  Indeed the Magical Order of the Aurora Aurea will continue to use the rituals and general structure of the Smaragdum Thallasses (Whare Ra) order, which was descended from the Golden Dawn but resolved its egregore problem by rewiring itself.
As Smaragdum Thallasses found its own roots to a hermetic source independent of the Golden Dawn, so has the Magical Order of the Aurora Aurea.  We have developed our own contacts and method of using the Smaragdum Thallasses system and have our own set of goals which we feel would be constrained by continuing to adopt the old Golden Dawn egregore and name.
Magical Order of the Aurora Aurea will also be seen as being part of a wider “golden dawn community.”   To most people looking at our system we would probably appear to be a bunch of “Golden Dawn people” who emphase magical techniques, but at a deeper level, particularly within our second order, we are not and I feel it is time to make that clear.
In many ways this statement makes us “new” and will be the beginning of work we will be doing to distance ourselves from the “golden dawn” egregore and evolve our own connect with the source behind it.  We will be updating our websites and material accordingly.  While Aurora Aurea is Latin for Golden Dawn, placing it in a “dead tongue” means that it goes to a “different place” and or own lineage and egregore.
MOAA continues to be a traditional magic order, but is not a traditional Golden Dawn order.
The goals of the Magical Order of the Aurora Aurea:
1. Fuse the Inner and Outer plane traditions of the Smaragdum Thallasses (as expressed by the Dion Fortune tradition and the pure Golden Dawn).
2. To develop a scientific and individualist approach to magic.
3. Restore a balance between religions within magic so that a person might develop their own religious understanding free from any dogma.
4.   To provide magical training to those who are ready using the latest communication methods.
5. To experiment with new methods of magical expression and to share that information.
6. To eliminate any discrimination within occultism on the basis of sex, religion, race, sexuality or beliefs.
7. To establish better communication between Western Mystery traditions to the enhancement of our own.
8. To encourage each student to develop their magical gifts to the best of their ability so that they can take a pivotal role within an evolving humanity.
10. To assist a student and adept in the attainment of their own spiritual destiny.
11. To continue to study and adapt the Smaragdum Thallasses system.
12. To create a magical order where practical techniques are given priority over intellectual understanding.
Issued in the Hour of Venus on the Day of Venus
20 December 2013
Share on Facebook Share
Share on TwitterTweet
Share on Pinterest Share
Share on LinkedIn Share
Share on Digg Share