Skip to content
The Order of the Golden Dawn makes a lot of use of the Egyptian God Thoth as one of the primal forces behind the Order. There are a number of good reasons for this, most of which are buried in secrecy. Not the secrecy in that they are protected by oaths but he secrecy that means they cannot be expressed and need to be found out. Words that are written down are not the real secrets of magic but shadows of an unexpressed truth. Once you know even a hint of them them, you are given a cosmology and a theory of magic which applies to the entire system, particularly the Golden Dawn’s Z documents. 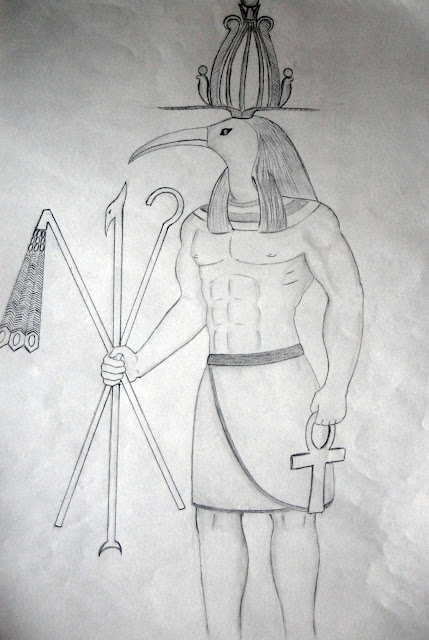 There are many myths in connection with the birth of Thoth, but the one which is most interesting links him to Neo-Platonic thought which found expression within the Golden Dawn.

The Egyptians believed that before the Universe existed there was a watery mass of dark, directionless chaos. In this chaos lived four frog gods and four snake goddesses of chaos who interacted an created an explosion which formed a mound of earth to rise from the waters. This was the Milky Way which became identified with Hathor. On this mound Thoth, in the form of an Ibis, laid an egg and from this egg came Ra and the other Gods and thus the Earth was created.
The Neo-platonic idea of creation is that the First Mind is unknowable. In fact it can only be defined by what it is not. It is similar to the cabbalistic idea of the Ain. It is No-Thing and everything. But for some reason, unknown to us, this First Mind decided to create. A focus of itself created the Second Mind which formed ideas and from these ideas creation was built. This Second Mind was the Logos, or Word. This is what John’s gospel means when it says:

The word Logos means a lot more than just “word” it also means logic, reason and mind. These were all things that were directly attributed to Thoth. To the Egyptians words created the universe but also bought Order to chaos. This is why Thoth’s wife was Maat, who represents cosmic order, and his mistress (lesser wife) was Seshat the goddess of writing.

By looking at these two different systems we see similarities. The first mind decides to create and instantly Thoth is present to create the world out words, ideas and stories. From these ideas come the gods.

These are not literal Gods but seven primal ideas (eight if you count Thoth himself). Metaphorically these primal ideas are better seen as colours of the visible spectrum rather than actual beings, or superficially their planetary attributions.
What humanity did was to place masks of myth and attributions onto these primal gods. Each of these seven is two faced having both active and passive sides, which symbolically became male and female, husbands and wives.
This process happened through-out each culture with each society picking a different colour to lead them. Roman culture for example choose Jupiter and Juno to lead them until replacing it with a very Jupiter and Juno form of Christianity.
Sometimes these Gods were made into monotheistic cults, but their inherent separateness from “Thoth” or the No-Thing. Is your god or goddess loving, mighty, just, truth etc? These are ideas. A real One Thing is not these things and is paradoxically all of them. Christianity has reflected Venus (or green ray) love cults, a solar cult and saturnian rays. Judaism shows signs of Saturn, Jupiter and Mars. Muslims are a mixture of Venus, Mars, Saturn and Jupiter rays. Even the different flavours of Buddhism emphasis different rays with some liking Saturn with others are more Mercurial. While it is possible to argue that such “ray influences” are contaminations to the idea of Monotheism it would be hard, for example, to imagine any of the Judio-christian religions without an emphasis on death and the law (Saturn) which are ideas and not the way the No Thing works. Buddhism requires its followers to follow a path and rules just as much as the Moslem faith, and these too are Saturnian.
No magician should look to create a universe from a single fragment, or sign up to a single expression of a God or Goddess. They should know that the universe is created within the One Thing and not look to Gods and Goddesses to provide them with personal salvation.  Instead they should be working to try and unite those forces and get beyond them.
Thoth is interesting because he is both a creator and appears in the Egyptian Myths as an arbiter and a balancer. As a god he is bringing all seven of the primal forces into balance (normally associated with his wife Maat). What this implies is that all the seven rays are illusions, reflections of Thoth-Maat’s Truth. All actions and reactions are observed by Thoth who acts to restore the balance when things get out of hand. He does this not by the standards of law (which would be Saturn) but by the standards of the One Thing’s plan.
This places Thoth in an interesting position, one which would normally be attributed to a Solar force – that of Redeemer. I do not mean that “Thoth died for your sins” that is a solar cult thing, but rather that Thoth is the abstract force that restores the balance and makes sure that Creation does not stop.
If you think of it in human terms, if the Universe was a person it would always make the same mistakes and never learn. Thoth makes sure that every experience results in evolution. So while it appear that history repeats itself a lot, it never repeats itself in exactly the same way ever again. Thoth is the One Thing’s way of forgiving itself and restoring balance.
As the writer of John’s gospel worked out, this makes Thoth Christ. Thoth is the word, and the logos and he is the great force of redemption in the universe. He does not, as a solar ray deity does, need to be sacrificed. Thoth knows that deep redemption happens in the universal mind, which has nothing to sacrifice anything to.
So where does Thoth sit within the Golden Dawn? In the outer order he has two places within the temple. The first is that of the Cancellerious which is a superficial understanding of his role as a god of letters. But also he stands behind the four chiefs as the sum total of all of them. He is the divine mercury which is created from the salt of matter.
In the Second Order it is through Thoth that all Z document happens. It is he who sets the template for the idea of magic working. This places the Golden Dawn magician in an interesting position. The idea of magic is seen as above the seven primal gods, but at the same time uses them.
The Particular Exordium of Z1 describes Thoth standing at “the ending of the light and the limits of Night” In otherwords he is the Alpha and Omega who stands at the dawn and sunset before the unborn ones of Time. This is a reference to the Gods who are sitting in their egg waiting to be born.
Before Ra leaves the cosmic egg, there is no time, no day or night.
Then the universe is created and the “AEONS of the Bornless Beyond” are born. In other words these are the seven primal gods or rays.
“Then was the Voice (ie the Logos, Thoth) vibrated: Then was the Name declared.”
Thoth stands at the threshold of the Entrance, Between the Universe and the Infinite, in the Sign of the Enterer while the Gods energy. Mathers’ blurs this by claiming that the threshold of the entrance was the 0=0 grade, however the implication is clearly macro-cosmic too.

“In Breath did he vibrate them:
In Symbols did he record them:
For between the Light and the Darkness did he stand.
Thus are the Formulas of wisdom.”

Put basically this is the Neo-platonic view of the creation of the Gods by Thoth and the formula of magic which can be used.
When a Golden Dawn magician vibrates they are calling into creation the seven primal gods who work the rite of magic, whether it be an initiation or something minor. In essence they are working with the magician to create a new universe using the same method as Thoth.
This is the reason why the candidate stands between the pillars in the 0=0 ritual. They are standing between the ultimate light and the ultimate darkness, just like Thoth, and are creating a universe in their own sphere of sensation. Throughout their occult career they will initiate themselves in into the seven Aeons or rays and return to Thoth and look to the greater mysteries of the One Thing.
Share on Facebook Share
Share on TwitterTweet
Share on Pinterest Share
Share on LinkedIn Share
Share on Digg Share