The Triangle of the Art comes from the Grimoire tradition of magic.  Its function was to concentrate the spirit being invoked into one space so that it could be seen visibly.   It first appeared in the Lesser Key of Solomon the Goetia where its function was to constrain and force evil spirits to manifest. 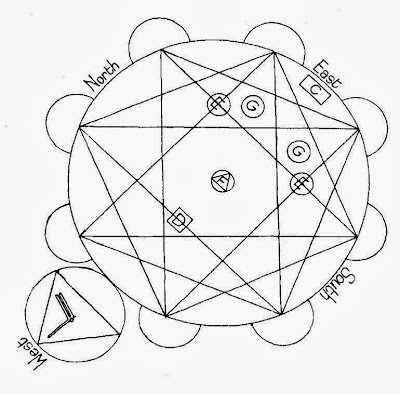 We have very few accounts of Golden Dawn evocation magic and the most famous is the account published by Pat Zalewski in his Talismans and Evocations of the Golden Dawn.  That was a ritual which was written by Alan Bennett (Frater Iehi Aour “Let there be light”) and was designed to get the nearly unpronounceable spirit of Mercury TAPHTHARTHARATH to physical manifestation.
What was telling about this ritual was that it used a triangle of the art to manifest the spirit outside the circle. Bennett’s triangle of the art was not that used in the Goetia, in fact it was a simple triangle enclosed in a circle. The circle outside the triangle would help to constrain and concentrate the spirit by effectively placing it in another reality.  In the triangle, Bennett placed a sigil of TAPHTHARTHARATH to aid its manifestation. This is a key part of understanding the Golden Dawn Z2 instructions for evocation .
One of the areas that Bennett suggested that followed the Z documents, was that the triangle was placed in the point where Mercury was in the sky at the time of the ritual.  However, in the case of evil spirits he suggested it should be placed in the West because this was where the Qlippothic spirits should be.  This is pretty daft because it implies that spirits such as  TAPHTHARTHARATH were evil and needed to be treated as unbalanced demons.  It is fair to say that the last thing you want to do in an evocation is bring anything out of the lands of the West.  Then there is the small problem about what the magician does when you are invoking an Angelic force.  These are only some of the sorts of problems that the early Golden Dawn adepts had trying to fit the Z documents into the Key of Solomon texts.

Mathers’ Goetia translation was released unfinished by Aleister Crowley, who had financed it and wanted his money’s worth (he more or less claimed to have written it).  Since this happened a long time after the collapse of the Golden Dawn,  it took some time for the Golden Dawn community to realise that it was not a work of the Great Beast, but potentially a Mathers paper.  Copies of the “Crowley” Goetia ended up on the shelves of some Whare Ra members and it was this triangle of the art which was adopted in their private rituals.
This classical triangle of the art was the one I have used for many years without questioning it.  Then I started to wonder why the Goetia’s author used Greek names as these did not strike me as having the necessary cabbalistic power to do the job required.  In addition with the exception of Tetragrammaton the names did not make much sense – what was an Anaphaxeton?   It is fairly clear that the three are supposed to be names of God, but it was not clear which ones.
Tetragrammaton just means “four lettered name of God” and we know that is YHVH יהוה.   so it was possible that the other names were also Greek instructions for Hebrew names.
Primeumaton means literally “the first name”.  Indeed the Goetia says that the name means: “Thou who are the first and the last, let all spirits be subject to us and let the spirit be bound to this triangle which disturbs this place. In the first verse of Genesis the name of God mentioned was Elohim אלהים.  “In the beginning Elohim created the heavens and earth.”

So far I was happy as the divine name of Binah was YHVH Elohim and this connection made sense given the function of the triangle was to bring something into manifestation.   But that still left the name Anaphaxeton to find meaning and ritual function.
Mathers’ translation of the Goetia in the chapter on the Magical Triangle of Solomon said that “Anaphaxeton” is sometimes written “Anepheneton” but this is not much help either.
Mathers had written in the Key of Solomon Chapter VI that the name ARPHETON, and in the name ARPHETON, “by which the angels who are destined to that end will summon the Universe, in visible body and form, and will assemble (all people) together by the sound of the Trumpet at that terrible and awful Day of Judgment, when the memory of the wicked and ungodly shall perish”.   Then Mathers had written a footnote saying that this name was sometimes replaced by Anapheneton, or Anaphaxeton.
The name was connected with the more martial aspects of God, but its use is not complete until you consider the Goetic prayer that Anaphaxeton was supposed to represent:  “Thou great god of the entire heavenly host.”  The great god of the heavenly hosts was Tzabaoth ,  Tzabaoth  is the plural form of “host” or “army” and used as a divine name in its own right.  In the Golden Dawn it was part of the divine name of Hod and Netzach.
This would mean our triangle would be bounded by the divine name YHVH ELOHIM TSABOATH or the Lord the God of Hosts.
Using the name Elohim beginning with the letter Aleph and Tsaboath beginning with the letter Tsaboath you could read the meaning of the divine name around the triangle as:
YHVH the beginning and the end,
Lord for eternity
The Lord, the first and the last
Eternal God
God the Alpha and the Omega

[1]There is no room in this article to explain this in detail. Generally, what happens in a GD evocation is that the adept initiates a pentacle which gives him control over the being. With a sigil in the triangle of the art, it means that what happens within the circle also has a resonance with what is happening in the triangle. As the ritual purifies and consecrates, and creates a simulacrum of the spirit within the “subjective” circle, it is having a direct effect on the “objective” spirit being evoked in the triangle. If the sigil was not there, it would make it difficult to get a physical manifestation because the triangle would be in a “different world” from the circle with no point of magical connection.