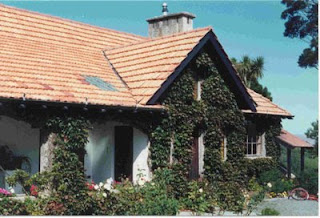 Whare Ra’s reputation for being the world’s most enduring and thorough magical order took a battering this week after it was discovered that the Golden Dawn order lived with a glaring mistake for more than 60 years.
Whare Ra operated successfully in Havelock North from 1916 until the late 1970s making it the most enduring and successful Golden Dawn orders.  Its training programme was rigorous and detailed and created adepts who trained other generations of adepts.
But it appears that the system had flaws including a brilliant howler which went un-noticed by Whare Ra members, and people who studied the history of the group afterwards, including me.
The Whare Ra pillars have been preserved by the Chivalric Hall  Society in Havelock North.  There they have been studied, measured, their cartouche’s copied into several books and compared with those created by Regardie.
Then this week I was contacted by the Felkin Society Trust who were curious to know if I was aware of any unique tradition regarding the Whare Ra pillars.
“We have gone through all the paperwork, including Regardie, Mathers and articles on the pillars within the Golden Dawn tradition and we can’t find a reason for it.”
The problem is really obvious if you look at photographs of the pillars and know there is something wrong. 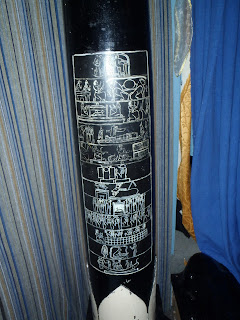 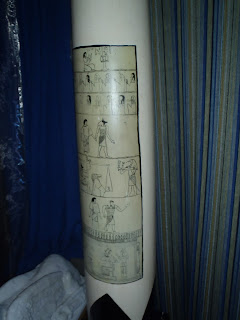 Can you see what it is yet?

The cartouche for the white pillar has been placed on the black pillar and the black pillar on the white.    This would have taken a lot of effort because they painted the images in reverse colours.
It is enough to give any pedant a stroke, given the fact they seem to have apoplexy if they see a comma wrote in a ritual typescript.  My first thought was that someone had repainted the pillars and flipped them (the pillars do have a fresher coat of paint) but that would take an even bigger effort (ever tried to cover black paint with white?) and would not be a logical thing to do as you would be literally trying to make a cover-up
What difference does it make?  Well, not much really. The white pillar is supposed to contain all the second order mysteries and the black one the first Order.    It is obvious as the First Order is all about the Judgement hall of Maat  and this shown on the black pillar.   Much is made of this in the Whare Ra portal ceremony.
But what it does mean is that for 60 years Whare Ra used dodgy pillars.  It is inconceivable that no-one noticed the fact and it must have been something that was continually discovered and forgotten.  Perhaps marine archaeologists might uncover the bodies of those neophytes who were dumb enough to point out the mistake wearing cement shoes in the waters of Hawkes Bay.
Otherwise I would expect to have seen a flourishing “oral tradition” among Whare Ra members which explained why they had a different set of pillars from the rest of the Golden Dawn and indeed the Stella Matutina.  The fact that there was not one, nor had anyone mentioned the mistake, probably meant that they had not noticed.  Hell, I have sat with the things in front of me for hours and I didn’t spot it either.
But if any of this blog’s readers might have a reason why Whare Ra flipped the cartouches on the pillars we are going to have to put this one down to a cock-up which no-one noticed, or cared about, for more than 60 years.

It is starting to look like it was deliberate, although I can’t say I agree with the reasoning.  Pat Zalewski replied in his group:

I actually addressed issue this in my 0=0 book some years ago and also in my GD Ritual Commentaries book(pp.127-132). It is more of a case of “Whare ra gets it right” rather than the other way round. The drawings on the pillars that Brodie Inness gave relate to both the 0=0 and 5=6. The problem was the 0=0 was on the white Pillar and the 5=6 was on the black. Felkin solved the problem and switched it back to match what was being taught. You can also see this from an alchemical colour perspective as well the Blackening to the Whitening. I don’t have a date the pillar drawings were issued out in the GD that Regardie published but Tony Fuller may be able to help there. In my books I left the pillars in the GD colours for the sake of tradition with a caveat of what was taught at Whare ra and why. I have also broken down
The pillar plates to match aspects of the 0=0. I am firmly siding with Felkin here, regardless of what Brodie or Mathers had on their pillars. I am told some temples never had any plates on them at all. THE Z PAPERS MAKE THIS OPTIONAL- WHICH IS A GET OF OF JAIL CARD IF THEY GOT IT WRONG.

The reason why the S.M. swapped the shoulders the sashes are worn on ( they were trying to match the pillar inscriptions to the First and Second Orders rather than the Pillars themselves)… The G.D. and the A.O. wore the black sash on the right shoulder and the white sash on the left shoulder – if you lay down on the Temple floor on your back with your head in the East and your Feet in the West you get the picture

In my view this makes a symbol which is simple too complex. In the Mathers paper on the pillars it was fairly simple. The black pillar always represented the first order while the white the second order.   The drawings therefore represented a process in a logical sequence.  The scene in the Judgement Hall is perfect for the 0=0, but has little to with the 5=6.
The ciphers are not specific about what spiritual diagrams you should use (Mathers used the book of the dead). The original golden dawn hung the drawings from its square pillars (it meant they could be taken off for other grades)  and had images of the Kerubs placed on the tops.  The pyramids were wood through which a candle was threaded.

The 125th chapter is to do with Judgement and the 42 assessors.   Its symbolism is to do with judgement after death (as the anon commentator points out below). Almost everyone is familiar with this chapter.  The 17th is more obscure, indeed a big chunk of it was missing from the Ani Papryus.
However the entire 0=0 is to do with recreating the 125th chapter particular scene.  It would be strange if it were associated with the post 5=6 state of being.
Anon commentatorr (below) makes the point that the white pillar is after death and the black pillar is before.  However that does not work as both of the chapters of the book of the dead are post death states.  The 125th chapter is judgement, while the 17th allowed him to go forth in the afterlife in any shape he wanted.  It was also designed to provide the dead person with the esoteric knowledge they needed in the afterlife.
Where Anon commentator might be correct is that the spell can be recited on earth to create magical effects.  It is formatted like a question and answer session which suggests an initiation sequence.
But the 17th chapter is incredibly involved and certainly beyond the scope of the first order.  It is also more focused on the evolution of the spirit so that it is connected to Ra.    After rising with Ra in the morning, itt ends with the image of Rehu the lion.  Rehu was the phallus of Ra. This would be perfectly acceptable image of second order work.
Since it appears that the flipping of the pillars by Whare Ra was not a mistake, then we are left with the question “why?”   You could argue that the 17th chapter happens before the Judgement Hall, however the Book of the Dead is not linear (or literal) and the numbering was a more modern scholar’s technique.    It also required Whare Ra to change the sashes around.